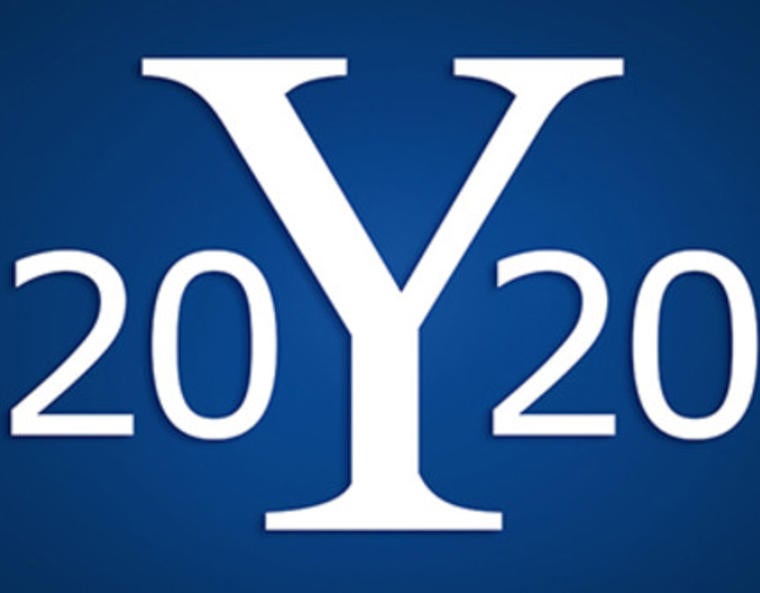 At the time of starting this first sentence, it is 10:30 PM EDT on April 25th, 2020. This particular date is important because, exactly four years ago from this very moment, I was sitting in the basement of Trumbull College, eating my very first buttery chicken nuggets, and surrounded in person for the first time by the friends I had met online back when we were accepted in December 2015. It’s funny because I don’t know why we ended up in that particular buttery, and it took me about a year to find it again and realize that’s where I had sat for a good two hours just talking to everyone I saw. From there, I remember going back to Old Campus to my host’s suite in Welch Hall, where I had some of the best sleeping-bag-on-the-floor sleep of my lfie.

Earlier that morning, my mom had driven me two hours to the Atlanta airport, from which I would be departing to the three days I had been looking forward to for the past four months: Bulldog Days. For members of the class of 2024 whose Bulldog Days had to be cancelled, I want to just share some highlights of mine alongside the virtual 30 Bulldog Days of April that the admissions office has put together:

3:00 PM: I arrived at Bradley International Airport, where I met another Yale admit from the south who rode in the GoShuttle van to campus with me. We figured out we kind of knew each other in a really convoluted way: my boss was from her hometown, and she had gone to school with one of his daughters before they moved to MY hometown. Small world, already!

4:00 PM: Our shuttle dropped us off at the magical “Phelps Gate” (the main entrance of Old Campus, where most first-years live) and I navigated myself and my suitcase to Dwight Hall, where admissions employees in matching t-shirts handed me a white card that would open (almost) every single door on campus and another card that would pay for my meals in the dining halls. I texted my host and met him outside, and after briefly dropping off my stuff in his suite, he had to go to class, but one of his suitemates was nice enough to walk with me to Woolsey Hall, where a bunch of friends were watching the Yale Symphony Orchestra rehearse.

4:15 PM: I finally saw all of the people I had been talking to online in person. Hugs were had by all, “I expected you be taller” was heard a few times (I guess I exude tall energy?), and soon we were off to wander campus and run into more people we knew from the Internet. How hard it must have been to go to Bulldog Days before the advent of social media, when you had to show up knowing no one and actually introduce yourself to people!

5:30 PM: My very first meal in a Yale dining hall was had in the Morse dining hall, where a bunch of us sat out on the patio next to the fountain. A highlight of this dinner: it was the first time I met my best friend Helen (from the Masquerade post), and as soon as she appeared behind me, I announced “It’s Helen!” Reader, her name is actually Helena, and I don’t know why I left the A off, but I’ve never called her anything but Helen in the four years since. 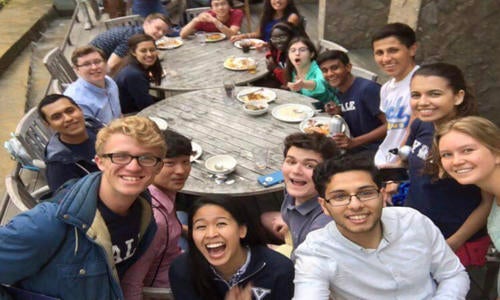 6:30 PM and onward: I’ve never felt more popular than when I was leading a giant pack of people who I only knew tangientally out the gates of Morse College and off to who-knows-where. We went to so many events and panels and free food buffets that night that I couldn’t begin to name them all. A highlight was the student performance showcase at the Shubert Theater, where I really realized that I was about to be surrounded by some people who were more talented than I could ever hope to be in so many things I would never dream of trying. 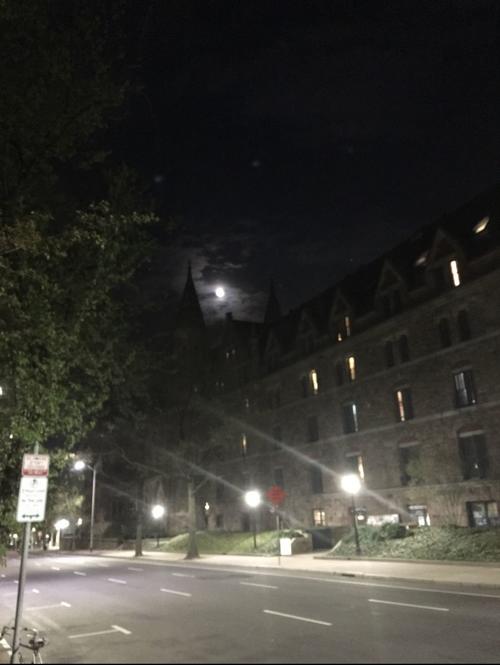 I remember taking this photo late on the first night on my way back to my host’s suite and thinking “Wow, it’s weird to walk to places.” Now that I’m home again, it’s weird to drive to places.

2:00 AM: My head hit the pillow on the floor. All of my host’s other pre-frosh were already sound asleep, and I had to use the flashlight of my phone to avoid stepping on anyone.

9:00 AM: All of the QuestBridge admits, myself included, congregated for breakfast in the Saybrook College dining hall, which two months later would become my own residential college. It wasn’t meant to last because the new facilities and new friendships of Pauli Murray Collge would call my name just a few months into my freshman year when transfers opened!

10:00 AM-5:00 PM: SO many more panels and events, including a highly-attended question-and-answer session on the sciences at Yale that I remember making me think “Hey, maybe I’m not a STEM guy like I’ve always thought I was!” Trust your intuitions! It also rained a lot this day, so I went to the Yale Bookstore with an internet friend to buy umbrellas, but we walked out with around $200 worth of Yale-branded merchandise between us, including my Yale Vineyard Vines Shep Shirt which I still love to this day and have worn to every hometown high school admissions ambassador event. 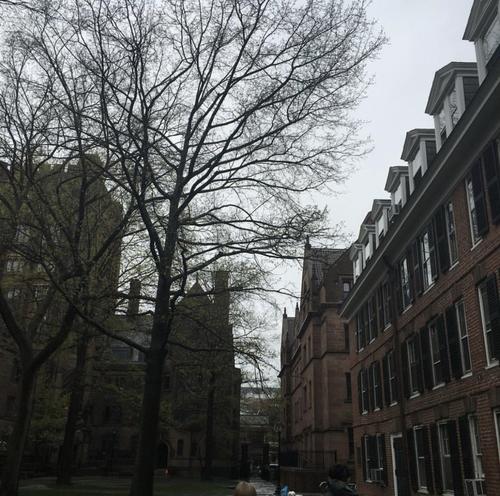 This photo from rainy day 2 is still on my Instagram. I think this was taken on the way to what would become my favorite Starbucks in the world.

5:00 PM: Dinner in Silliman College! Still one of my favorite dining halls, they always have the BEST ice cream flavors.

6:00 PM: This night is entirely lost to me. I have zero memory of what I did, and I couldn’t begin to tell you why. PROBABLY because I was stressed about three AP exams the following week that I accidentally remembered.

10:00 PM: I DO remember turning in early this night, sitting on the futon in my host’s common room, looking out onto Old Campus and dreaming about living here one day soon while writing a final paper for the college English class that I was taking.

10:00 AM: An actual campus tour was being offered, so I figured it’d be a nice morning activity. Except for the fact that I accidentally went on the sciences tour. It goes WAY further up Science Hill than I had planned to go that morning. Oops.

11:00 AM: I attended a Master Class on the trolley problem in Battell Chapel, which was my first time ever hearing about it. I still think about it all the time. I told all of my friends about it for a good two weeks after coming home. I don’t even usually like philosophy.

12:00 PM: My GoShuttle was scheduled to leave and take me back to the airport, but this was also exactly when mountains of New Haven pizza from different local pizzerias were scheduled to arrive on Old Campus. I told them at 11:56 that I had to get to my shuttle and asked if I could skip the line, but I was denied. Crestfallen, I rolled my suitcase to Phelps Gate, pizza-less, but right before we pulled off, a last-minute passenger ran up to the van with two entire pizzas from Sally’s, and we all ate them while riding down the highway. We offered our driver some, but she didn’t partake.

1:00 PM: As fate would have it, all of my pizza shuttle friends were on my same flight to Baltimore, so we went through airport security together, and the first thing I noticed was that Bradley Airport security employees are really friendly and not intimidating at all. I came to appreciate that every time I went home for the holidays.

5:00 PM: I had Chipotle for the SECOND time in my life, at the same Baltimore airport kiosk. Just as amazing as the first time. Soon, it was time for us to split up and go to our respective gates for our final flights. 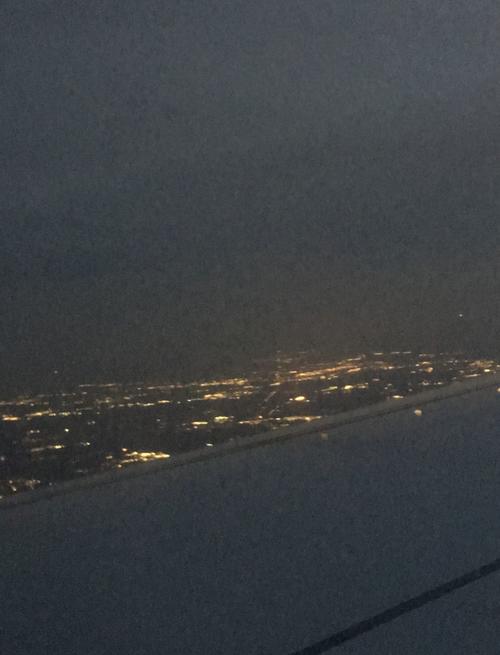 On the way home.

8:00 PM: My mom picked me up from the airport, and we started the two hour drive home where I don’t think I stopped talking for the entire ride. I’d like to say that Bulldog Days is what made me commit to Yale, but truthfully, I accepted my offer of admission about a week after being accepted four months prior to that. It just felt right, and as a senior twenty-two days away from my (virtual) graduation, I still have zero regrets about that decision. I can’t encourage you enough to choose Yale too, and even if you don’t get to see it in person before you start in the fall, you’ll know it’s for you as soon as you step out of the car in front of Phelps Gate.