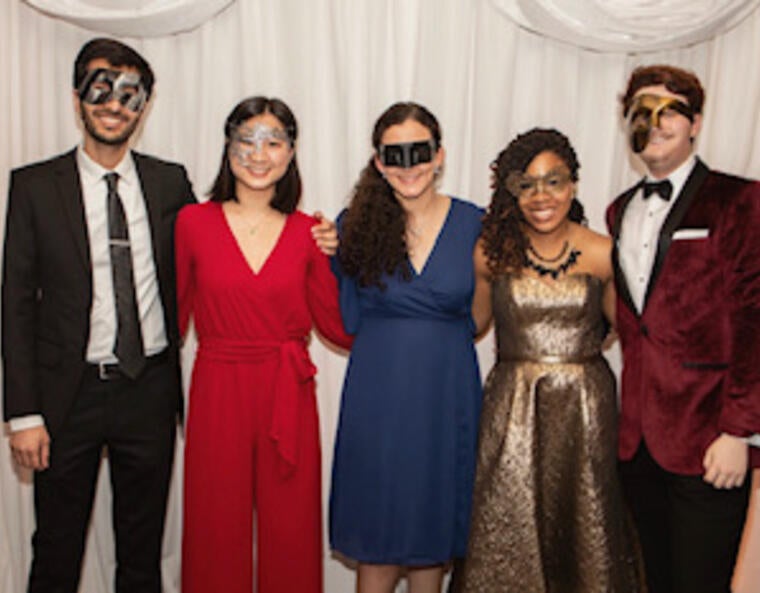 While my senior year, or at least the in-person aspect of it, may have been cut short, there was at least one senior event that I still got to enjoy: Masquerade! Each year, there’s one event for each class year where you have an excuse to get dressed up with your friends. There’s First-Year Formal, Sophomore Semiformal, Junior Formal, and the culmination of all of this fancy-ness: Senior Masquerade. Each class council is responsible for planning these events for their class, and not to toot my own horn, but I was one of the main people responsible for putting my Sophomore Semiformal and Junior Formal together. This year, I didn’t participate in the Masquerade planning, but the people in charge did an amazing job making it an event we’d all remember.

Being such a big event, getting a ticket to Masquerade was an ordeal in and of itself. There were three nights available where every senior had to file into one room in Branford College to show their Yale ID and pay for their ticket. Not surprisingly, the line extended into the courtyard all three nights, and as a Pauli Murray resident, I had to put in some actual effort to walk ten minutes down to Branford. (The horror!) Fortunately, the line moved quickly, and I made it out with this shiny piece of paper: 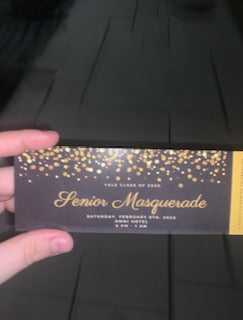 A few days later, I visited a small, unassuming tailor’s shop on a side street downtown behind the courthouse. There, I was greeeted by the shop’s owner, Greg, a lively Greek man. He pulled out a big book of the usual formalwear styles, but when I asked him if he had anything a bit more adventurous, his face lit up, and he pulled out a brand new binder of the season’s more ambitious looks. After taking my measurements, I paid my deposit and was on my way. I ordered a mask on Amazon, and a few days later, it came in, along with a phone call from Greg telling me my tux was ready.

On the night of the event itself, my friends and I took our time getting dressed and went to one central suite to get the whole friend group congregated together. The twelve of us altogether were able to fit into four Uber XLs, which took us to the finest hotel in town: The Omni. We went upstairs to the main ballroom and found a line stretching out of it all the way down the hallway to the other end of the hotel. Security at this thing was TIGHT. One set of people took our tickets and checked Yale IDs to verify that we were, indeed, seniors at Yale, and the next set checked government IDs and put on wristbands for the open bar. And THEN it was time to take group photos in a million different configurations at the photo booth. Not that that I was upset about that: I didn’t pay to be the best-dressed guy at Masquerade to have no one see it after that night. 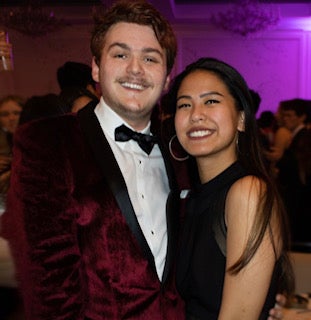 One of my very best friends since Bulldog Days!

Inside the event itself, there were a few tables scattered around the perimeter of the ballroom with light…hors…douv’res? Is that how you spell it? You know what they are. I was also denied a Moscow Mule, because apparently that is “not a popular drink at college dances” and “we don’t have any ginger beer.” Out on the dance floor, the DJ was playing bops from our childhoods AND recent hits. Student photographers circled the floor, capturing candid moments and asking people to pose. According to my friend Helen (pictured above), there was also a “grilled cheese man” carrying around plates of grilled cheeses, but I never saw him. I wish I would have.

After being there for a couple of hours, we made our way downstairs and called another Uber to take us home. A lot of my friends were hungry and talked about ordering pizzas when we got home, but I was absolutely exhausted. Back at Pauli Murray, they all went one way to go eat, and I went back to my suite to immediately get into bed. At least, I thought I would. What actually ended up happening was that I undressed, put on my pajamas, and THEN went to my friends’ suite where the pizza had just arrived. I had three slices. Classic.