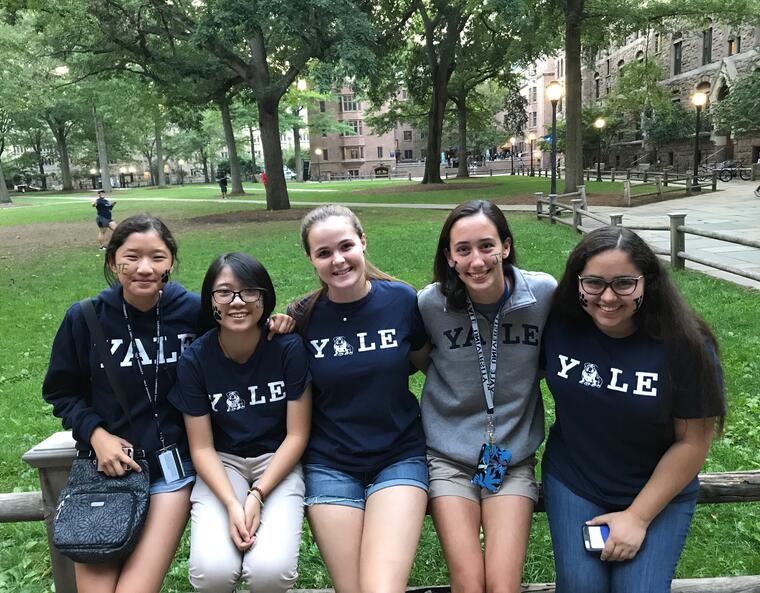 In some ways, there really is nothing like experiencing Yale for the first time. You come onto campus in the summer when it’s most beautiful. You’re welcomed into a warm residential college community. You meet new people. You try new classes. You get to take part in countless traditions that make your first year one of the most memorable. Below is a photo compilation of my favorite first year experiences at Yale.

In addition to eating with your suite or your friends every night, Yale has two first-year specific experiences. The first is a welcoming meal in your residential college. The second is a class-wide holiday meal complete with a parade of food and ice sculptures. 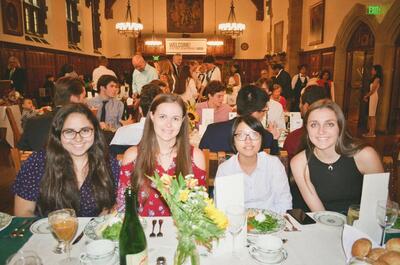 My FROCO group and I smile at our first year JE welcoming dinner! 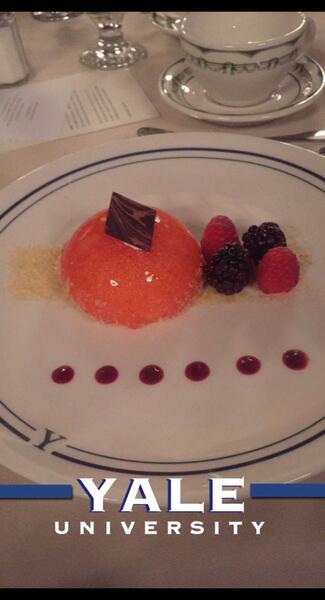 By far, the best dessert I’ve ever had at Yale that was served at JE’s welcome dinner. A raspberry cheesecake *chef’s kiss* 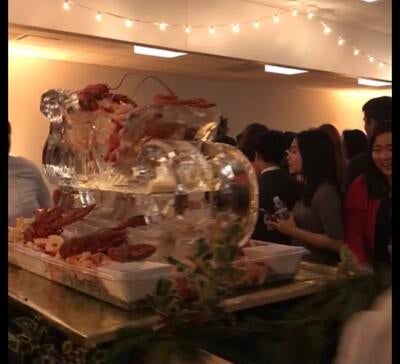 An ice sculpture topped with lobsters served at the holiday dinner. This was one of the many parts of the Holiday Dinner parade!

At Yale, there’s such a thing as Halloweek, where there are so many campus parties and costume contests that you can either re-wear the same one or have almost as many as you would like. While this tradition isn’t just in your first year, I wanted to highlight it because my friends and I went all out our first year. Our experience with the residential college costume contests and dressing up in costume for the annual 10/31 Yale Symphony Orchestra Halloween show set the tone for the rest of my Yale Halloweens. 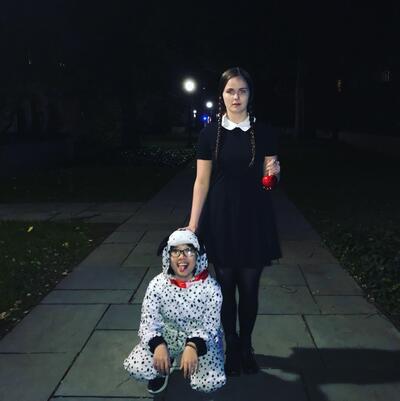 My suitemate, Chau, and I pose outside of JE after the Halloween dinner. The candied apple is for creepy effect! 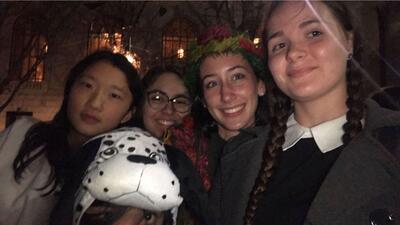 My suite and I as we walk to the YSO show in our costumes!

Again, another tradition that doesn’t have to be limited to your first year, but a tradition you definitely must take part in. My first year, Yale played Harvard in the Yale Bowl and won! We all rushed the field celebrated the football team’s win. It’s one of my most memorable first year moments! 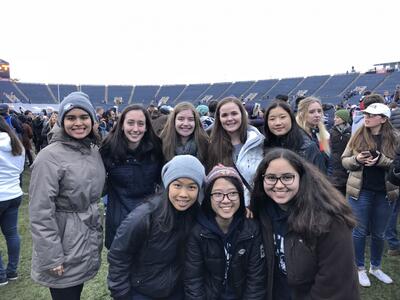 My friends and I on the Yale Bowl field our first year after Yale beat Harvard!!! (classic Yale) 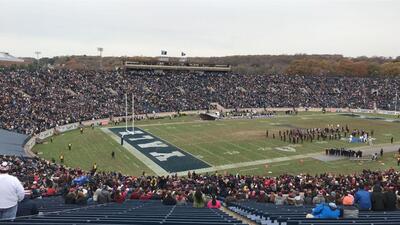 The Yale side of the Yale Bowl is packed with students and alum!

This is properly a first-year tradition. When the first large snow falls on Old Campus, all the first years take part in a massive snowball fight, where there’s really no order to the snowballs being thrown. Some residential colleges, like Jonathan Edwards, my home college, also has a first-year tradition to string up holiday lights on the outside of our Old Campus dorm. JE’s tradition is to spell JE LUX, a play on words from our motto JE SUX (it’s a cheeky self-deprecation, I promise). 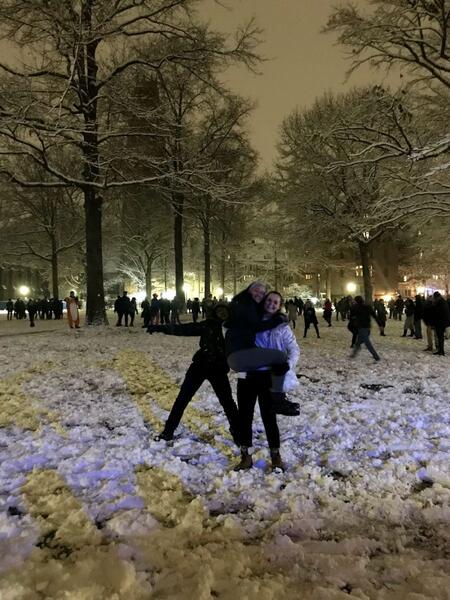 I hold my friend Nickolina as we stand in front of all the fellow first years still going ham with the snowballs.

Yale abounds with formals and excuses to dress up with your classmates if you want to take them. In your first year, there are both residential college specific dances and class-specific dances. 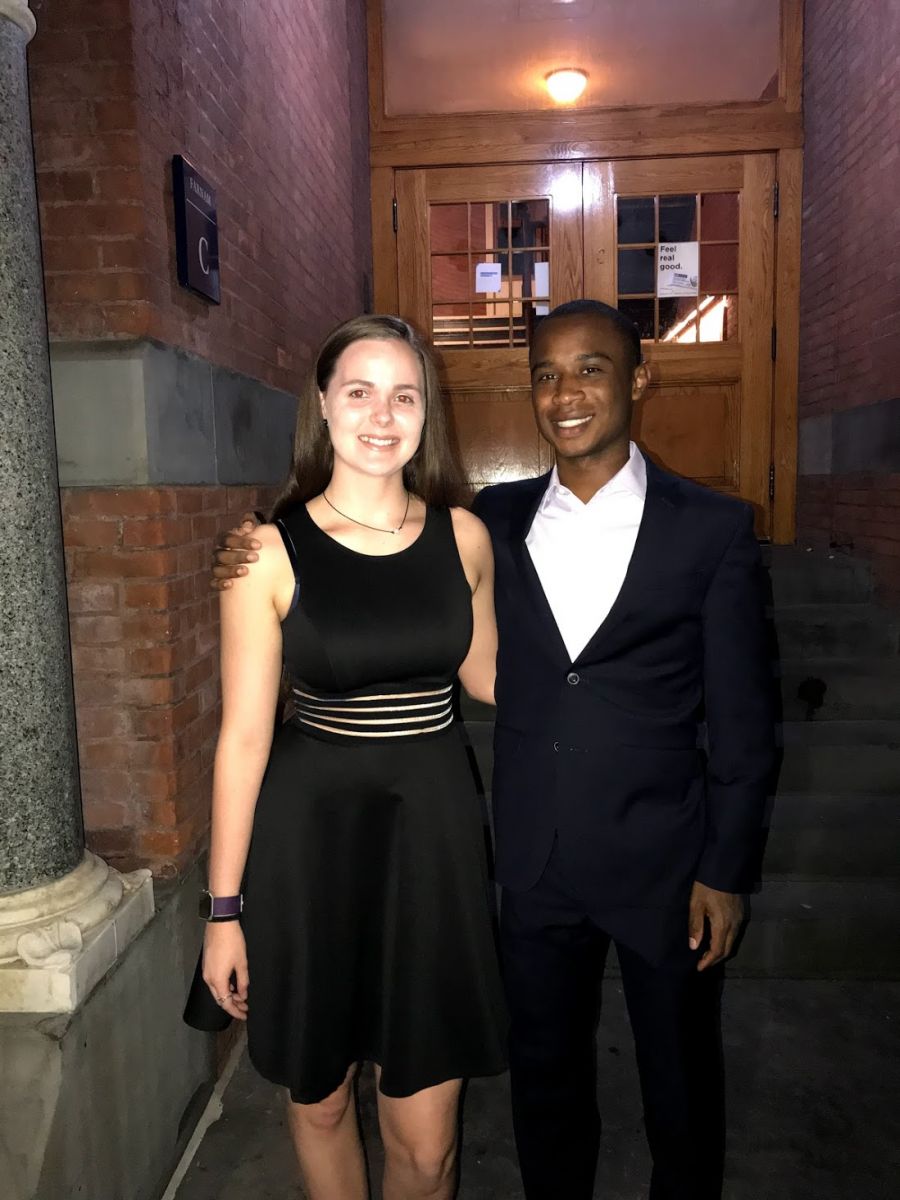 For JE’s dance, my friends set me up with a fellow JE first year, Miles. 3 years later, and Miles and I are still friends! 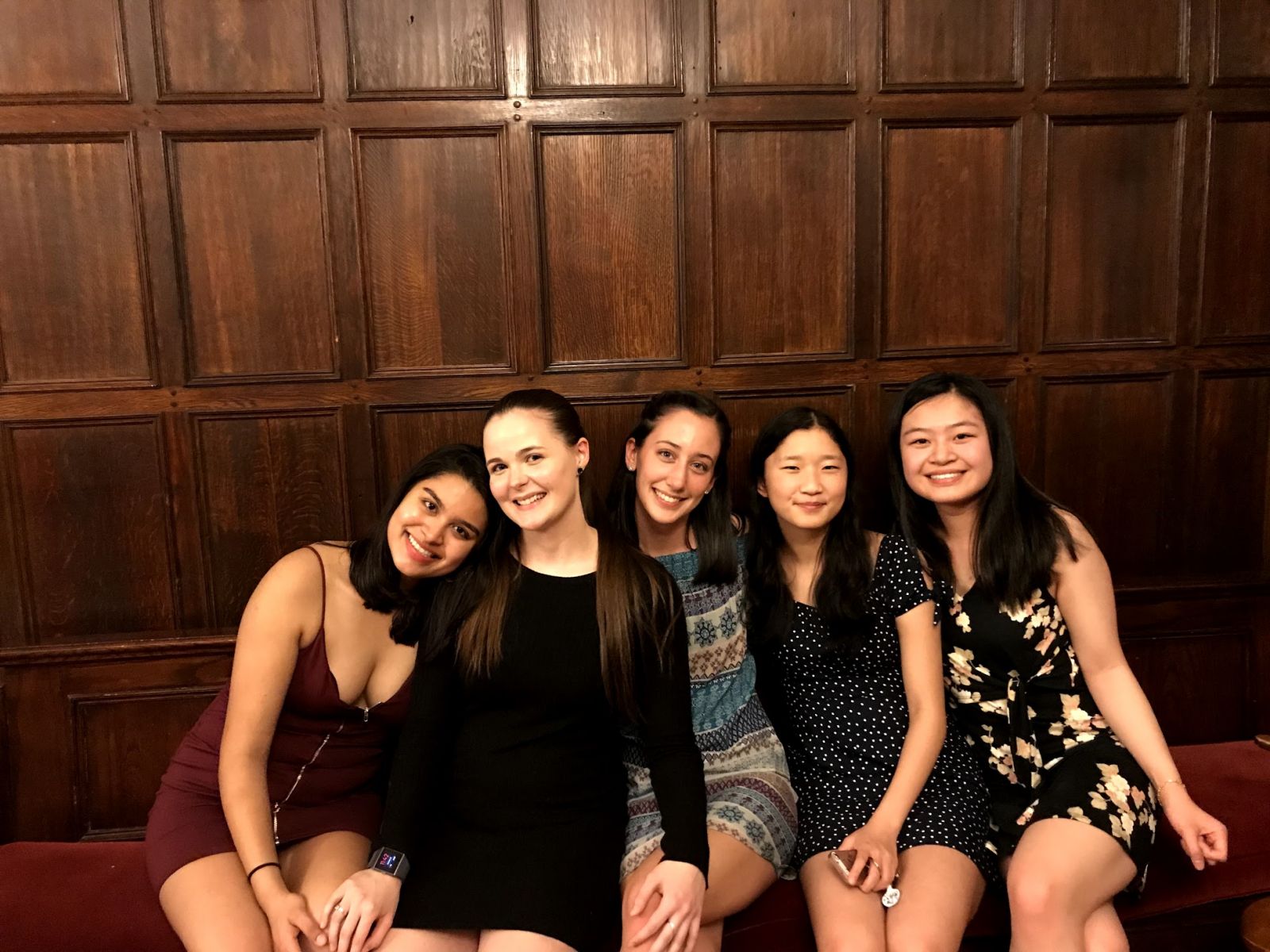 Another day, another formal with my fellow JE first years!

Old Campus is transformed into a battle royale where 14 different groups of first years compete to see which residential college will score the most points. There’s vaseline watermelon runs, inflatable jousting, tug-of-war, rap battles, and more. 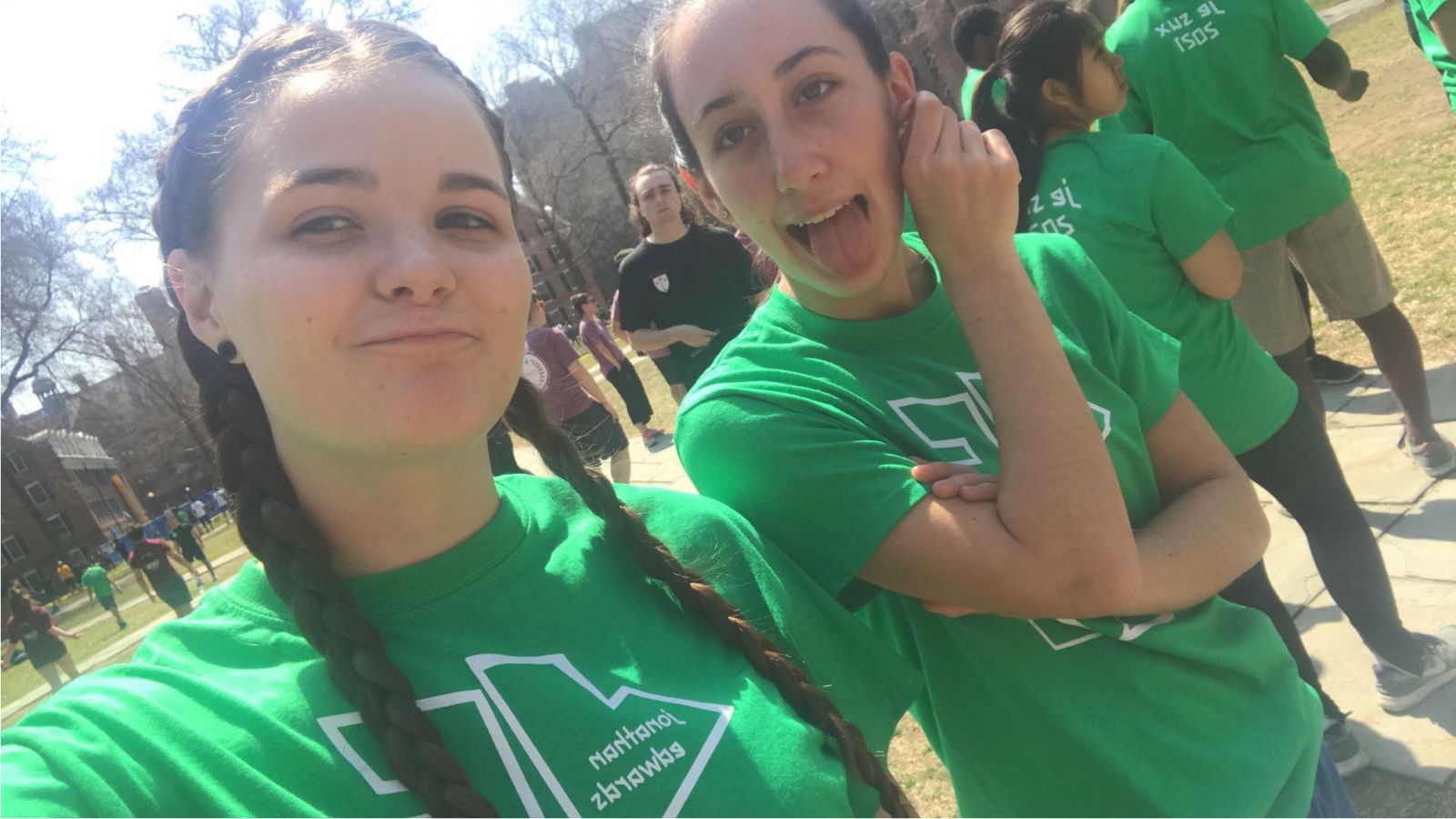 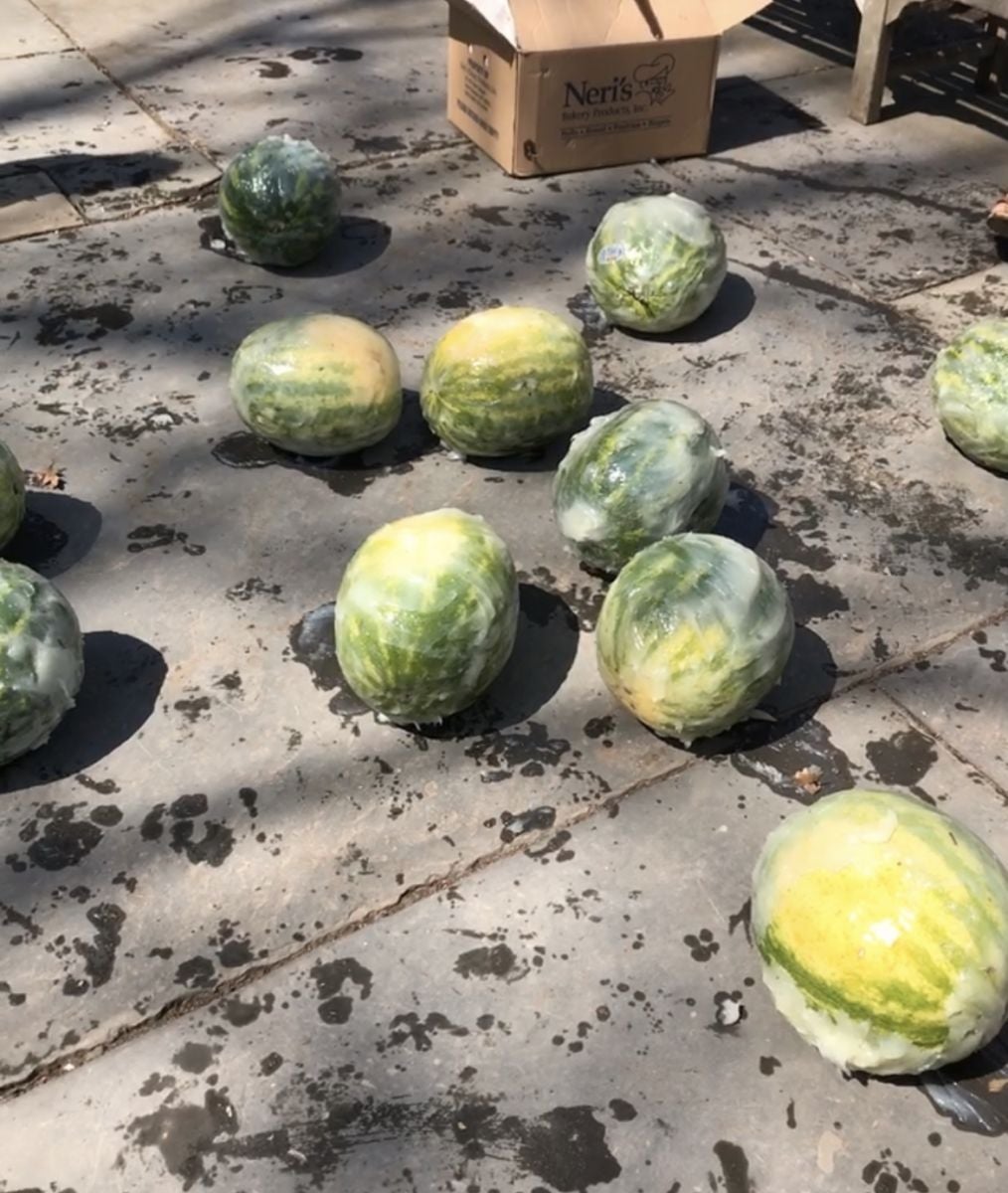 Not technically a first-year tradition, Spring Fling is traditionally hosted on Old Campus, where a stage is erected, and Yale-affiliated and outside acts perform for the entire student body. In my time at Yale, I’ve heard A$AP Ferg, Playboi Carti, Cupcakke, and Dagny! 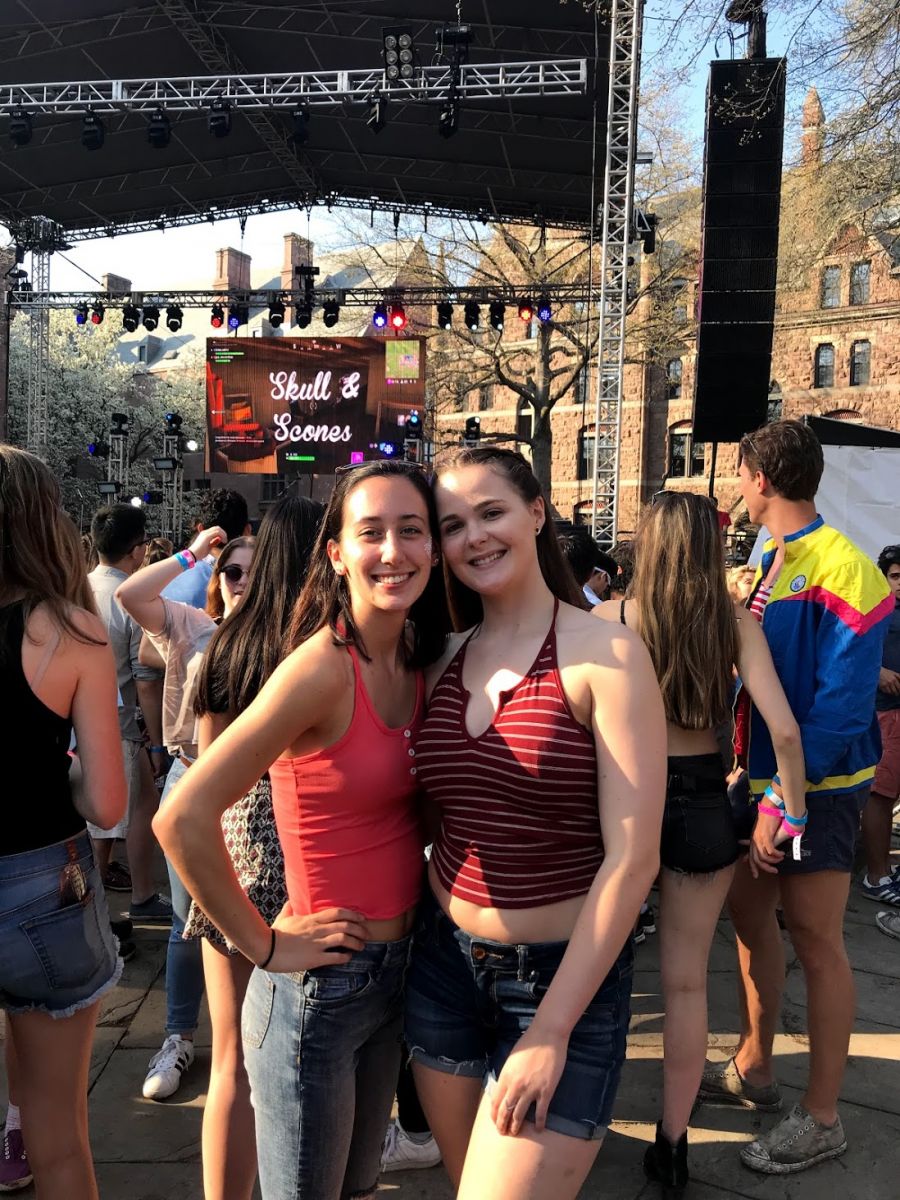 Nickolina and I pose among the crowd in front of the Spring Fling stage on Old Campus.

In addition to all these traditions, there are so many more that you’ll make with your friends or that will be specific to your residential college. For example, JE has an annual post-Easter water balloon fight where first-years storm JE from Old Campus. There’s also Camp Yale, your first week where orientation feels a lot more like constant tradition. Each year at Yale is filled with different memories and different traditions. But my first year at Yale will always take the cake. 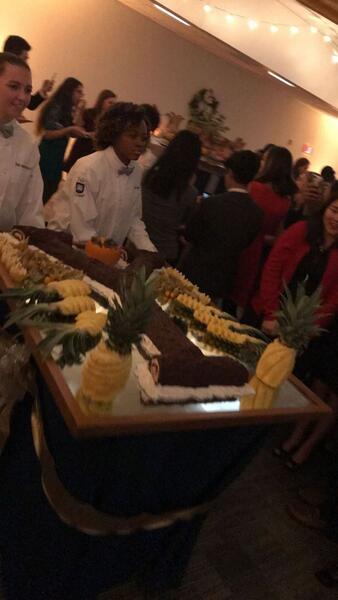