How Affordable, Really, is Yale?: A Full-Aid Student’s Perspective 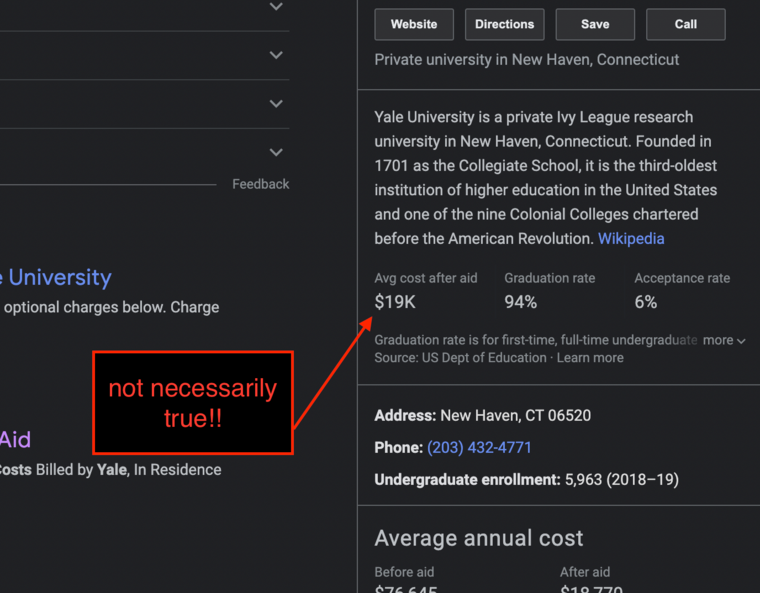 At some point during my college application experience, I Googled the costs-of-attendance for the colleges I was considering. My mouth dropped when I saw that Yale costs over seventy-six thousand dollars a year (in contrast, my local state school’s price was about a third of Yale’s). I remember thinking to myself that there was no way I’d be able to go even if I got in. I’d heard that Yale gave generous financial aid, but I couldn’t imagine that it would be enough to make such an expensive place affordable to me. Flash-forward to the moment I got my first financial aid package alongside my acceptance into Yale:  Yale had gifted me enough funding to cover the entire cost of tuition, room and board, hospitalization insurance, and more. For families who make less than $65,000 a year, Yale covers almost the entire cost of attendance. For every family, Yale fully meets demonstrated need. My quick Google Search about Yale’s cost hadn’t quite captured Yale’s cost for me. 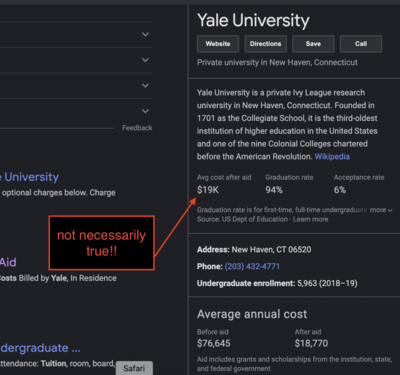 A quick Google Search might not represent Yale’s cost for you - it definitely didn’t for me!

Every year, my financial aid from Yale has been generous, but that’s not really what this post is about. I want to tell you about what a “full-ride” at Yale looks like on the day-to-day. I want to reassure you that, after the initial sticker shock of Yale wears off, the university works to make itself accessible and affordable for you. What follows is an overview of what exactly that affordability looks like. I want to highlight a few things that make Yale more accessible than you might think:

1. Just Getting Started at Yale

One of Yale’s greatest strengths when it comes to affordability is that its financial aid package is split into two categories:  billed and unbilled costs. What this means is that Yale accounts for costs like room, board, and tuition; and it considers the cost of other things like books, living expenses, hospitalization insurance, and travel when calculating the how much aid it offers  you. Those other things are expenses you don’t pay directly to the university, hence the label “unbilled”.

This is a snapshot of the estimated cost of attendance from my first financial aid package. Note how it splits costs into direct and indirect (aka billed and unbilled).

When I saw the billed vs. unbilled categories on my award letter, I was initially confused about Yale’s price for me, until I realized what the categories meant: Yale had factored in the costs of things that I hadn’t even begun thinking about. They’d allotted me money for books and provided a supplementary startup grant my first year to cover other single-purchase items. Because this money isn’t directly billed to Yale, I received a refund from Yale to pay for these secondary expenses. It meant that I didn’t have to worry about spending all my savings or taking out a personal loan to get to Yale or cover these costs.

(Side note:  There are also ways to lower the cost of your course materials, such that you’re not buying everything new from the campus bookstore. Yale’s library system is so vast that often, you can just borrow your course books from the university library, and if not, you can buy them used from university resale pages or websites like Amazon or thriftbooks. Sometimes, professors might even have a copy that they can lend you if you just ask!) 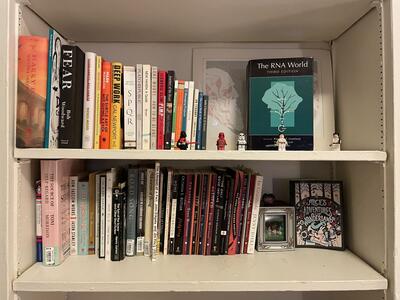 The bottom shelf contains books I purchased for this semester’s English classes. I used my refund from Yale to fund these purchases!

2. Getting to and from Yale

I was also shocked when I discovered that my financial aid bill accounted for travel to and from my hometown in Texas. Because Yale knows that many of their students are not from Connecticut, the Financial Aid Office takes that into consideration and alotts money for travel home during breaks. As a full-aid student, I really appreciated this because it made me worry less about whether or not I would be able to afford to go home.

Yale also provides winter clothing grants to students from warmer climates. I was able to take advantage of this grant my first year and buy a warm pair of winter boots and some sweaters to help me adjust to the much colder New Haven weather. 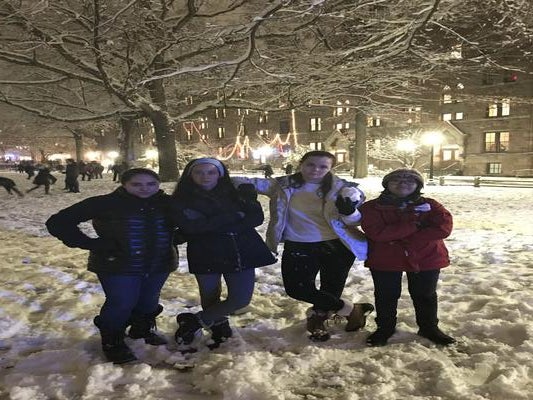 My suitemates and I at the traditional first-year snowball fight. I’m making use of warm winter clothes partially funded by the winter clothing grant!

Yale also has created funding available specifically for students on financial aid to participate in summer programs that might otherwise be inaccessible. This past summer, I made use of Yale’s Summer Experience Award (SEA) to work with a local New Haven nonprofit. The SEA funded my work so even unpaid and low-paid internships (either domestic or international) were possibilities for me.

Yale also has the International Study Award (ISA), which funds international study abroad programs based on the amount of financial aid that the student receives (so if someone is on a 100% scholarship, then the ISA will fund 100% of the study abroad budget, which includes both direct and indirect costs). I used the ISA the summer following my sophomore year to spend two months in Europe. The Award didn’t just cover tuition for the study abroad program, but also helped me pay for my flights and my food while I studied. Because of the ISA, I was able to study abroad and then use some of my savings to travel to other countries before I flew back to America. 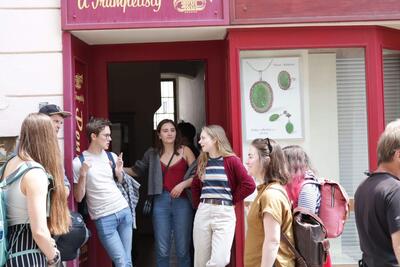 My study abroad group and I stand outside of our hotel in Český Krumlov, Czechia.

I’ve outlined above how Yale has many different programs to help increase accessibility and affordability for full-aid students, such that there shouldn’t be any large and unexpected costs that students must pay to attend Yale. With that said, Yale’s student jobs also provide a means of covering the student share portion of the financial aid package and is a way to have some extra financial cushion. These jobs also enable full-aid students to support themselves if their guardians aren’t in a financial position to do so.

I’ve held jobs at Yale since my first semester here, and have met so many of Yale’s faculty and other students in the process. Yale has its own minimum wage, so all of the jobs I’ve held here have paid almost double the federal minimum wage that I was paid at high school jobs. Working while at Yale has definitely limited the amount of time that I’m able to devote to extracurriculars, but I have found jobs that feel meaningful to me (like as an admission office blogger, for example). 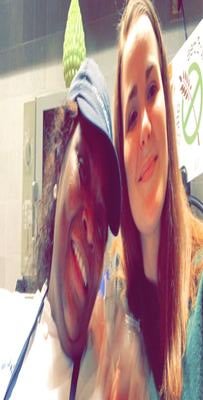 A JE dining hall worker, Theresa, and I smile together during one of my shifts!

All of this is to say that, from a full-aid student’s perspective, Yale’s affordability is pretty affordable. Yale doesn’t just cover the costs of tuition and room and board, but they have programs that make the Yale environment and community accessible to everyone. Yale wants these resources to be accessible to you, and making use of these and asking about others that I might not even know about is a good way to start.