From Texas to Yale: How I Found my Voice on Campus 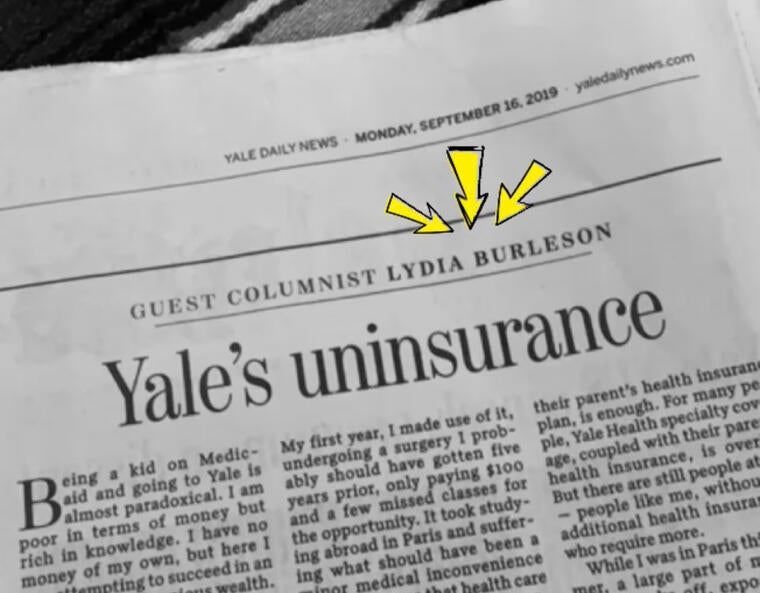 For almost the entirety of my first semester at Yale, I had trouble speaking openly about my socioeconomic background. As a first-generation low-income student from rural Texas, I initially felt out of my element at Yale. I’d convinced myself that Yale had no space for me–a poor person unfamiliar with how to navigate being successful in a college seemingly full of already-successful people.

I’ve talked frequently in my previous posts about how that overwhelming imposter syndrome has become more manageable; I’ve talked about how I’ve come to love and appreciate the opportunities that Yale has afforded me. But before I got to that point, I first had to find my voice. I had to overcome the gap between my resource-desolate background and my new resource-rich environment. Yale wanted me to succeed. I just had to figure out how to do so. Talking with friends and then writing for student publications gave me that entrance into the Yale community conversation, and I soon gained the confidence to feel like I belonged there. I’m sharing my experience now with you guys because I hope that–if you’re in a similar situation– you, too, can feel like Yale is your home. You, too, can find your voice.

During the summer between my first and second year, I made myself a promise:  I would talk about my poverty to my friends. I wouldn’t hide it. I wouldn’t apologize for it. And I would hope that they would accept me. They did. With more open communication between me and my suitemates, between me and my residential college dean and head of college, I slowly began to share the struggles that I’d been braving alone. I was guided toward resources to help fund warm winter clothing. I was encouraged to reach out to the residential writing and math tutors. I was told about professor and T.A. office hours, about peer tutoring sessions, and about forming study groups with my classmates. I also was invited to social events and encouraged to join student organizations that I’d never known existed. I learned so much from those around me just by asking. And along the way, I was always encouraged to ask more.

From talking with my friends, with faculty, and with my residential college supporters, I gained the confidence to start seeking out and taking advantage of Yale’s opportunities. Though I’d never been on an airplane before flying to visit Yale, I soon found myself in Europe the summer between my sophomore and junior year:  I’d taken advantage of Yale’s study abroad funding for full-aid students, and I saw a world I never could’ve imagined. If it hadn’t been for opening up to people and asking for help, I never would’ve taken advantage of that trip and the copious other experiences I’ve had since. I had been so afraid to ask but had never imagined how asking could open up so many resources for me.

Don’t get me wrong, getting into Yale did not mean I had magically escaped my poverty. After I broke a tooth while traveling in Paris and had no dental insurance to fix it, I found a hole in Yale’s support for me. And so I took the next step in my development as a Yale student:  I wrote about it and explained how Yale could change to better serve students like me. With my first opinion piece for the Yale Daily News, I didn’t just raise awareness for my own pain. I proved to myself that Yale wasn’t a monolith and that I could advocate for the university to be better. So I did. And I was heard.

A screenshot of my first YDN article in print.

After that first opinion piece, I finally felt like I’d found my place at Yale. I was still disadvantaged, but I no longer felt helpless. By talking with my friends and the support staff around me, I found my confidence and learned how to take advantage of Yale’s resources. By writing for student publications, I found myself actively taking part in making Yale better for future first-generation low-income students. I’d found my voice. And now I encourage you to do the same. Know that adjusting to college will be hard and that there will be a learning curve, but also know that the people at Yale want you to succeed. Yale has a space for you: all you have to do is find it.