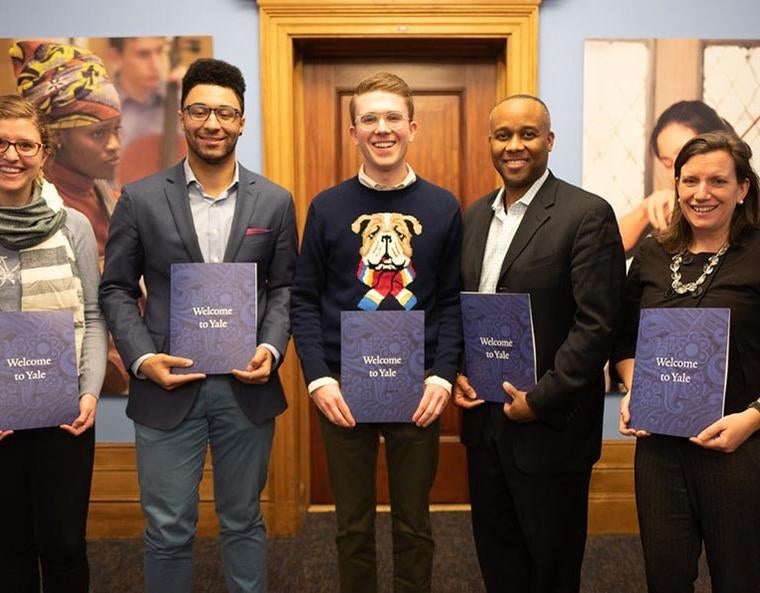 Congratulations! YAY!! Obviously, you were admitted a while ago, but I hope you are still feeling very, very good. Whether you committed immediately or are planning on taking several months to decide where you want to go to college, you’re probably wondering what the next steps are. As an admitted senior, I was very eager to consume Yale content and spent hours fantasizing through vague internet searches like “Yale dorm pictures” and “can anyone join Yale triathlon.” (Answer: yes, but I almost blacked out the first swim practice and never went back. Perseverance!) So, without further ado, here are some things you can do to after receiving your good news.

1. Actually take the time to be happy for yourself.

Hey, you got into college! Celebrate by eating a cupcake or something! It’s important to recognize the moments that bring you joy and store them in your brain. Obviously, you are a great, smart, kind, deserving person whether or not you get into college and you should celebrate yourself every day. (Unless you are evil, but somehow I don’t imagine that being the demographic of people who read these blog posts). After I got into Yale, I proceeded to not get into almost every other school I applied to. I’m not saying this to harsh your mellow, just to say you should totally celebrate something you’re proud of, but you shouldn’t make a value judgement on yourself based on whether or not you got into a certain school. Did that make sense? I hope so!! Eat the cupcake!!!

A fun question to ask yourself is: if I could do literally any activity in college, what would it be? You may say, “Excuse me, this is a dumb question. I have done Mock Trial for the past 900 years and I will continue to do it in college.” NO! Or, yes–do whatever you want. But a way to make this game more fun is to make a rule where you pretend you cannot do any activity in college that you have already done before. For example, did you know Yale has several obscure sports that ANYONE can join? Some examples include rock climbing and polo, which as far as I can tell is like golf but on a horse. There’s also a “fly fishing club” which I’ve heard is a front for a secret society, so look into that, if you want.

This is something I did a lot in preparation for the possibility of having a dorm room. I spent no money but did take several wistful screenshots. It’s so fun to look at various bedspread patterns for several hours and fantasize about completely changing your personality to fit them. Just remember you are not allowed to paint the walls or have an open flame, so get that fancy sandalwood-scented candle out of your cart, you arsonist.

Now that you for sure know that you’ve been admitted to at least one of the schools you wanted to go to, you presumably have a little more time and a little less stress on your hands. This means you can open up your brain to a few new possibilities in terms of your future. Like, for example, have you considered putting off college for a year to work and/or do some non-academic exploration? I did this and will definitely write a longer post about it come commitment season, and I can’t recommend a gap year enough. Now is a really good time to start considering it! Yale 2023 is lucky to have you, but Yale 2024 is also a great option. Plus, you get two t-shirts.

If you think of the college process as a long uphill hike, you might still have some trail to go. But winter break is a really nice vista point to stop at and see how far you’ve come. I hope you all have wonderful starts to your 2019, which reminds me…

5. REGISTER FOR BULLDOG DAYS! See you in April!