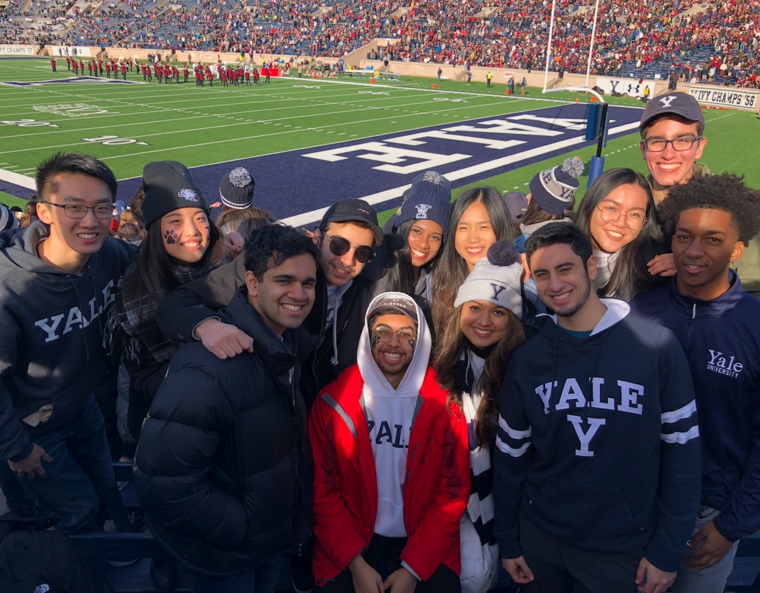 Every year, on the weekend before Thanksgiving, a certain sense of anticipation saturates the air of Yale campus. Not just because of the impending break—though I should note that Yale is really generous on this front, giving us the whole week off when many other schools only get three days—but because of what comes before: the annual Yale-Harvard football game. In a normal year, the Game marks a release from all the stress of midterms and extracurriculars, a final rush of excitement before we get to catch our breath for a few days. This year, obviously, it’s not happening. But in anticipation for *fingers crossed* the Game 2021, I’d like to reminisce on years’ past.

In my first year, the Game took place at Harvard. Immediately after our last class on Friday, my friends and I rushed over to the shuttles (arranged for us by Yale) that would take us to Boston. While a lot of Yalies stay in Harvard housing, organized by our residential colleges, I stayed with my suitemate Niyati in her high school friend Kathy’s dorm. Kathy’s super funny and welcoming, with a warm, bellowing laugh. We had a lot of fun comparing our two colleges, and I’m so glad that the Game (and Niyati) introduced me to a new friend from the other school. 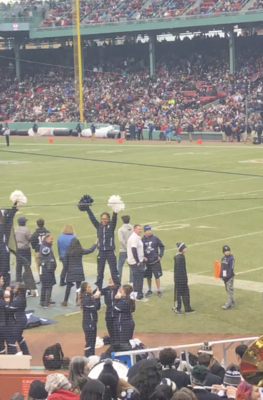 My suitemate, Gabby, is on the cheer team. Here she is at the top of the pyramid!

Unfortunately, we lost in 2018, and I hate losing. Nevertheless, I had an amazing time meeting new friends, deepening friendships with fellow Yalies, basking in the school spirit, and exploring a new environment.

Some great memories came out of that weekend, but it’s a known fact that the Game is more fun when it’s in New Haven. Enter: 2019.

Yale knows how to throw a good party. The night of the game itself, we reunited with Kathy and her friends, introducing them to Friday night at Yale. The next day, when Kathy’s group met up with the rest of their Harvard friends, my suitemates and I, with a larger group from our residential college JE, headed over to the Yale Bowl. 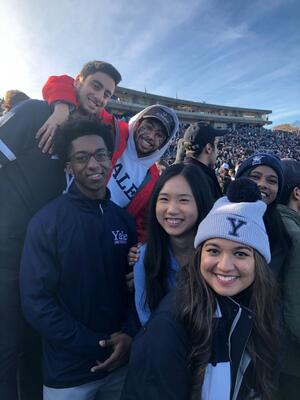 Watching the game with JE friends!

It was pretty straightforward until half-time. Protestors—members of Divest Harvard and the Yale Environmental Justice Coalition—stormed the field demanding that our schools divest from fossil fuels. More and more students joined them, delaying the start of the second half and sending a powerful, unified message about the importance of decisive action against climate change. 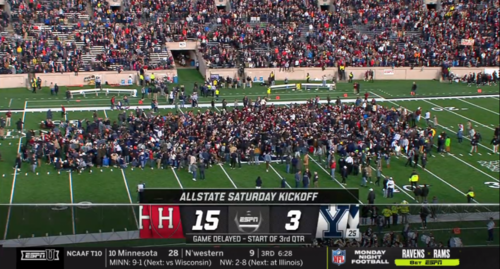 The climate change activists had such a large impact that they made national news.

When football restarted, it looked like Yale was going to lose, again. By the fourth quarter, we were down 17 points.

This is where I have to expose myself: my friends and I jumped ship. Not wanting to relive the pain of last year, we decided to leave the stadium to forgo the end of the game. We trudged to the buses that would take us back to campus, the crunching of leaves beneath our feet loud with the weight of our sadness.

Not quite ready to give up hope, some continued to follow the events on their phone. Yale made a field goal, then got a touchdown, narrowing Harvard’s lead to 7 points. What if? we started to wonder. We made it to the bus line. As we neared the front, we got a call.

“They just recovered an onside kick!” said my friend Vishnu, on the phone with his friend who hadn’t left the stadium. That meant that Yale had the ball again, with the potential to tie the game in the final minute.

My friends and I looked at each other, our emotions a mixture of elation and disappointment. Yale had hope! But… because we had given up too early, we were about to miss a potentially historic comeback. All of a sudden, we came to a common understanding.

We left the line and ran, ran, ran. Never have I sprinted so desperately in my life. When we were halfway back, we heard cheers erupt from the stadium, a sign that Yale had tied the game. Time for overtime. We ran even faster, sprinting past the gates and confusing a few security guards. We made it  back into the Yale Bowl just in time for play to restart.

The rest is history. After the most intense half-hour roller coaster of my life, sun setting in the background, Yale prevailed in double overtime. The moment we won was unforgettable, a deafening burst of screaming and cheering. At first, a few people in the front rows ran onto the field. More and more people joined them, until, for the second time that day, a huge crowd of Yalies was rushing down, this time in a massive tsunami of exuberance. 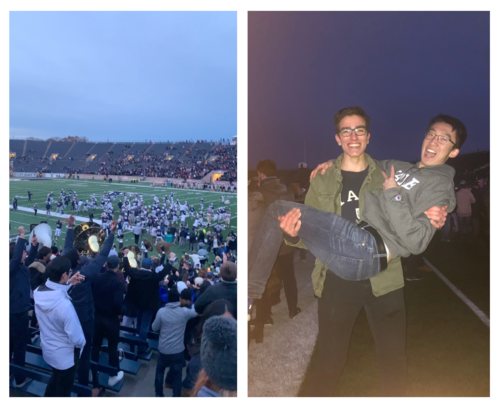 Scenes from Yale’s victory: people starting to go crazy when we won, and my friends Max and Erick celebrating after we stormed the field!

A year later, we still talk about that afternoon, the indescribable feeling as we stood in the center of the Yale Bowl, its tall wall of blue seats sealing us in a bubble of elation in the dusk. I felt an intense camaraderie with everyone there—my JE friends and our crazy sprint back, the larger sea of Yalies surrounding us, everyone going absolute wild.

Looking back on these two years, I can’t help but notice that while the Game is ostensibly about rivalries and competition, both years, it actually brought me closer to a lot of people: new friends at Harvard, familiar faces at Yale. The Game is ultimately about unity—and, as the 2019 joint-school halftime protest showed, that unity can transcend football to help spark necessary change. COVID may have put a pause on one of my favorite traditions, but I’m mourning less the loss of the Game itself and more the distance that the pandemic has injected into all of our connections. Hopefully, hopefully, the Game 2021 will happen. And when we can all be together again, cheering on our team in that big, loud, messy crowd… win or lose, miraculous comeback or straightforward affair, I just know it will be one for the books.