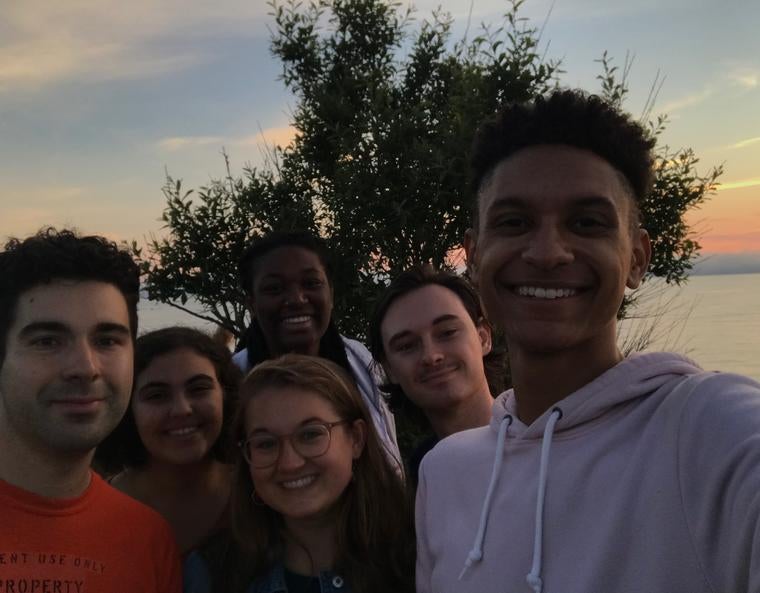 “Do you mean… Hot Girl Summer?”

Near the end of June, after receiving summer fellowship funding from the Michael Manzella Foundation, I left Colorado for Falmouth, Massachusetts. I embarked on my Yale Summer Plans™ that had gradually come into fruition over the course of March and April. For a little over five weeks, I was an intern at the Cape Cod Theatre Project, working with my first-year seminar professor, as well as my friends and classmates.

After missing a bus, almost falling down an escalator, and making pitiful eye contact with everyone and anyone who saw me wobbling around Boston Logan airport in sweaty desperation, I completed the first leg of my journey. Yes, I wore a hoodie on the plane — I was cold, but upon arriving, and melting into a puddle instantaneously amidst the humidity, I came to the conclusion that I had played myself. But only in that regard! The rest of my experience was going to be as great as planned. I was sure of it. After all, as one of my friends and fellow interns noted, “guys, we are on the literal Cod right now!” Cape Cod! Cape Cod, as in, one of the places you daydream-google when you’re a stressed and overcommitted high school junior looking for ways not to work on your chemistry lab report due at midnight, saying to yourself “maybe one day I’ll be able to vacation there and flex on everyone with my friends — alas, if only!” 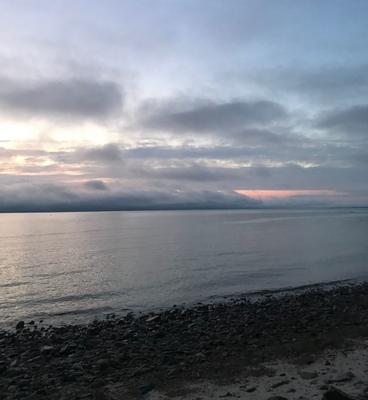 My first view from one of the overwhelming number of Cape Cod beaches!

However, as rapper (and fellow college student!) Megan Thee Stallion once asked: “Handle me? Who gon’ handle me?” So. I was determined to thrive. And I did! Over the course of each week, after around 18 hours of rehearsal, playwrights wrote and rewrote rough drafts of their new plays, culminating in three nights of staged readings of their plays — and four new plays were developed and performed. That July existed at the nexus of beach time, scholarship, chaotic camaraderie, and contagious happiness. Take the energy of when you’re driving through the city at night — the buildings like luminous monuments to an immortal and invincible youth, the car speakers pulsing, your friends hollering while the windows are down — and you have the bejeweled essence of what my time in Falmouth was like. 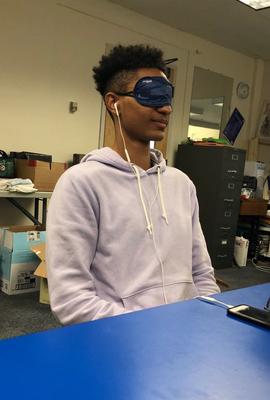 A quick nap during one of my breaks - it really do be like that sometimes. 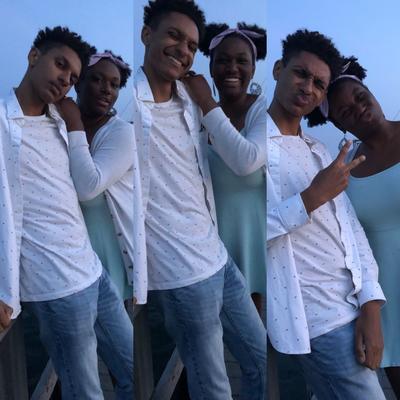 Now, I know Nina Simone had that song called “Young, Gifted & Black,” but how about “Young, Goofy & Black” too?

“Listen, all I’m saying is that Billy Ray Cyrus got on this track, and he did what he had to do! He snapped. He went off.”

As the other interns and I began our daily drive to Falmouth Academy, where the Theatre Project operated, we would start with the “Old Town Road” challenge — we had resolved to listen to it every day for the month of July. Then, rife with yeehaw energy, we’d divide into pairs as we worked throughout the day in one of three roles: administrative, creative, and rehearsal. Working in the office, we learned about setting up the box office and front of house, did a bit of program folding (it’s kind of peaceful once you get into it!) but also had the opportunity to drive actors and directors around Falmouth and Woods Hole — which allowed for some genuine conversation, when I wasn’t too starstruck to give more than monosyllabic answers.
On the creative team, we worked on the end of season intern show, spent some time on our own personal projects, and got chances to take master classes and write with playwrights — including a Pulitzer finalist! Coming into the Project, I knew that I wanted to write a play that combined family narratives with music and healing — and in addition to the first few scenes, I also got all the tools (literary, self-care, practical, and otherwise) to do so. I felt like as much (and maybe, even more? I took so many notes!) was being invested into my own goals as I was investing as an intern. It wasn’t the first time in my Yale experience when I took a moment to blink, look around myself, and think about the mind-boggling fact that I was in the room I was in. 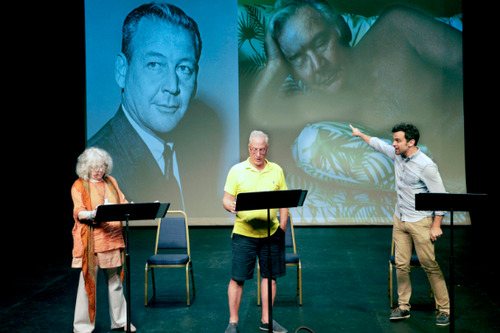 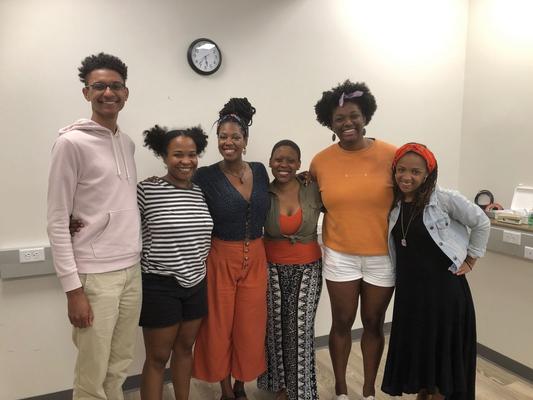 Charlotte and I with the cast of Eboni Booth’s “Nonfiction” during the second week of new play development! 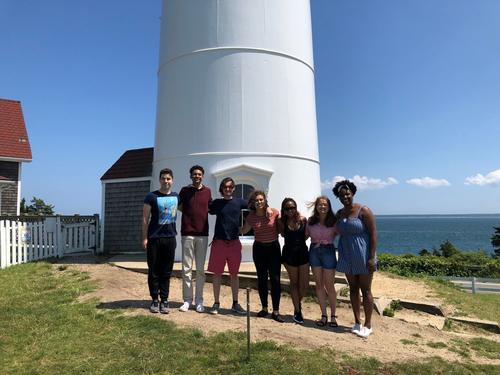 The 2019 Intern Company along with director Candis Jones! She taught a master class on maintaining self-care in both theater and everyday life.

Lastly, and perhaps the most impactful, was being in rehearsal with the casts. We got exposure to the artists themselves, but also were able to see how the performances evolved from day to day. There are many artistic spaces where it’s entirely possible to be seen but not heard, and feel burdensome or infringing by virtue of just your being there — but I was struck by how kind and welcoming the actors, playwrights, and directors were. The second week, the director would begin rehearsal by asking everyone (interns included! a happy and affirming surprise?) to say one thing we were grateful for. I was grateful just to be in their presence. Sitting in a room with an all-black cast, especially one immersed in steady laughter, earnest vulnerability, and electric talent, made me feel as if there was a future for me in storytelling — that there could be (and was) space for the histories, legacies, and thoughts that I’m trying to craft into art. 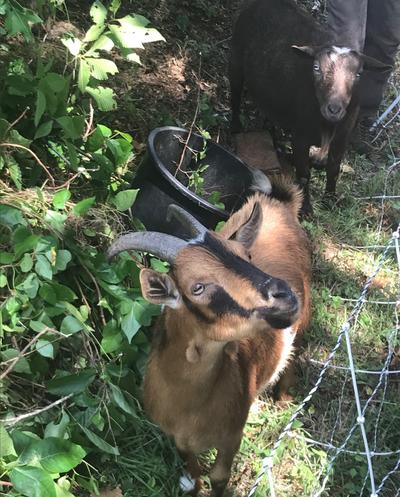 On one of the last days of the project’s season, Falmouth Academy brought in goats! Officially, they were there to eat the poison ivy that had been growing around campus, but they were also an amusing surprise to stumble upon during our breaks.

Each week was its own insular, episodic adventure — a real life play, even, with its own small arc and sets of characters stretching from Monday to Sunday, climaxing in three days of presentations, with the valley of saying each goodbye amended by a boisterous welcome the next day. Personally, creatively, and professionally, we grew into and up from our routines, excavating what nuggets of advice and wisdom we could, consolidating yet expanding into a close-knit family.

“You love yourself first!”

Our time was spent aggressively reminding each other to practice our affirmations, and to take care of ourselves and each other. On massive pasta dinners with perhaps a bit too much garlic salt. On late nights listening to Summer Walker and Destiny’s Child. Cleaning my Mickey Mouse vans (everyone loved them! they were a huge hit! I think I have to make it part of my brand now) and running in the rain and hot yoga and wiggling our toes in the sand and learning how to bake tofu — a fractal collage of chest-swelling joy and purposeful work and promising inklings of the wide, wide future that lay ahead of us.