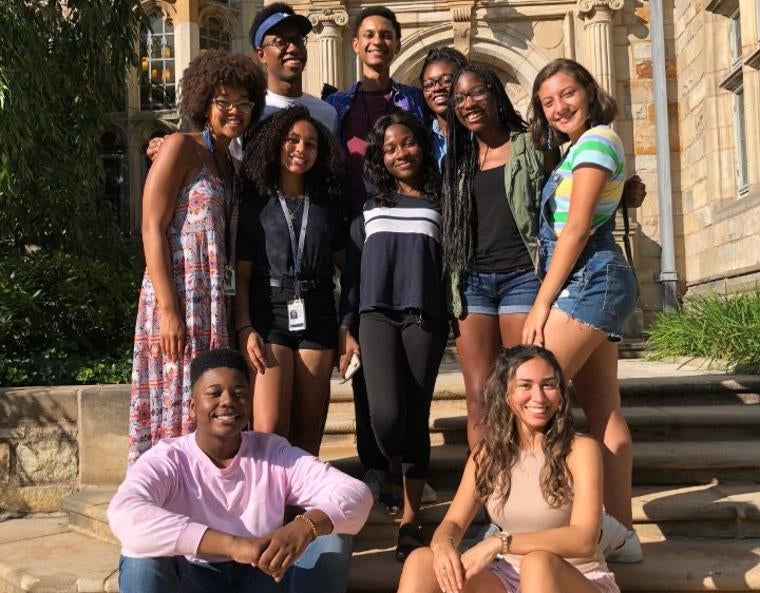 I first arrived at Yale near Phelps Gate after registration had ended, a fashionable two hours late. I was excited and apprehensive to begin Cultural Connections (also affectionately shortened to CC.) For one week, incoming first-years of color get a taste of campus life, performance groups, resources, and network with each other. During the pre-orientation program, we were divided into families of around 8, each with two CC “parents,” or upperclassmen who would guide us and help us bond. My parents, Amani and Darwin, helped me with my luggage, walking across old campus to my room, and then to what was left of the opening ceremonies.

“How was your trip?”

I looked around. Leaning oak trees hid the expansive view of Yale’s ornate arcitechture. Echoes from a speech in Battell Chapel gently whistled across the campus green. It was a hushed, mellow introduction into a part of my life that I’d expected to feel bigger and ceremonial. Still, the absence of fanfare was grounding, and it helped ease my growing sense of uncertainty.

I’d never felt especially confident in my own blackness. I grew up in a predominantly non-black neighborhood and had very few black friends. I never learned the Cupid Shuffle, or what a handshake was supposed to look like. I wasn’t sure I’d have any strong “cultural connections” to any other first-years at CC. The first hour or so at Battell was inhabited by a few awkward, hollow silences.

Everyone’s parents would shout “CC” to get the group’s attention when something was about to start — which sounded weird and oddly funny at first, until it caught on and we dropped our voices comically deep to join in on the chant. Even walking around on campus now, I’ll say the call-and-response line in lieu of a hello when I see someone from my CC family.

The next day came, and I let my guard down a bit more. We all competed in the CC Olympics — or at least, tried to, until I accidentally ripped a hole in one of the pillowcases during the potato sack race. 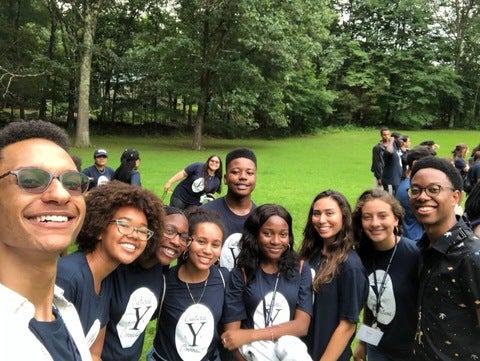 Me, my CC sisters, my CC brother, and our father Darwin.

We began our “dream journals,” staying awake until 2 a.m., telling the stories of everything that got us to that moment. I went last, because I wasn’t sure how much (or if) I wanted to trust this group of apparent strangers. Still, as my family laid their cards on the table, I felt more at ease. During the CC talent show, the poetry jam, in our small group discussions, and in our family meetings, there was this mysterious, unwavering sense of support. We’d never met before, but celebrating our identities and journeys accelerated our friendships. 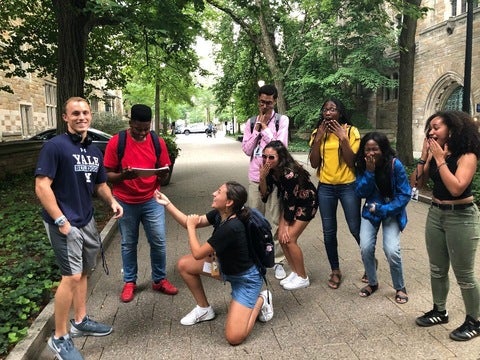 The prompt for this scavenger hunt picture was “Propose to a student athlete.” Can you tell how uncomfortable he was?

There were conversations about how hard and long we’d worked to make it to Yale, about every obstacle standing in our way. Yet, there were still moments to breathe. To exhale. To have fun. To simply be. As CC continued, we saw performances by a capella groups, dancers, and slam poets, and I couldn’t help but surrender to the joy that seemed to permeate each day. It was an intoxicating, unifying happiness.

I was surrounded by so many smart, talented, kind people during CC, and that one week changed me — in the best, most corny way possible. To the outside observer it sounds like an enormous, unbelievable cliché or the moral of a Disney film, which I understand, given how fantastic and surreal of an experience it was. It wasn’t a utopia. But, it was a place where I felt like I could be vulnerable, and that was okay, or I could hold back, and that was okay, too. I felt celebrated.