Just two days before Halloween, all of campus was preparing for Superstorm Sandy’s arrival. Classes were cancelled on both Monday and Tuesday. A campus-wide curfew was put into effect at 5:30 p.m. on Monday, keeping us cooped up in our residential colleges until the following morning.

Except for a shattered bus shelter near Commons Dining Hall and a few fallen trees, Yale weathered this pre-Halloween surprise well.  While much of the Northeastern US was taking a beating, we Yale students were lucky to be nestled in our residential colleges with friends, food, and electricity.  The class cancellations were almost like a two-day extension to our Fall Recess – the perfect opportunity for total (un)productivity and Halloween costume planning with friends!

While the Yale community was incredibly lucky to make it through the storm unscathed, much of New Haven and the surrounding area remained powerless for days.  To help those affected by the storm, Commons Dining Hall offered discount meals, and Payne Whitney Gymnasium opened up its showers for anyone in search of hot water.  Yale’s trees also emerged from Sandy a little worse for wear.  Less than half an hour after storm curfew began, I looked out my common room window to see huge branches falling from Timothy Dwight College’s beloved Gingko tree.

Late Tuesday, the evening before All Hallow’s Eve, an unsuspecting passerby on the historic New Haven Green spotted something eerie in the upturned roots of a large oak tree.  What appeared to be bony remnants turned out to be an entire human skeleton, suspended upside down in the tree’s roots, the skull still attached.  Rumors quickly flew around campus as news of the mysterious skeleton spread.  News reports now inform us that these bones likely date back to colonial times when the New Haven Green was a burial site. 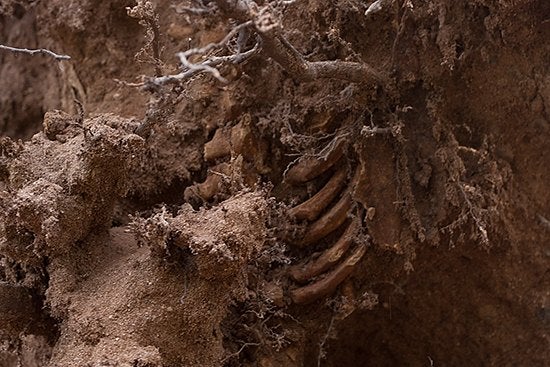 Who knew that just over a week later New Haven would be the fortunate recipient of nearly a foot of snow?! As New Haven cleaned up from Superstorm Sandy, power was gradually restored. Yale students partook in much-anticipated festivities, including the Yale Symphony Orchestra’s midnight Halloween Show and a week full of creative costume events around campus.  The skeleton investigation continued, and local children anxiously awaited November 7th for Halloween Trick or Treating: Take 2.

(Intersection at York and Broadway during the snowfall; photo credit Emily DesMeules, Yale ‘13)