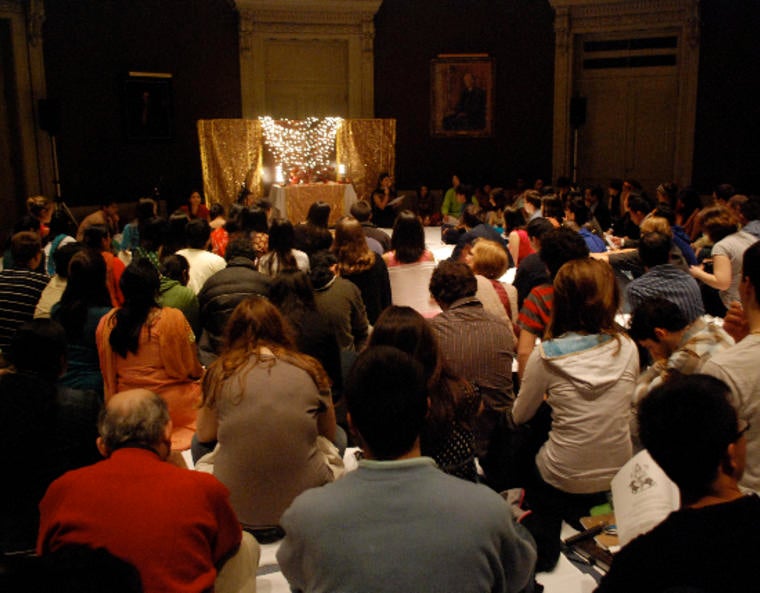 I just got off a phone call with my mom the other day. She had called to say Happy Diwali but left a voicemail instead when I didn’t pick up. Ironically, I was at the Yale Diwali Pooja in the President’s Room in Woolsey Hall (the beautiful building in Beinecke Plaza with the rotunda and walls dedicated to veterans). Diwali, the Hindu festival of lights, celebrates the return of Rama from his 14-year exile to his kingdom.

Our conversation later that night went something like this:

And at that moment, I didn’t feel so far away from home. It’s not rare for us college kids to say “we’re going home” and we mean our dorms. Even when we are at home (for me, New York), I catch myself saying, “Mom, I think I’ll go home Sunday.” And she goes, “But you are home.”

Before I had realized it, Yale had begun to fulfill so many of the roles being at home did. And sometimes, Yale was even better than home because I could share my heritage with so many others. There were people from all walks of life at the Pooja, and it was the first time I had sung some of these hymns, too.

It’s interesting how my identity at Yale is so different than what people knew me for in high school. They know me here as the Bollywood girl, or the girl who supports her fellow South Asians and South Asian Americans by doing the annual cultural act, Roshni, where we dance to Hindi cinema and Punjabi tracks. In high school, I was the newspaper girl. The senior. Sometimes that girl who knew what she was doing.

It took me the journey to Yale, precisely because it was so far away from my family, to realize how meaningful my heritage is to me. And, at Yale, it’s been easy to reconnect. I have taken two years of Hindi here. I started up a South Asian Film Society (we watched PEEPLI Live a month after it released). People have been supportive—be it my professors, my friends, my co-workers. They want to know who this Snigdha is. Only at Yale.