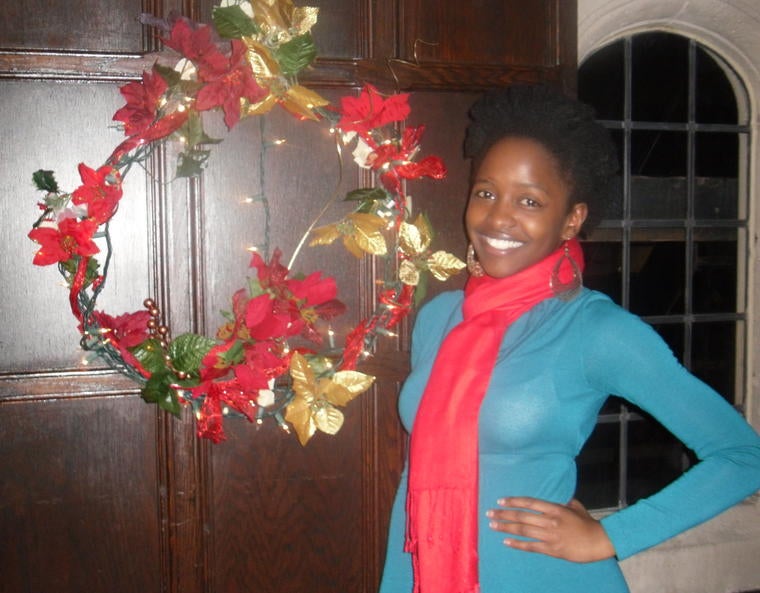 December is a special month, not because of finals (ahhh!), but because of the number of festivities in the month. Christmas, Kwanzaa and Hanukkah all fall in the month of December, and there’s not better place to be at such a time than Yale University! Because we are extremely multicultural, all these celebrations are held on our campus, and I got attend all them, munching away at the variety of foods offered at all the different events.

The first celebration on the list was the Annual Christmas banquet, held for freshmen in the biggest dining hall on Campus, Commons, and for upperclassmen in their different residential colleges. My residential college, Davenport, provided me with the most scrumptious meal of the semester for the Christmas banquet. In addition to the normal variety of rice, breads, cereal etc, (see http://www.yale.edu/dining/ for more information on how well I’m fed everyday!), we had a pasta bar, with an ACTUAL CHEF that took our pasta orders! The choices were endless. From shrimp gumbo to a cheddar mix, we were all left more than content.

Following that was the annual Kwanzaa ball, which is a celebration of the African-American tradition of unity. The event was sponsored by the Afro-American Cultural Center, and was an elaborate ceremony with wholesome soul food like fried chicken, candied yams and collard greens, as well as the lighting of candles to honor the seven different principles of Kwanzaa. This was an informative celebration, as I had never heard of Kwanzaa before, but it was also a lot of fun with great food, great people and great music.

Immediately following Kwanzaa ball was the Kwanzakah party, which was a collaboration between the organizers of Kwanzaa and the Slifka Center, which is the center of Jewish life on Yale campus. The party was to honor the two ceremonies of Kwanzaa and Hanukkah, and was a great success that drew a lot of people! The next week housed the the Hanukkah Ball, which was also a great feast that was open to everyone on Yale Campus.

So, where should you be in December? YALE!