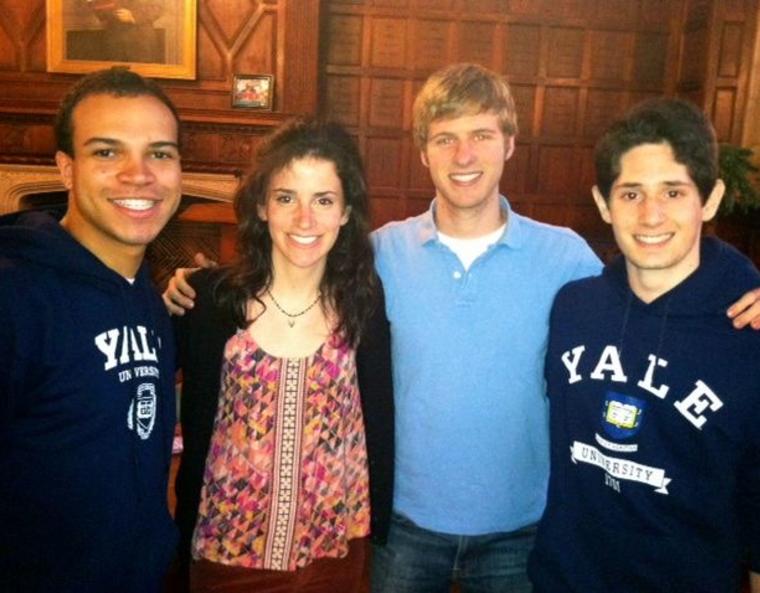 My younger brother is 16 years old. We’re great friends and we have a lot of fun together. Although he still hasn’t accepted my friend request on Facebook, we’re pretty open with each other. But there’s something that he doesn’t know… I have three other siblings at Yale.

The summer before your freshman year at Yale, you are paired with “Big Sibs” in your residential college. Big Sibs often share your academic and/or extra-curricular interests. Aside from giving you advice about what classes to take or what activities to get involved with, Big Sibs also provide guidance on easing in to life as a Yalie. As upperclassmen, Big Sibs have been through it all. They are adjusted to life at Yale and can help you navigate through your first year.

My Big Sibs (‘Hounsibs, since I live in CalHOUN), Jenny and Sam, are some of the coolest people I’ve met at Yale. Jenny is junior studying pre-med with a focus in biology and is President of the Junior Class Council, Yale’s student-body government for juniors. Sam is a sophomore majoring in psychology and is a member of The Yale Alley Cats, one of Yale’s premier a cappella groups. In addition to being my ‘Hounsibs, Jenny and Sam are act as Big Sibs for my roommate, Carter. Together, we form a beautiful “HounFamily.”

During freshman orientation, Jenny, Sam, Carter and I got together several times to get to know each other. We went to an ice cream social. We went out and got fro-yo. We had an ice-cream sundae party. (Notice a pattern?) Given that Calhoun’s freshman dorm, is situated on Old Campus with all of the other freshman dorms, it can sometimes seem to be a world apart from Calhoun. Jenny and Sam helped to bridge this divide by introducing Carter and me to all things physical and spiritual that Calhoun has to offer. At the same time, as a ‘HounFamily we strengthened the famous and much-envied Calhoun community—lovingly called, “The Mother Houn.”

In addition to providing guidance, Jenny and Sam enabled Carter and me to create and cultivate relationships with upperclassmen in Calhoun and, throughout Yale College. For example, when Carter had a question about what freshman seminar to take, Jenny introduced him to a couple of friends of hers who had taken a variety of seminar classes. When I had a question about theater at Yale, Sam put me in contact with a few of his friends who were involved with the performing arts.

Although Carter and I are now well adjusted to life at Yale, we still meet up with Jenny and Sam. In fact, we make an effort to meet for a meal (and ice-cream or fro-yo!) at least once a month. Last night, we got together and caught up on our spring breaks and summer plans. It was great to hear about Jenny’s plans to apply to med-school and Sam’s a cappella trip to Hawaii. At dinner, Carter broke the news that his cappella group, Out of the Blue, had just won the International Championships of A Cappella Northeast semifinals. I told them about my summer plan to work in the curatorial departments of several museums in New York City.

Next year, Carter and I will get our own ‘HounSibs. But this doesn’t mean that our current “HounFamily” is finished. We will still meet up with Jenny and Sam for monthly meals and talks. We just might bring our own ‘HounSibs along too!

Carter and I look forward to providing the Class of 2016 with the same sense of home, belonging, and ‘HounLove that Jenny and Sam created with us this year.