My First 24 Hours at Yale 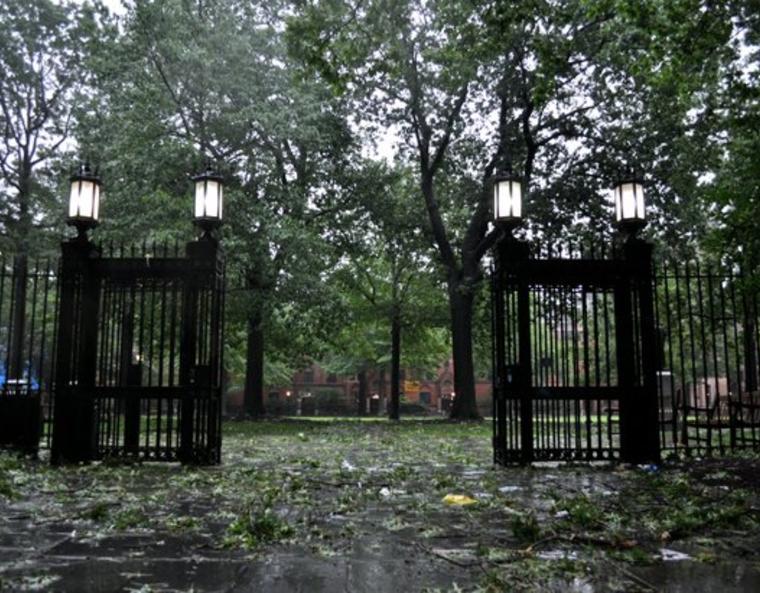 Every August, freshmen arrive on campus and begin a weeklong orientation called “Camp Yale.” After upperclassmen in their college help them unpack and settle in, freshmen dive into a series of meetings and activities that welcome them to Yale

But this year was different.  Right in the middle of orientation, Hurricane Irene hit Yale and the entire Northeast Coast.  Fortunately, no one was hurt and Yale’s campus did not experience much damage or any power outages.  However, we were told to stay indoors for 24 hours until the storm passed.

Here’s how I spent those 24 hours of “Calhoun Cabin Fever”:

Saturday, 5:30 pm: Mandatory meeting with our Master and Dean in Calhoun. We’re told that Hurricane Irene is headed our way and that Yale College wants us to remain indoors for the next 24 hours.  We’re given bags of food to last us for the next day, and we immediately start planning midnight picnics in common rooms and entryway staircases.

Saturday, 6:15 pm: My suitemates Carter, Jake, Cody, Caleb, Javier, and Damian and I decide to look through Yale’s course catalogue to see what classes are offered this semester.  I discover the joy of flipping to a random page and finding courses like “Women, Food, and Culture” and “The Physics of Dance.”

Saturday, 7:14 pm: Some students receive an email from sender “Hurricane Irene” with the subject line “I’m coming” and no body text.  Who knew that Hurricanes had gmail accounts?

Saturday, 8:19 pm: There’s a knock at our door.  Emily, Kate, Elle, Grace, and Danielle from suite A21 have come to introduce themselves.  I’ve seen a few of them around before, but none of us have really spoken with one another.  We discuss theater, improv, dance, music, intramural sports, and of course, a capella.

Saturday, 8:33 pm: Another knock.  More people have come by to say hi.  We decide to leave the door open so that other people can come by and introduce themselves.  As the night progresses, almost every new Hounie (a nickname for people in Calhoun) makes their way through our suite.  After a while, my suite decides to explore Bingham.  Most suites have their doors open: some suites have music playing, others are watching movies.

Saturday, 9:15 pm: Julio, one of Calhoun’s Freshman Counselors (seniors who live with freshmen and act as their “big sibs”), sends out an email saying that he’s throwing a karaoke party.  Everyone is invited.

Saturday, 10:00 pm: There are over 20 people in Julio’s suite.  The lights are off and we’re singing  “American Pie.”  Some people don’t know the lyrics, but the words are projected onto the wall and everyone tries to sing along to the music video.  After “American Pie,” Julio puts on Whitney Houston’s “I’m Every Woman.”  At a certain point I realize that I’m laughing so hard that I can’t even sing.  I’m not the only one.  Everyone has a smile on his or her face. 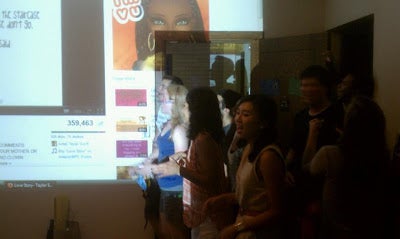 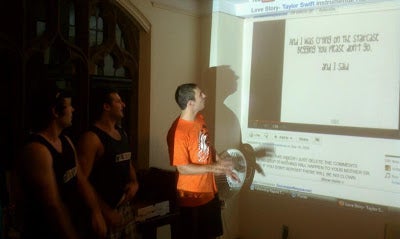 Sunday, 10:00 am: Everyone in my suite goes out into the staircase to eat breakfast together.  We’re still laughing about last night.  It’s raining heavily outside, and from our window we can see that a lot of trees lost branches and leaves over the night.

Sunday, 1:15 pm: After lunch, we start to unpack and decorate our rooms.  We speak about our summers and share our plans for the year.  Julio sends out an email saying that he’s lost his voice from karaoke but that it was worth it.

Sunday, 5:30 pm: The storm has finally passed, and we’re given the all-clear signal.  A few of us leave Bingham Hall and carefully explore Old Campus.  I have only been on campus for a day, but I’m already starting to feel some HounPride and HounLove.

Although I initially thought that Hurricane Irene would interrupt orientation, my 24 hours in Bingham Hall was the highlight of my first week at Yale.  Over the course of that day, I got to know my fellow Hounies beyond simple and brief introductions.  By the end of those 24 hours, I no longer felt like a stranger—I felt like a part of the Calhoun family.