10 Signs that you may be Experiencing Yale Withdrawal 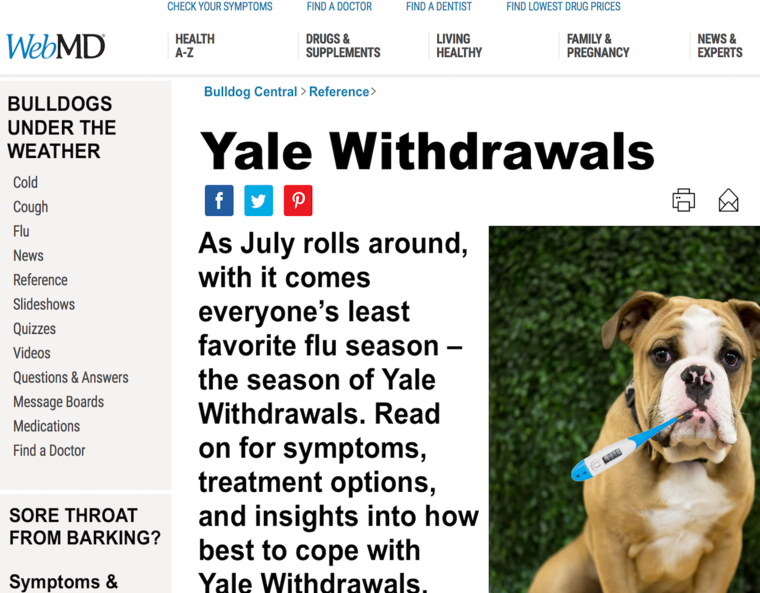 In high school, summer break means freedom. Freedom from a daily routine, freedom from pop quizzes in Algebra 2, and freedom to chill at the beach with your friends all day.

A Yale summer has that same freedom, just multiplied by a million. Yalies spread out around the world every summer, tackling insanely cool internships, conducting cutting edge research on campus and off, engaging in language immersion programs, traveling the world, volunteering, working on start-ups, returning home after two semesters away – you name it, there’s a Yalie doing it.

But, during these wild summers taking advantage of literally every opportunity known to humankind, you might start to feel like something is missing. You might feel a little off in a number of ways. If you’re experiencing any of the following symptoms, you might be suffering from Yale Withdrawal:

1. Your most visited website on your computer is Google Flights
The way that Yalies go to literally every part of the world over the summer is both a blessing and a curse. It’s a blessing because everyone is pursuing incredible opportunities and will come back with killer stories in the fall. But, it’s rough sometimes because you miss everyone. Even with the brilliance that is modern communication (thank you, group FaceTime), sometimes you just need to see your best friends in person. So, whether you’re actually booking flights, opening and closing that tab longingly, or dragging your friends still on campus up to Maine for the 4th of July like I am, you’re probably missing chilling in your common room with your squad.

2. You have about 12 time zones added to World Clocks on the clock app
You learn this one the hard way. Apparently it’s not fun to be FaceTimed at 4am. Oh well.

3. Your online shopping has shifted from Amazon to CourseTable
We don’t pick our classes until the first two weeks of school during shopping period, but that doesn’t stop Yale from releasing thousands of courses in the middle of June. So, if you find yourself making 394,234 potential schedules on CourseTable or Yale Course Search, you might want to see a doctor specializing in Yale Withdrawal.

I’ll get this narrowed down to five courses … somehow …

4. You’re shocked when local restaurants aren’t on Snackpass
At Yale, the student-made app that gets you insane deals and free food at New Haven restaurants is completely ingrained into our every-day lives. You don’t order food, you Snackpass it. It hits hard when the Tropical Smoothie Cafe in Maine actually makes you pay more than $1.99 for a smoothie. I shed a tear when a friend on campus sends me a free point at Junzi Noodle Bar that I won’t be able to use for 2 months.

5. You are surprised when your summer friends don’t get excited when they see a bulldog
You never know where Handsome Dan could be traveling!!

6. You have brunch withdrawal
Yalies have this ~thing~ about brunch. It’s somewhat of a sacred time on weekends, scrambling into your residential college’s dining hall at 11am to drink too many homemade smoothies, make chocolate caramel waffles with a giant Y imprinted in the middle, and see what crazy combination made it into the Chef’s Choice Frittata this week. If you’re like me, you might break away from dining hall brunch a few times (*gasps*) to get a taste of the cinnamon bun pancakes at The Pantry, snag a cookie butter crepe from Crepe Choupette, have the Elvis waffle at Maison Mathis, or scour the brunch menu that changes every week at Bella’s Cafe.

I don’t know which is my favorite, the cinnamon bun pancakes, the residential college brunch, or the crazy ever-changing menu at Bella’s, but I do know that I MISS IT ALL.

7. You’re refreshing Yale Facebook more than you should be
Did you host a really awesome pre-frosh who you’re praying got sorted into your residential college? Want to see who’s gonna live in your first-year dorm so you can tell them about the little balcony outside the window? Whatever the reason, Yale’s student-only directory might be popping up on your search history a lot. For upper level students, it’s fun to see it refreshed in early July to see the profiles of all the new students in their res colleges. For first-years, you can put some faces to the names of the suitemates sent to you in an email! I wish that I had known about this before I added someone on Snapchat, Facebook, and Instagram with the same name as my first-year roommate (even though she wasn’t the right person, whoops).

8. You’re offended when people from home ask you if you prefer Pepe’s or Sally’s Pizza
WHY does nobody UNDERSTAND that there are at least EIGHT A M A Z I N G pizza places in New Haven?? BAR, you have my heart.

9. Everyone you hangout with over the summer tells you to stop talking about Yale
Find yourself telling a million stories about your first year on campus? Accidentally hum the Yale fight song at your desk? Wear a Yale sweatshirt literally everywhere? Make a huge fuss every time a TV show or movie has a character going to Yale (this summer it’s bad, with Booksmart, The Society, and that Netflix movie with Noah Centineo). Yeah, you’re done for.

10. You have a countdown on your phone counting the days until you can see your Yale family again
This one pretty much speaks for itself.

So, think you might be experiencing Yale Withdrawal? Not to worry, there is one very simple cure – it’s the arrival of August 21st when the dorms reopen and you can have dramatic reunions in the middle of the quad. The summer is made more amazing knowing you’ll be able to share it with everyone when you return in a few short weeks. Don’t ask me what you do after you graduate, though, I’m still working on researching that medicine.