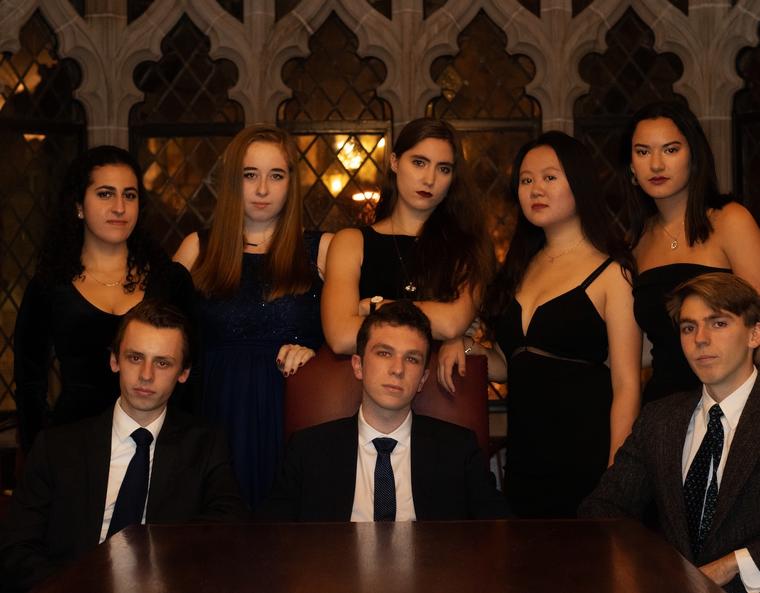 There are a few things that people will ask you without fail when they find out that you go to Yale. If a Yalie themselves, they’ll want to know what residential college you live in. Others will ask which side of the great New Haven pizza divide you lie on, Pepe’s or Sally’s (Pepe’s, but honestly BAR is underrated). Then comes the final question: so you’re basically, Rory Gilmore from Gilmore Girls, right?

When I applied to Yale, I really didn’t see a solid understanding of Gilmore Girls as a necessary prerequisite for attendance, but some of my friends acted like I’d just said I hated Handsome Dan when I told them that I hadn’t seen the show. Now, no hate from the Gilmore Girls fanatics, but I never really got that invested in this particular Netflix binge (I’m more of a Gossip Girl fan myself). Nevertheless, after arriving on campus, I figured I could spare a few minutes to watch a few of the episodes during Rory’s time at Yale to see how accurate it was.
Now, the show isn’t filmed at Yale, but I will say that the producers did a really good job of recreating some spots on campus. On the first day when Rory moves in to Old Campus (the quad where about two thirds of first years live), there’s a shot of her mom, Lorrelai, in front of a large gate. This gate is pretty similar to Phelps Gate, where all first-years on old campus are usually greeted by upperclassmen swarming their cars to carry their belongings up to their dorms. I will say that Rory living in Durfee Hall as a newly minted Branfordian should raise some eyebrows: Durfee Hall houses Morse College’s first-years, not Branford’s. That being said, they also did a pretty good job of mimicking the dining halls — the one Rory is eating in below looks scarily similar to Grace Hopper’s dining hall. 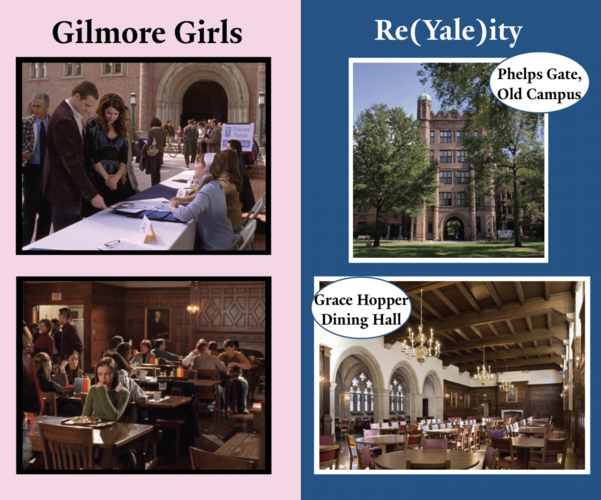 The photo of Rory from the dining hall looks just like the back right corner of Hopper.

There were other parts of the show that weren’t exactly right about Yale, like not knowing your suitemates until move in day — don’t worry, we give you a two month heads up if your new suitemate is your high school nemesis turned best friend (I never understood the dynamic between Rory and Paris, what can I say). But, perhaps the Gilmore Girls/Yale crossover that I can truly shed some light on is the Yale Daily News, the oldest college daily newspaper and a huge part of both Rory’s time at Yale and mine.

I’m not the editor-in-chief of the paper like Rory was. Instead, I’m on the Managing Board as a Production and Design Editor, meaning I lay out the paper a few nights per week and design graphics and advertisements. Even though I’m not a reporter, the YDN gives me insight into how journalism works and why it’s important, on college campuses and nationally. It also feels like a second home within Yale; the paper has its own building on York Street where a couple hundred students go to write, design, illustrate, and hang out each night.
So, how accurate are Rory’s experiences? Well, one famous scene from the show depicts Rory and Paris wearing newspaper hats, and that’s certainly true. When becoming a staffer, a process that we call “heeling,” the editor-in-chief gives you approximately 3 minutes, one newspaper, and no tape to make a hat. It’s safe to say that they don’t look quite as nice as the ones in the show. 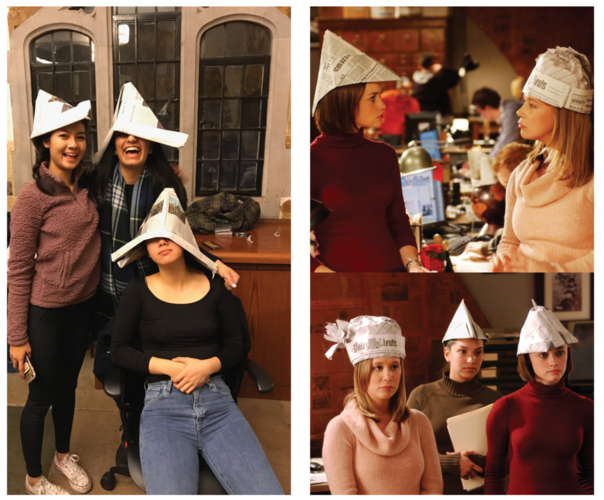 Who wore it better, my friends ready to become staffers or Rory and Paris?

Another famous moment from Rory’s time at the YDN is when she is voted in out-of-the-blue as editor-in chief. Those who are actually on the YDN board probably wish this was the truth — the actual process for electing a new editor-in-chief takes around 15 hours. The outgoing board and incoming board sit in our boardroom for a full day hearing platforms and debating new leadership. It’s worth it because they can shape how our paper runs for a full year, but it takes f o r e v e r.

The YDN has a lot of fun traditions that aren’t necessarily outlined in the show. As a part of the heeling process, for instance, we go through all of the YDN archives. These archives include all the newspapers we have ever printed, all the way back to the founding of the publication in 1878. They’re stored in huge, newspaper-sized leather-bound books, and there are hundreds of them. We also have a banquet every year, where that year’s board and all past board members get dressed up and have a fancy dinner with a speaker; this year, YDN alum Phil Rucker, the White House Bureau Chief for The Washington Post, came to talk to us.

Gilmore Girls also misses out on some of the smaller traditions. My team, for instance, holds a crepe night every Halloween. New production and design trainees meet the current editors and the editors of years past. And we really go all out on these crepes (we’re talking pumpkin, red velvet, nutella, pumpkin-spice whipped cream — the works). 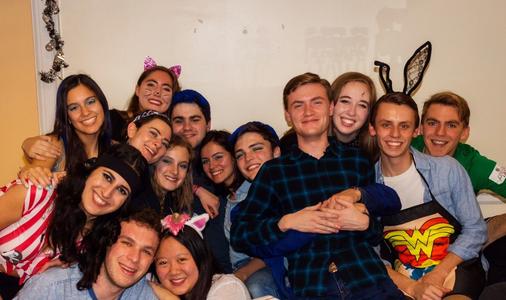 Multiple generations of the Production and Design Desk, decked out for Halloween and ready for crepes!

So, although Gilmore Girls hits on a few key points, it doesn’t quite nail the Yale Daily News, or Yale as a whole. Maybe that’s a good thing. There are so many fun traditions and activities that are unique to Yalies and our student groups. There are some parts of the Yale Daily News (and Yale) that you really have to see to believe.