When Your Professor Wins the Nobel Prize 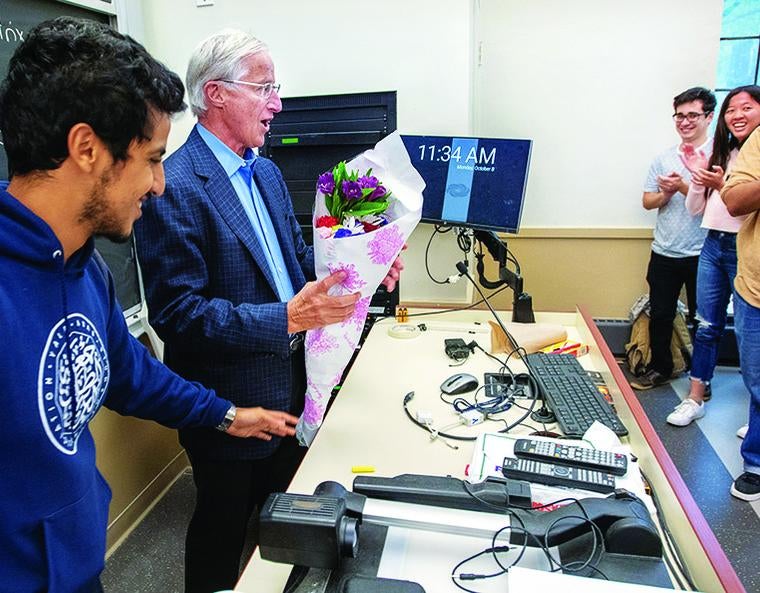 Everyone studies differently the morning of an exam. Last Monday I used the precious minutes before my Intermediate Macroeconomics quiz to scroll through my Facebook feed—I’m all about maximum efficiency. Amidst ads and Yale memes, I passed a picture that nearly made me drop my phone. There he was, my economics professor, William Nordhaus, on my Facebook timeline. It was as if Professor Nordhaus somehow knew I wasn’t studying and was sending me a sign to get back to work.

Upon closer inspection, I saw there was no divine intervention in my study habits. Instead, the photo linked to a New York Times article announcing the man who teaches my class every Monday and Wednesday just won the 2018 Nobel Prize winner for Economics. I’d like to say that my first reaction was Oh my god, this is so cool! I’m literally the student of a Nobel Prize winner. The same man who shared his popover recipe was just recognized as the brightest economic mind in the world! But, full disclosure, my first thought was I wonder if we are still going to have that quiz?

Photo I took of Professor Nordhaus giving everyone two thumbs up (it’s blurry because I was simultaneously clapping).

Obviously winning a nobel prize is a huge, unique honor for any individual, but at Yale, (amazingly) it’s not that rare; Nordhaus is now one of four current faculty members to hold the prize. He joins the ranks of Robert Shiller, who also won for Economics in 2013, James Rothman, who also won in 2013 for Physiology or Medicine, and Sidney Altman, who won for Chemistry in 1989. Professor Thomas Seitz, who passed away on October 15 (just two days after Nordhaus won his prize), won the Chemistry prize in 2009. What’s special about these amazing academics is they’re not just here to research. All Yale faculty teach, and they’re not just teaching crazy hard classes only available to upper level students. Intermediate Macroeconomics, for example, is comprised mostly of sophomores.
Professor Nordhaus strolled into class the day he won the prize, photographers and reporters chasing him into the room. Instead of attending his Nobel Prize press conference, he asked to postpone it so he could come to class. He put his students first even in this exciting time. On the board, one student wrote “Congratulations, Professor!” and someone brought him flowers. We all cheered for him, and he gave us a big smile. Ignoring the reporters, he said “Wow, you’re excited for your quiz, huh?”

That day, Professor Nordhaus gave us a quiz and some advice. The unit on economic growth we’d be starting the next day was actually the groundwork for the research on carbon taxes and long-term growth that earned him the Nobel Prize. Just as he sat in Yale classrooms and was taught by Nobel laureates, he promised us that we had the potential to do the same.

Given that Yale is a renowned research university with many professors who lead their fields, I remember being concerned that my professors wouldn’t be accessible. It’s easy to imagine that faculty of such caliber would be unapproachable, buried in their labs or offices for most of the day. Yet the truth could not be more different: Yale professors are very accessible, and they love to teach. Whether it’s getting coffee with my critical writing professor, hanging out with the Statistics and Data Science professors in the Dana House, or learning from the 2018 Nobel Prize winner who skipped his press conference just to teach us the Solow Model, it’s clear to me that Yale professors care, both about their work and about me.
(lead photo courtesy of Yale Daily News)