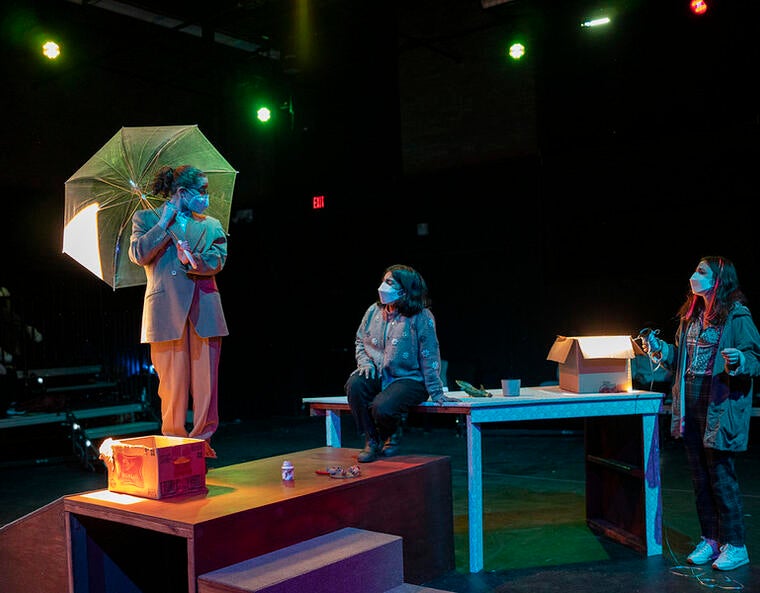 When I first arrived at Yale, I was bombared with and immersed myself in a throng of  performance opportunities — but after a few years, I wondered what happens behind the stage? And around it? And what goes on before the set is constructed, before the show is blocked, before rehearsals even begin? Well, starting in the fall of my junior year, I got to find out, as a producer!

Of what, exactly? Well, in Theater and Performance Studies department, current juniors in the major often produce current seniors’ senior thesis shows — holding weekly meetings between all the rehearsal and design team members (think scenic, lighting, costume, and sound), reaching out to potential new team members to onboard, handling publicity and advertising, coordinating visits to prop warehouses, putting together budgets, helping to apply for funding, and compiling ticketing information, amongst other tasks. Essentially, helping with and managing the nuts and bolts of how the play comes into being, and the day-to-day running of (the) production. Or, as a senior jokingly advised me last semester, “a lot of your job is making sure other people are doing their jobs.” To some, this all might sound a bit administrative and technical and supposedly removed from the art itself, but producing, I thought, might grant me a birds’s eye perspective of what it means to actually make theater, in the most literal sense of putting each tangible element of the show together.

So, when two senior friends of mine reached out to me during my gap year to ask if I wanted to produce, I said yes! 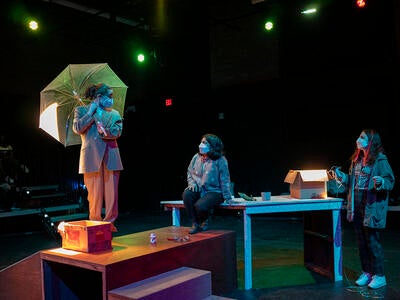 From one of the opening scenes of “This Could Be Something,” starring Naomi, Kavya, and Sophia! 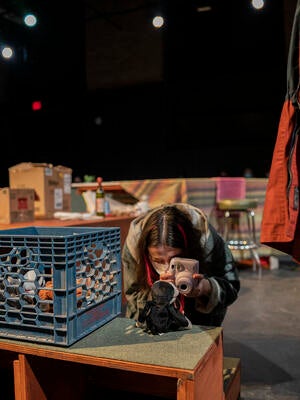 While any prop-heavy show will naturally have a lot of moving pieces, all the different and inventive elements make it that much more fun to watch!

My hand in the production for This Could Be Something — an audience-interactive show following five friends who have to suddenly move out of their apartment, and reckon with their attachments to all their belongings as they pack — began in the September of the fall of my junior year, peaked in February (with the full run of the show!), and then wrapped up around May with a last few tasks following the performance’s completion. Simply put, it was a wild and wacky time (in the best possible and most affectionate use of the words)! The show’s story was created collectively by the co-directors and all five members of the cast through a series of devising games, or a range of collective theater exercises including improv, that generated the scenes and attributes of the story — culminating in a play, in the words of the directors, “exploring our relationship with objects (things, stuff, junk!), particularly as they connect to the past and our relationships with loved ones… We’re investigating everything from materialism to art-making to personal memory.”

Leading up to show time, for the actors, (one part of) this ended up meaning preparing for a scene where part of the moveable set transforms into a bowling ramp that would be used to crush a coffee mug in a bag, live, during the performance. As a producer, that meant putting “bowling pins?? bowling ball? check budget props list update spreadsheet also email maybe about tricycle, get reimbursement for cat food receipt” in my notes. 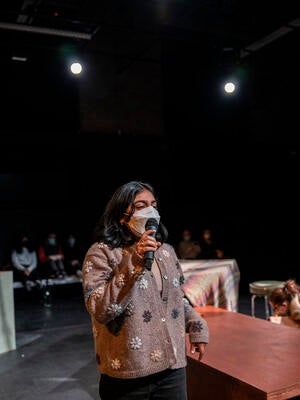 The game show part of the play!

Added to all this, of course, was the specter of COVID and how it might limit live performance. Production for the play began before Omicron arrived, and as the new variant hit in December, our plans had to be especially flexible. But even so, we made it work! The show went on! During tech week (the week all the technical and performance elements are combined in the theater itself, and the show as a whole is run), two of our five actors were exposed to COVID just days before opening night — so with some resilience and some stress also, Jacob and Vanessa, our two unshakably calm directors, reorganized and rewrote the affected parts of the show and worked through a new version of the script. Some lines were edited, some monologues became voiceovers projected into the space through live Zoom audio, some scenes even involved cast members partially over Zoom — and it all still made for a hilarious show complete with an escaped cat, a game involving tossing Beanie Babies into a box, three actors riding the same tricycle at once, and a group selfie, to name a few highlights. Despite the pandemic ongoing, and even with Theater Studies being one of the majors most severely impacted by COVID, a relatively normal senior thesis show was still able to go up! 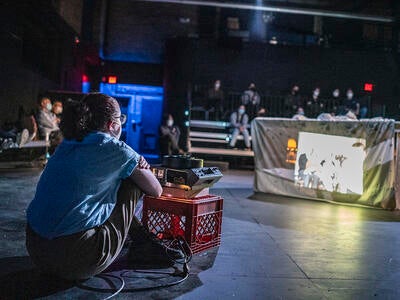 In addition to a projector, other props included: cake mix, canned tomatoes a tin of cat food, a red tricycle, a few trophies, and four different scented candles! 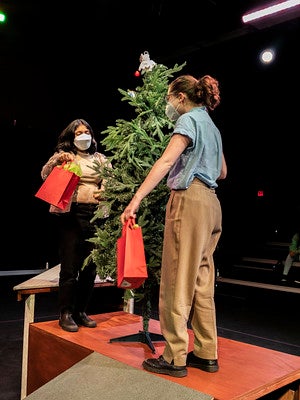 The Christmas gift exchange scene. Peep the angel bear Beanie Baby atop the tree! A good part of producing, or at least producing for this show, I learned, is the process of either helping folks find out where they can buy or rent props, or acquiring and budgeting the money for them! 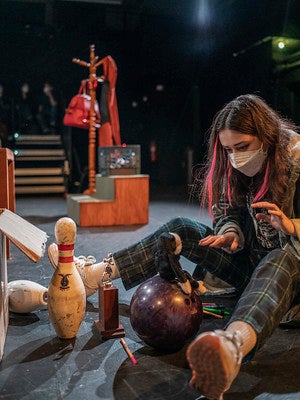 Yes, we did use part of the set as a bowling ramp to break coffee mugs on stage. All part of the performance! 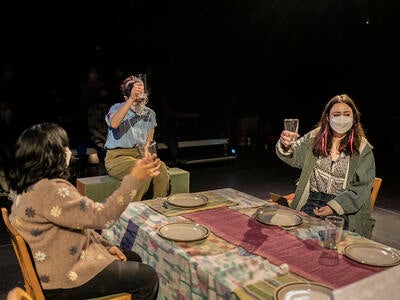 A final toast during the last scene! 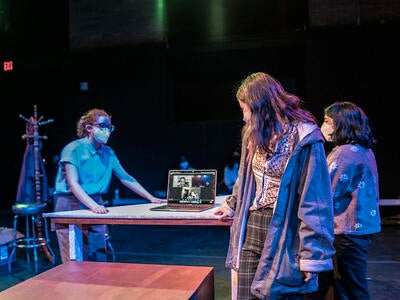 While some of the actors were contact-traced during tech week just a few days before the show, the show still went up (and went up well)! Here’s one of the scenes that had to be moved to Zoom!

I’ll probably stick to acting and writing in the future, but still, producing offered me a new entry point into theater — a way to imagine the show first in a series of distinct and isolated parts, before they merge together into a performance, with each one seeming all the more noticeable because of it.