I Really Miss My Friends 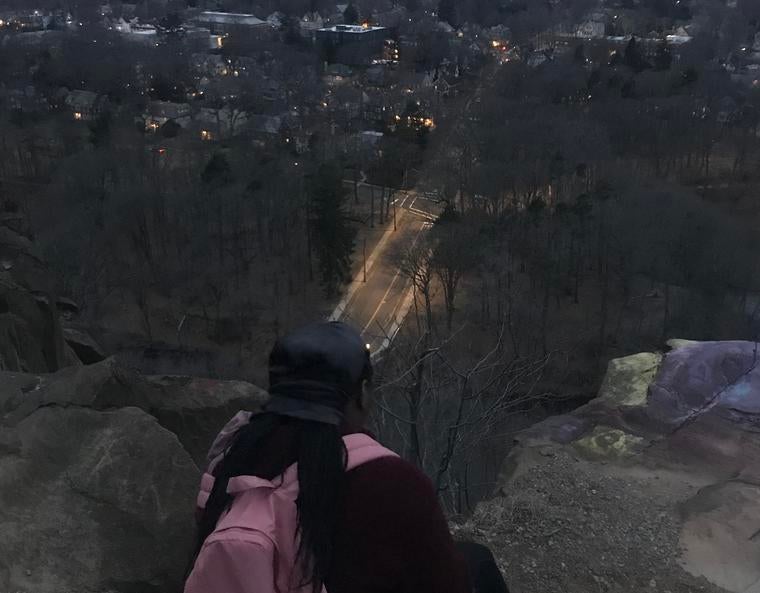 “Is this goodbye? No… No… What? I’m actually not going to see you, for like, five and a half months…”

My friends and I had had grand plans for the rest of the semester — how we’d swarm all the visiting admitted students (warmly called “prefrosh” by most Yalies) during Bulldog Days, how we’d be vibing when Ari Lennox sang or thrashing about when Rico Nasty rapped at Spring Fling, our poetry shows, theater group meetings, and monologue nights. But like many college students, our designs and the remainder of our time on campus were cut short by the COVID-19 outbreak — within a few days, during spring break, it became evident that our semester, and lives in general, were going to be remolded in the coming months as our Yale lives moved online. As Yalies returned home, or cancelled their plans to come back to campus, we knew, clearly, that there were many more pressing and dire issues than our individual college experiences and future plans.

Even so, when I remained and planned to stay in New Haven at the break’s beginning, I thought that I’d see my friends who’d left again before the semester ended. As my plans changed and I prepared to return home, I sat with the sinking realization that I hadn’t been able to say goodbye to my closest friends. Initially, I did feel a bit rudderless. A weighty new reality was imminent, and I felt especially lonely as it set in.

But for the time being, I wasn’t wholly isolated — though I was scheduled to leave New Haven by the week’s end, and nearly everyone I knew had left, some of my friends were still here. I resolved to spend as much time as I could with them while we were still here — and I’d get ready to bombard the rest with series of wholesome memes and texts. 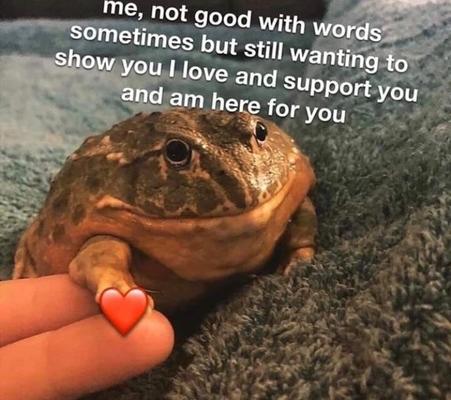 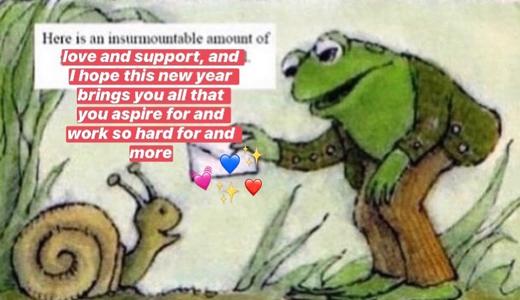 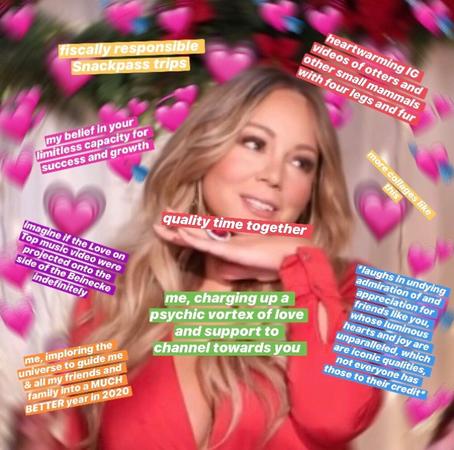 Old wholesome memes/edits I’ve sent to my friends! Sometimes, when you’re lonely, you just have to let your friends know you really care about them, but with hyper-specific and occasionally customized graphics!

Creating a library’s-worth of wholesome memes, and plotting to send them to my friends randomly? Some people might call it “spam,” sure, but I prefer the phrase “aggressive demonstration of my love and support for people who have altered the course of my life in an undeniably positive way.” I hadn’t gotten to say my semesterly goodbye to them, but what was to stop me from sending my friends a picture of Mariah Carey surrounded by a whirlpool of heart emojis? From FaceTiming and Zooming them to say hi as I made banana-chocolate chip pancakes? I looked for lighthearted things as a way of holding onto the best parts of the communities I’d found here. 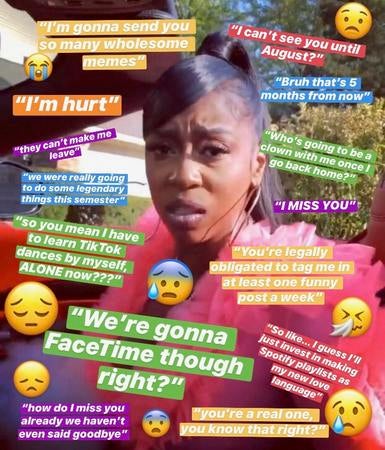 Yeah, this picture is crowded. And what about it? Maybe, in the words of Kash Doll, I am “doin too much” -  but that doesn’t change how much I miss my friends!

For my friends who were still here, I spent as much time with them as much as I could. We cackled and bantered during sushi dinners, ordered too much pizza and tried garlic knots for the first time while watching the second Purge movie (I can’t tell you why we skipped the first one, we just did), and tried to fill the space around us with enough laughter to echo continuously in our ears for the next five months. One night, me and two other friends, thinking about how so many artists include some variation of “dance until the sunrise” in their lyrics, thought we’d test that idea. So we danced from 9pm-5am, trying to hit delirious high notes and hyping each other up, transforming a suite into a ballroom.

I spent a lot of my remaining time on campus with my close friend Cleopatra. On our last day, we recreated last year’s Spring Fling (as well as what this year’s Spring Fling would’ve looked like) as much as we could — walking around with a bluetooth speaker playing Ari Lennox and Smino and Bad Bunny, sipping smoothies, eating dumplings and scallion pancakes in the middle of the Jonathan Edwards courtyard, laughing loud enough to make passersby stare. We walked where the sun shone as much as possible. We avoided the shade. As we shuffled across campus, one of us would periodically stop the other to share an out of pocket tweet or video. Our sidewalk dancing was sometimes questionable but always joyful. 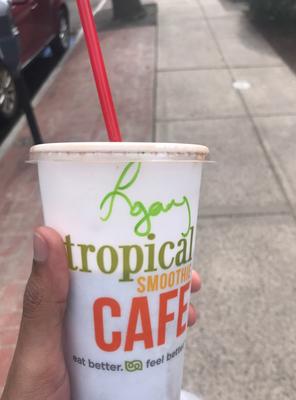 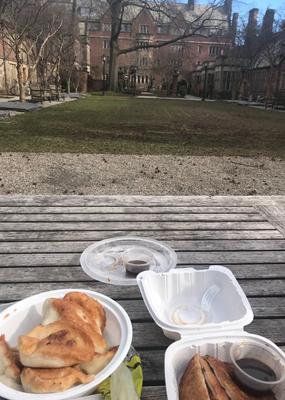 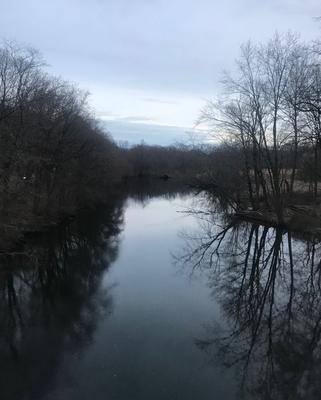 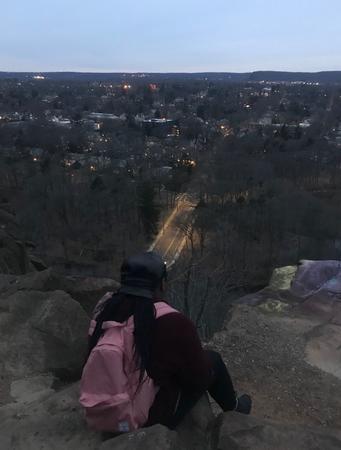 Highlights from our last day in New Haven!

“What if we hiked up to East Rock, just because?”

So we did, smoothies in hand. We raced sticks in the river (for those unfamiliar, each player drops a stick from the top of the bridge into the river, races to the other side of the bridge to watch, and whoever’s stick comes out first and continues floating ahead the quickest wins) and marched our way up to the trail’s summit. The city sprawled out before us. The speaker started playing Beyoncé’s “All Night,” which does, in fact, hit different when you’re listening to it atop a mountain.

As we stared out at the horizon, we tried to make the most of each minute and glimmer of fading light, yet the more we tried to savor the time the faster it seemed to pass. I was profoundly sad. Here, our dreams had been shared and big and wild and outlandish but seemed no less possible. I’d felt loved by so many people here in the most euphoric and warm way possible. I’d formed friendships that I thought and hoped would last after Yale, if not become lifelong. I understood that there were far more severe and pressing concerns outside of our immediate circumstances. Still, the sunset was a bittersweet reminder that all this was real, and that my time with some of the people dearest to me was running out.

But, I remembered, that lasting friendships would do just that: last. We’d have to engineer new ways to be our clown-like, excitable selves, but we’d find new ways nonetheless.

So, to my dearest Yale friends: when I send you memes that aren’t that funny, I (usually) know they’re not actually funny enough to share, but I send them anyways as a ploy to talk to you more. When I say “um” a lot and hold eye contact at the end of Zoom and FaceTime calls, it is because I’m naturally a little awkward and bad at ending conversations, but also because I’m thinking of more things to talk to you about so I don’t spend quite so much time alone. Yes, I do have a secret Spotify playlist titled “how I feel about my friends” that’s just “Adore You” by Harry Styles added ten times. I’ve been practicing my cooking (this mac n’ cheese recipe? fire) so that I can make you all too much food when we see each other again. I hope you’re all well and whole and safe. I hope you’re still finding ways to smile. And I miss you all, a lot.