MLK Weekend at the Peabody 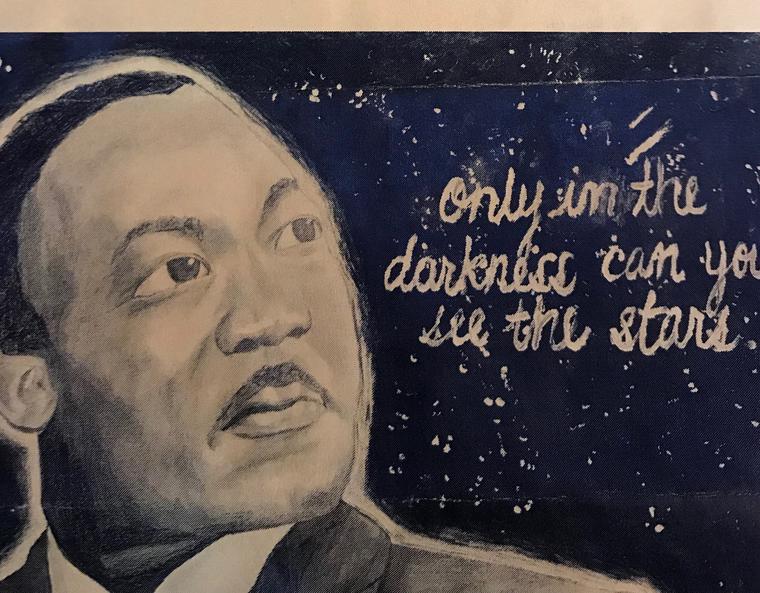 “Did you hear that?”

After trying to win a battle against snowy sidewalks, spontaneously materializing frozen tree branches, and a mysteriously well-camouflaged puddle, I arrived at the Yale Peabody Museum of Natural History drenched. Its most eye-catching feature is the massive Torosaurus statue outside, which I smile at whenever I walk by it, a reminder of my Jurassic Park phase (it was also the first Yale-related structure I saw during Bulldog Days!) The Torosaurus, tragically, never smiles back, which I imagine is because it a) has a completely different mouth/jaw structure than I and b) is a statue — point being that despite being in plain sight, this was the first time I’d visited the museum. Some of the volunteers handing out programs gave me a compassionate look that said: Nothing you’re wearing is waterproof, is it?

Wading through a very wet, very cold New Haven, I only knew that my performance poetry group was there to share our work, and celebrate Martin Luther King Jr. Day. After wandering around, finding a room where my shoes didn’t loudly announce my presence, I learned that the Peabody has made an annual event of honoring Dr. King’s legacy. It’s not something you’d initially expect to occur at a natural history museum, until you consider the intersections of environmental and social justice — but nevertheless it was an affirming surprise for me. 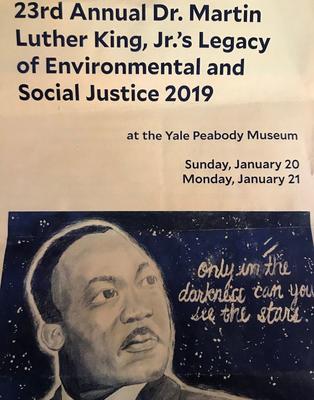 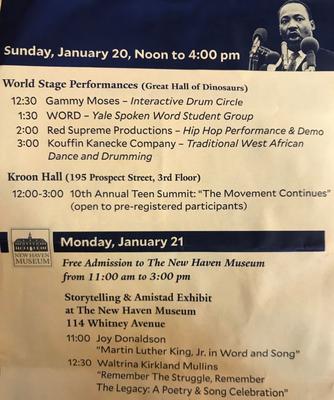 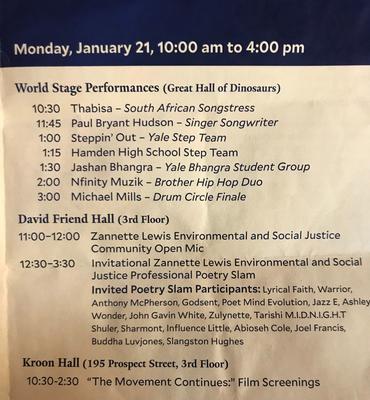 The program for the event!

I was early, so I patiently dripped and melted on a bench while the drummer performing before us hyped up the audience, the beats climbing through the air and reverberating in my chest. We were just one of several acts in a two-day event: drum circles, open mics, dancers, singers, and storytellers were also slated to help celebrate. For a split second, I was homesick, almost reminded of Denver’s own Black Arts Festival that happens every July. There were some parallels, for sure, between the two  — events that showcased black art, but also commemorated its history and the forces that helped it flourish.

Near the end of his set, the opening guest drummer led a small army of thrilled children in a rendition of Baby Shark (which, surreally enough, has been hovering around the 30s on the Billboard Hot 100 for a few weeks now? Think about that. It’s charting above Lil Wayne’s “Uproar” right now. Wild? Wild!) 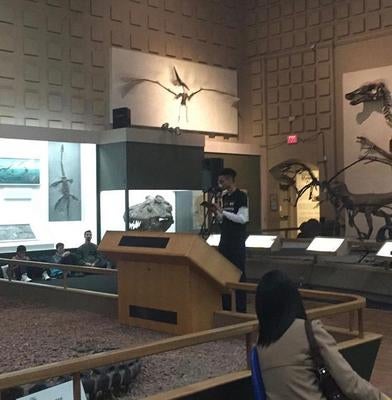 Me during my poetry reading! 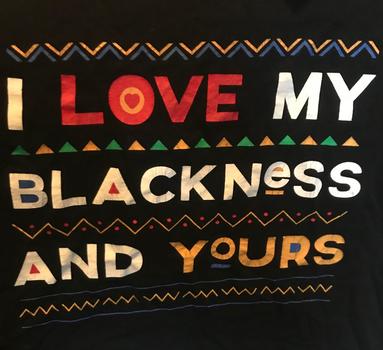 The t-shirt I wear to all of Denver’s Black Arts Festivals and some of my poetry readings!

Me and a few other WORD poets read two poems each, on topics ranging from racial battle fatigue, to self-care, to being the only black student in an English seminar, to spoken word’s origins and roots in oral history. Usually, we perform, we sit down, and the event carries on — but the Peabody felt different, less like a stage and more like a forum. It was a place to listen as well as speak, learn as well as teach, and our voices were more focused on conversation than presentation. It was also a resurrected memory — the day reminded me of summers walking on hot asphalt, of drumbeats that felt like gentle earthquakes, of dancing that seemed to invalidate gravity and an ocean of rhymes emanating from a mic. In all of New Haven’s bitter cold (I was not ready for a Northeastern winter!) here was a bit of warmth: a tradition reminiscent of a small piece of home, nestled somewhere I hadn’t expected to find it.