What The New England Wilderness Has Taught Me About Weathering Storms 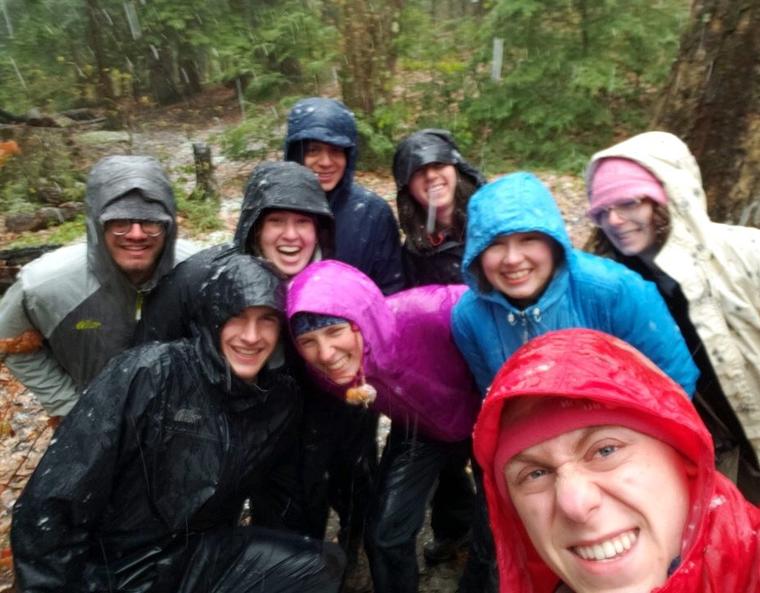 Around this time last year, I was feeling mildly unwell. The culprit was my typical post-exams cold, which appears when my body–after valiantly sustaining me through late nights, heinous snack foods, and frantic academic stress dreams–finally decides it has had enough and forces me to rest. This happens every semester, without fail. But last year, the post-exams crash coincided with leader training for FOOT (First Year Outdoor Orientation Trips), so I made myself power through.

My group was hiking a gentle stretch of the Appalachian Trail, I think in Vermont, and while we were loaded down with metal pots, pancake mix, iodine, and several ancient, enormous tarps, I didn’t think the hiking would be anything I couldn’t handle. It wasn’t the best I’d ever felt in my life–I had to keep stopping to blow my nose on dry, sun-warmed, pollen-coated leaves–but I was ok. And then we started up a hill.

Almost immediately, like throwing a switch, I stopped being able to breathe normally. Like a particularly attractive Victorian woman or an old computer, I faint/feel faint fairly often due to overheating. So, half of the sensation I was experiencing on the hill–lightheadedness, blotchy purple auras in the sky, ringing in my ears–was familiar. What was new was the wheezing, whistling sound coming from my chest. Exactly because I’d been trained in wilderness medicine, this sound scared me.

My friend Sam came down the trail and held my hand while I wheezed and cried and looked at him with what I assume was terrible panic. He admits now that this little episode was scary for him, too, though at the time he was very, very calm. Like we’d been taught, he showed me how he was breathing–in and out and in and in and out–and I tried to sync with him. After several minutes of this, I calmed down, and (after Sam took almost everything out of my pack and put it in his), we made it up the hill.

When I think of people now who are suffering respiratory distress, I think of this moment and how lucky I was that, though it was scary, it was brief, and I could, eventually, get up and keep hiking.

This August, I led my first FOOT trip. My extremely-capable co-leader and I were the only thing standing between eight first-years and death by starvation, exposure, or rabid giant beaver. While this trip was certainly a highlight of my junior year, it too had its moments of uncertainty. The difference was that this time, I couldn’t sit down in the middle of the trail. I had to be the person Sam was for me.

When you are backcountry camping in the Northeast in August, you need to be aware of black bears, who are mostly harmless to people but absolutely fatal to food. FOOT teaches us how to rig ropes, carabiners, a water bottle, and a weird sack into a pulley-esque device that lifts food off the ground and out of bear range. The raising of the bear bag takes place at night, when everyone is done eating and brushing teeth, and it has to take place at some distance from the campsite, in case a bear can smell the food even up a tree. So it was my job on that trip to stand alone between the campsite and the bear bag with my headlamp turned on, to serve as a human lighthouse for my co-leader and whichever FOOTie was assisting him as they filled and raised the bag. Sometimes I could see neither the light (a headlamp tied to the tarp) of the campsite, nor the light on the bear bag, and I often couldn’t hear anything but the mysterious snappings of twigs and forest-grunts of the wilderness at night. I sang the same (original) song over and over again:

We are some people, comin’ your way.

Don’t wanna surprise ya’, ‘cause we recognize ya

as an animal of prey! HEY! (Repeat)

I wasn’t afraid, I told myself, because it was no longer appropriate for me to be. Of course, I was lying to myself, and pretending to others, but I’ve honestly come to wonder if that kind of manufactured  confidence is really all adulthood is.

One day, after hanging the bear bag and returning back to camp to sleep, we awoke to the tarp above our heads swelling with water as a torrential downpour hammered every tree and rock and already-occupied lean-to in sight. There was nothing to do but sprint for the bear bag and then back to the tarp, soaking and shivering, to wait out the worst of the storm. We didn’t know if we would be able to keep hiking that day, or if we would need to evacuate. We didn’t know if a FOOTie would get scared or sick or hurt, but we had in our arsenal the ability to do our best to prevent those things. We didn’t know what the trail would look like when we returned to it. But I said the same thing to myself over and over again, “Storms always pass. All we can do is wait.”

By now, you probably see the rather heavy-handed metaphor at which I have been driving for the past several paragraphs. Here in California, it’s eighty-two degrees and sunny, but I, like you, am waiting out a major storm. It has been scary. It will continue to be scary for some time. The only light at the end of the tunnel is the one that has been there all along: all storms pass.