The Boola Diaries: Volume I

I love my job as an Admissions Office blogger, I really do. What’s not to love? My boss is great, my co-workers are super talented, and I get paid to write??? The dream!! However, sometimes in this life, one makes rash financial decisions, like–just for example–when one’s friend says, “Imagine if we flew to Nashville next weekend and went Bigfoot hunting,” and then one does, in fact, do that. Basically, what I’m saying is: sometimes, you gotta get a second job.

This could be a blog post in itself, but I’ll just quickly describe the Yale student jobs situation. Most (but not all!) of my friends are employed in some way on campus. On-campus jobs are abundant and varied–you can be a writing tutor, a Peer Wellness Champion, a fry cook in the buttery, a person sorting dead snakes in jars in the basement of the Peabody (never heard back on that one), a gallery attendant, or a residential college office aide. That’s just to name a few. Most of these jobs are listed on a portal that is accessible to all students. I was scrolling through this portal when I came across a job from Yale Athletics. Frankly, it was a fantasy gig: the mascot. 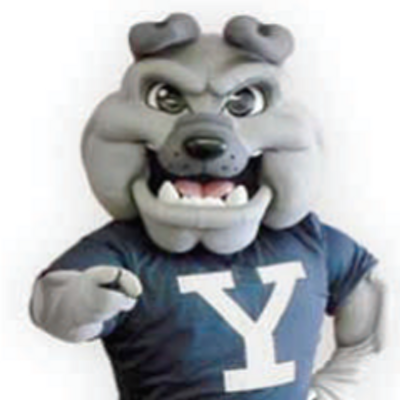 I have wanted to be a mascot for as long as I can remember. I am neither coordinated enough nor flexible enough to be a cheerleader. (I actually thought, when I came to Yale, that I might be able to make the cheer team because I was like, “It’s a school full of nerds, how good can the cheerleaders be?” Um, actually the answer to that question is VERY GOOD.) However, I figured I met the qualifications for mascot: enthusiastic, loves children, not afraid to look like an absolute FOOL.

Listen, I hate to describe myself physically here cause I want you all to think that I am simply an elegant mysterious soul who has no bodily form and uploads blogs from her floating brain. But I will say that I am short. In a way that is noticeable. There are a lot of things I can’t reach. I was worried that my shortness would impede me from being the mascot, but it did not. After an interview, I got on the suit and felt right at home.

At this point, you may be alarmed. You may be saying to yourself, isn’t the Yale mascot an actual living breathing English bulldog named Handsome Dan? You may be thinking I flayed this dog alive and put on his skin as a suit. Never fear! Handsome Dan is definitely the main mascot, and he is a real dog, and he makes appearances at most athletic events and is fawned over by everyone. However, there is also a secondary mascot named Boola who is a person in a suit. The suit looks like a buff, grey, two-legged bulldog. Boola is definitely less powerful than Handsome Dan. A good analogy would be that of Great Britain: Handsome Dan is the Prime Minister, Boola is the Queen–a mere figurehead, but one with at least some symbolic heft. 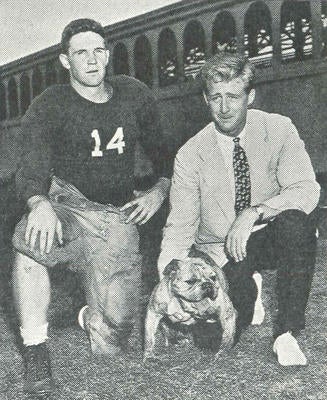 A very frightening picture from back in the day, when apparently Handsome Dan was super jacked.

The mascot job is very mysterious. I cannot reveal too much, especially because I have yet to actually work a game. Like the blogging job, the mascot job is a team effort, meaning I am one of several potential bodies in the suit (not at the same time). The identities of these other people shall remain a secret. I can tell you that in my training, I have attended at least two sports games that I wouldn’t have attended otherwise, but was very delighted to be at. And I have also attended a cheerleading practice. They were very kind to me.

Thus concludes the first entry of the Boola diaries. More information to come as I navigate this brave new world.