The Reality of Finals Period 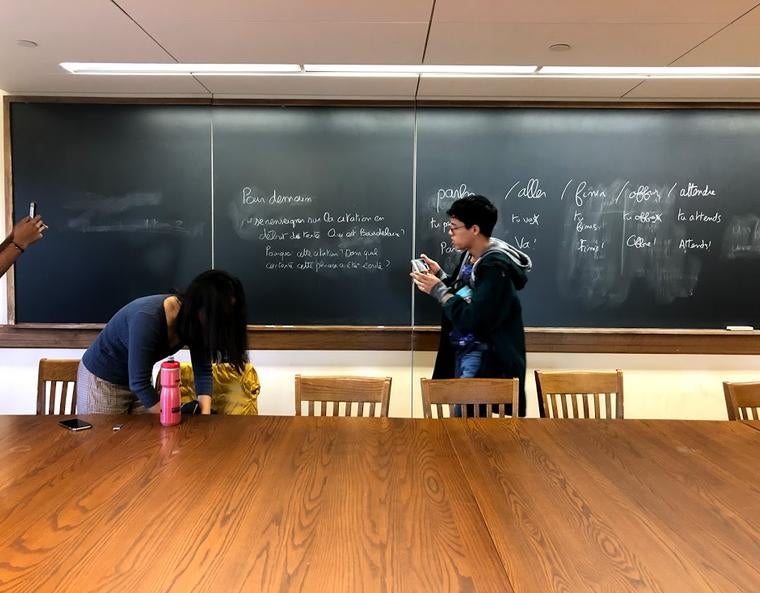 Today would have been the last day of reading period. At the end of every semester, reading period provides a week to study and review course material with no classes before diving into final exams.

There have been so many parallels between Nora Ephron movies (highly intellectual choice, I know, did I mention I took a whole class about Italian film??) and whatever crazy stuff is happening right now in quarantine. Or rather, whatever crazy stuff quarantine has compelled me to think/feel/dream. The most popular of Ephron’s films are classic rom-coms like Sleepless in Seattle, When Harry Met Sally, You’ve Got Mail, etc. These rom-coms, as superficially entertaining as they may sound, actually have layers of funny B plots and peculiar minor characters.

Take Patricia Eden in You’ve Got Mail. She gets stuck in an elevator with three other people. The elevator operator insists that if they all jump at the same time, maybe the doors will open because the elevator will “think that no one is inside.” All four of them jump. This does not work. Feeling particularly desperate, they all go around saying the things they’ll do once they get out of there. The old woman promises she’ll finally make amends with her mother, the elevator operator says he’ll marry his girlfriend (“she deserves it!”), and Patricia, oh ever-practical Patricia, proclaims “If I ever get out of here, I’m getting laser eye surgery!”

I hope you, reader, have not gotten to the Patricia Eden level of quarantine madness yet, but if you have, I’ve probably reached a level even higher than yours. This is a thought I have actually had multiple times this week and am now sharing with you:

If I ever get out of here, the proverbial stuck elevator, then I will be lucky enough to take finals again in person.

I say this with complete sincerity! Before the exam extravaganza begins, I will partake in a reading period that will include study breaks with midnight breakfast and puppies and sushi. I’ll walk into Sterling and check all of the reading rooms on the first floor, find them packed to the brim, walk out the York Street side, get a chai at Donut Crazy because I “deserve” it, and submit myself to the Saybrary instead.

I will find myself materializing in random spaces the night before a paper is due, spaces that will retain a Twilight Zone aura in my mind forever. (I would never be able to relax in Morse common room again because I spent hours cramming a philosophy paper there once. I’m pretty sure the impression of my body is still in the couch).

I will spend way too long on a final assignment for a class I’m taking Credit/D/Fail. I’ll scroll through social media and see some people already on break and wish that I were in their shoes, except they’re not wearing shoes, because they’re on the beach, and it’s break. I will not do my laundry for a whole week so I can shove it all in a suitcase to wash at home instead.

I won’t see some of my friends for five days and then witness them re-introduce themselves to society five days later. They will tell me that they have been spending all of their time in the med school library, which works for them because it is dark and musty, and thus confers the same masochistic comfort of their equally miserable childhood bedroom. Anyway, I digress…the point is, finals season at school has its ups and downs, but it sure beats taking exams and writing term papers at home.

I’m convinced that Yalies do finals season right. Of course it’s stressful! But it’s manageable. You’ll get through it, and the majority of the work, if you’ve been at least somewhat diligent throughout the semester, is done. There are so many silver linings to reading period and final exams as well.

This being the end of the semester and now the end of the academic year, many performance groups will be staging their final productions, student-musicians will be giving recitals, seniors will be taking photos with their theses, and the weather will be putting a skip in your step.

Maybe if we all jump at the same time, the elevator doors will open and we’ll get to take exams and do the not-so-fun parts of school the fun way again.