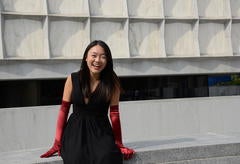 Hi! My name is Joanna Wu, and I’m originally from Wellesley, MA. I’m a Junior completing the Computer Science major. When I’m not coding, you can catch me budgeting finances for or singing with my all-female a cappella group, Something Extra, as our Business Manager. This year I’m partnering with the School of Management to organize a Computer Science Conference at Yale, and putting together a fundraising event with Toad’s Place as the Vice President of Philanthropy of Pi Beta Phi, a Yale sorority. I love to play piano and sing with my friends in one of the many residential college common rooms, and try out new restaurants in the New Haven area.

Grace Hopper and The Future of Women in Tech 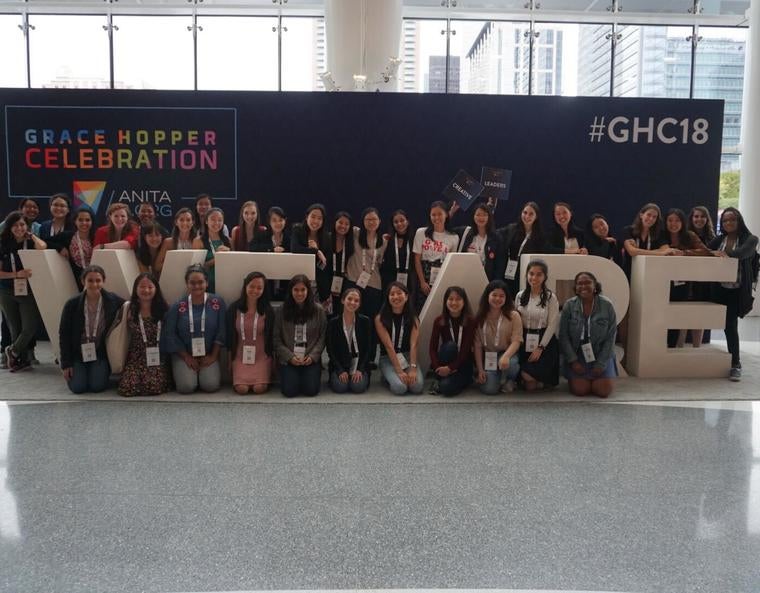 Women now represent 47% of the workforce (as compared to 38% in the 1970s) but only 12% of engineers are female. As a female computer science major, I’ve felt that disparity in classes, in study groups, and when I worked in the tech industry this past summer. When I first heard about The Grace Hopper Celebration of Women in Computing, I was beyond excited. Grace Hopper is the world’s largest computing conference for women, with more than 20,000 attendees each year. Therefore, I was unsurprised to hear that tickets for the conference sold out in a matter of minutes each year. I set myself up with 3 different laptops at work this summer to try to get a ticket. All of this however, would not have been possible without the generous funding of the Yale Computer Science department, which granted me a scholarship to cover the hefty cost of the admission ticket and an extra stipend to cover travel, lodging and food during the 4 day trip.

My travel to the event was certainly not smooth, with a cancelled flight and a 4 hour delay, but once I made it to Houston my experience at the conference made it all worth the travel. The convention center was huge, with dozens of conference rooms, grand ballrooms, and expo halls. One the main floor, there was a large interviewing hall where companies could rent out booths and conduct on-site in person interview with potential candidates. This was a huge part of what made this conference so great- many candidates were able to save themselves a long flight out to the West Coast by attending the conference and interviewing at the same time. 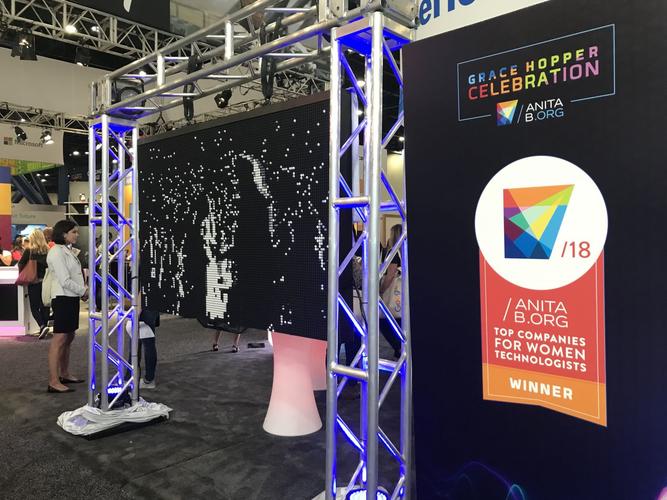 Companies set up extravagant booths in the Expo Hall, with interactive displays like this one!

In the Expo Hall, hundreds of companies set up booths with recruiters, swag, and food. I talked with current employees, learned about job opportunities, and asked about internships – all things that are really difficult to do online. Best of all, I met amazing female software developers, machine learning engineers, data scientists, and technologists. I had never been in a Computer Science related space before where there were more women than men. It was absolutely the best part of the entire conference. 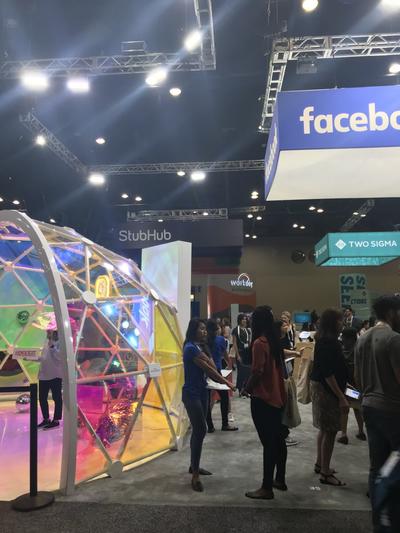 There were tons of recruiters at each company’s booth.

On the same floor, there was a poster presentation area and new technology showcase. The poster presentation was a fantastic place to learn more about the research being done by female computer scientists, and showcased a lot of undergraduate research. The new technology showcase consisted of more booths where companies could show off the new hardware and software they had been working on, before it was released to the general public. It was awesome to see so many female technologists presenting and talking about the work that they had done. 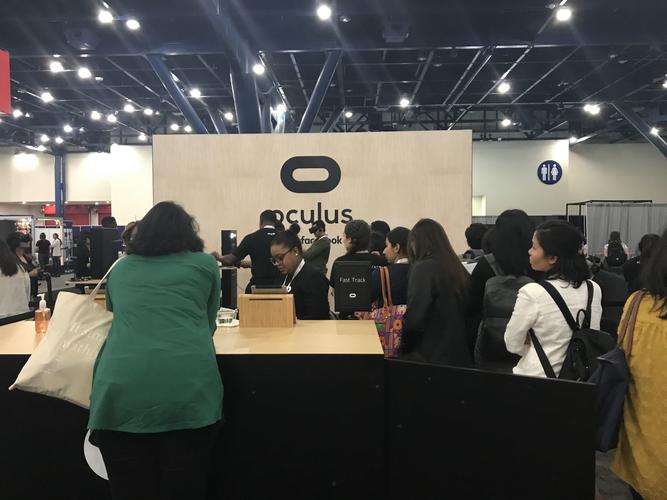 At the new technology showcase you could try new products before they were released to the public.

My experience at Grace Hopper completely changed how I see my career, my major, and my existence as a woman in Computer Science. Hearing female CEOs, CTOs, VP’s and founders of companies talk about their journeys on multiple panels, meeting talented female technologists and getting to know my peers better through this conference was one of the most empowering and inspiring experiences I’ve ever had. Instead of seeing myself as a minority, or as someone who exists in the tech world but doesn’t truly belong, I now see myself and other female computer scientists as the future of tech- members of the tech world that are going to innovate, create, and drive change and growth in ways the world has never seen before.