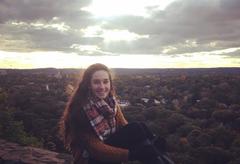 Hi! I’m Hallie. I am a freshman in Ezra Stiles College originally from a suburb just outside of the Windy City. I am a prospective MCDB (Molecular, Cellular, and Developmental Biology) major — whew, that’s a mouthful! — and I am interested in studying clinical medicine as well as doing medical research in the future. Neuroscience and astrobiology are two of my favorite topics to explore. On campus, I am involved in the Yale Medical Professions Outreach Physician Shadowing Program and the Berkeley College Orchestra, in which I play viola. Aside from these scheduled activities, I enjoy attending a variety of interesting seminars, plays, and performances.

On the Origin of Extracurriculars 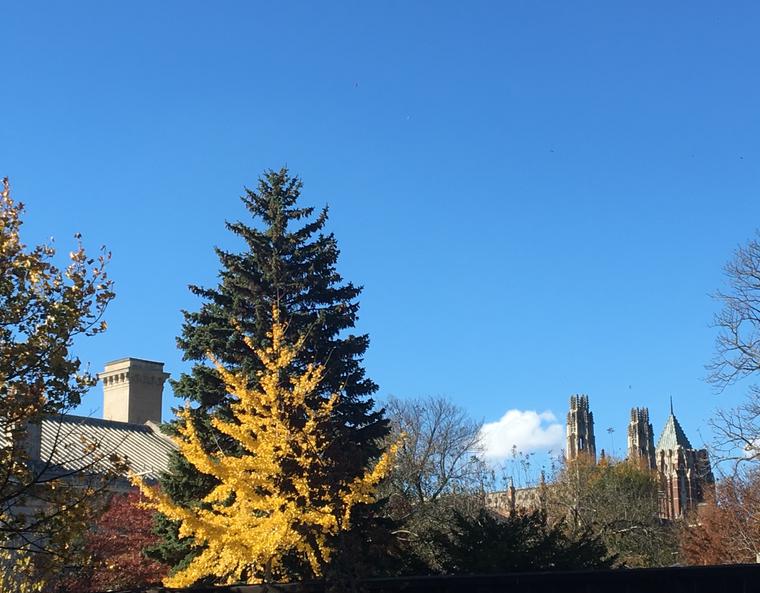 Yale’s extracurricular scene is kind of like the universal tree of life. What? Well, I apologize up front for using a metaphor for a metaphor. This revelation may or may not have sprung entirely from spending too much time studying for one of the amazing courses I am currently taking (“Ecology and Evolutionary Biology” with Professor Thomas Near), but please hear me out.

A fine specimen on the New Haven Green.

The tree of life, for those of you who don’t know, is a way to organize biological species based on their relationships to each other. Zoom out far enough, and you can see the three huge branches of life: Bacteria, Archea, and Eukaryotes (that’s us lucky ducks!…well, us and the lucky ducks…). Zoom in close enough, and you can see the different twigs representing eastern gray squirrels and western gray squirrels (which look almost exactly the same, as one might expect).

While, I admit, Yale’s number of student organizations might pale in comparison to the eight million, seven hundred thousand unique species currently calling Earth “home” (as estimated by the United Nations Environment Programme in 2015), it’s still holding steady at a respectable 500+ registered student groups. Yale’s array of student organizations can be categorized in myriad ways (feel free to go to http://admissions.yale.edu/extracurriculars to see for yourself), but I would argue that, in keeping with the tree of life, relationships are a big part of how groups are formed. A “clade” of instrumental groups might have been expanded when, for example, a friendly section of cellists playing in the Yale Symphony Orchestra (YSO) with a common taste for rock and pop music decided to start their own group, Low Strung, or when some other YSO members, sharing a common interest in conducting and exploring romantic orchestral repertoire, founded the Berkeley College Orchestra to do just that. The same goes for the multitude of a cappella groups, improv troupes, and dramatic productions: this diversity was formed because of student relationships and never ceases to be characterized by those relationships. An idea tossed around by co-directors during rehearsal can be the genesis of a new play, and a discussion between members of the Yale Student Investment Group could be the origin of a startup company.

Some of the most interesting facets of the tree of life are instances of convergent evolution: that is, when two or more species appear to be similar but actually have very different ancestral patterns. Think, flying bats vs. flying insects, each of which evolved the ability to fly but are not very closely related in the grand dendritic scheme. I’d argue that this sort of thing also often happens with Yale student organizations. Many different groups of Yalies might identify the same problem, say, improving the lives of people suffering from chronic illnesses, and each go about solving or alleviating that problem in different ways. A group such as the Yale Undergraduates at Connecticut Hospice, which is mostly (but not solely) comprised of pre-medical students, allows its members to use their skills in communicating with patients, as well as their knowledge of the biological bases of disease, to assist with patient treatments and wellbeing. Another organization, the Haven Free Clinic, allows students with knowledge of foreign languages to use those skills for conversing with patients who cannot speak English, many of whom are regulars at the clinic due to chronic conditions such as AIDS, in their native language. A multitude of performance groups utilize music, dance, and drama to entertain and inspire patients, such as by forming string quartets to play at the Yale New Haven Hospital. Organizations with a focus on investing, finance, and social policy use their problem-solving skills to brainstorm ways to change the healthcare system to benefit these groups of people (and many others) at the annual “Yale HealthCare Hackathon.” Student journalists and editors write columns about healthcare inequities and other areas for policy improvement. Spoken word poets share their stories of family members with chronic illnesses and the things these experiences have taught them about life and love and family.

This is just one example of “convergence” in student endeavors; this pattern occurs over and over again and each new class of Yalies brings countless new ideas and interests, further expanding the artistic, academic, and social reach of the university community. Each student, from a first semester freshman to a second semester senior, has the ability to harness Yale’s resources to found almost any group one can imagine with great ease. The Yale College Council, Yale’s student-run government, oversees the allocation of vast amounts of grant money, transportation, publicity materials, venues, and advising. Additionally, the Dwight Hall Center for Public Service and Social Justice serves as a hub for all volunteering organizations on campus and offers its member groups another level of funding, resources, and advising.

The amount of learning that occurs in these organizations is tremendous, and the benefits membership in these groups provides extends beyond even teamwork and leadership experience. All life forms on Earth share certain characteristics, and all student groups at Yale do, as well. While my observations may not meet the rigorous guidelines set forth by a scientific journal, I can say that all the experiences I have had with student groups involve caring, intelligent, and passionate students who are here because they earnestly want to better themselves as individuals and help their communities. So, when I hear about the new New Haven small business my roommate is helping with Yale Elmseed, or when I visit an elderly woman suffering from Alzheimer’s Disease with Yale Alzheimer’s Buddies, the organization I helped found this year, I am incredibly grateful to be at an institution where these experiences and efforts matter just as much as the classes we take each semester. The groups in which I invest my time represent who I am and who I want to be, and I know most Yalies feel the same. Whatever level of experience or ability you may possess, this tree is intricate enough to find a place to invest your time and passion. Just as every species on the Earth finds a place in the tree of life, every student at Yale finds a perch in its ever-growing tree.