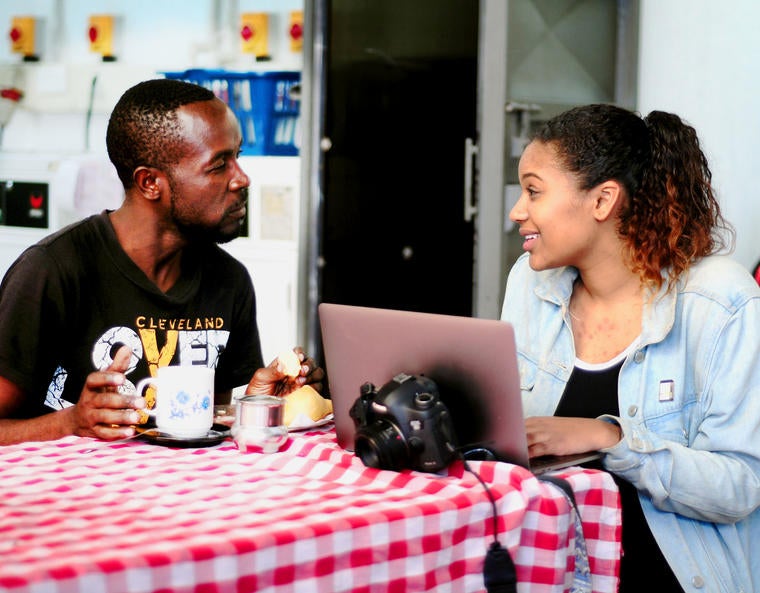 Spring break at Yale is an interesting time. With almost three weeks off, lots of extracurricular groups take trips, many people go on vacation, and others go home or stay on campus. There is no shortage of interesting plans that Yale students come up with for those short weeks in March.

This year, I spent my first week of spring break with my a cappella group, traveling to Buffalo, NY and Toronto, Canada. I left the trip a few days early to head to Kenya to visit the Kibera Town Centre (KTC), an organization set up by the Human Needs Project. I had visited once before, and interned for the non-profit in California last summer, but this was my first solo trip to Kenya. 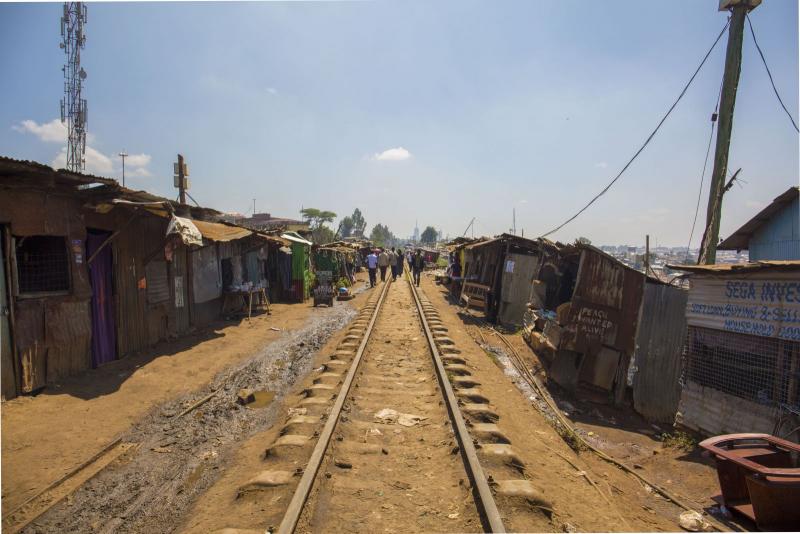 Kibera is spread across 2.5 square kilometers that spans this railroad. Trains pass through regularly - when you’re walking you have to be careful to hop off of the tracks to avoid it.

Kibera is its own subset of Nairobi, Kenya’s capital. Kibera is known as the world’s largest urban slum, and it houses somewhere between 250,000 and 2 million people on approximately 2.5 square kilometers. There are no really solid numbers on the population size - the census says ~200,000, but everyone I spoke to estimated 500,000 or higher. The non-profit works to provide services to as many people as possible, offering services from the basics, such as water, toilets, and showers, to empowerment services, such as WiFi, computer classes, and investment options, such as SACCOs.

I wasn’t totally sure what to expect on my first solo trip to Kibera. Because my father also works with the non-profit, I had only ever been with him - but there was nothing to fear. I arrived at Nairobi airport, bought my visa to enter, and a member of the KTC staff named Dennis picked me up. The next day, Dennis came to get me from my hotel, and it was off to the town centre we went! 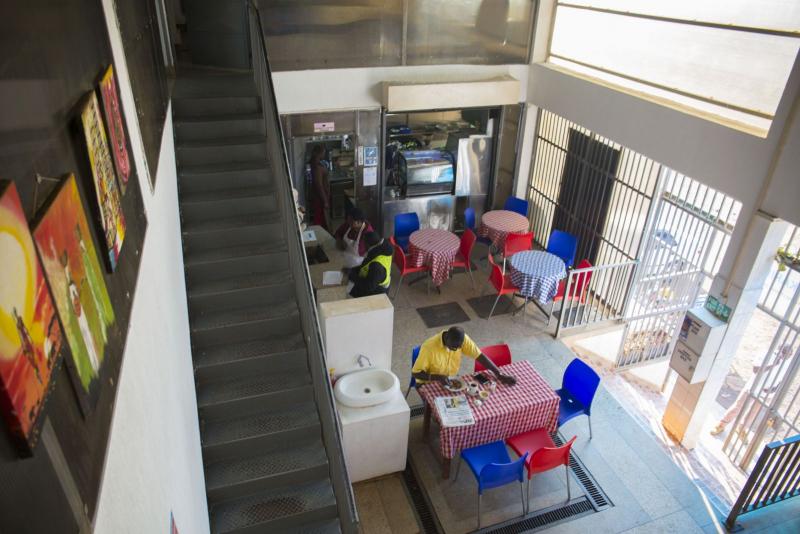 This is the centre: downstairs has a delicious cafe, a shop, laundry rooms, and a checkout counter. Upstairs has a cyber cafe, classrooms, and other rooms! Check out the art on the walls!

I had a few projects to complete, but a lot of my time was my own. One of my goals was to finalize the project I want to present as my thesis research, and so I spent a lot of time conducting informal interviews and having discussions in the five government-run schools that serve the Kibera population. The KTC provides water to two separate schools, and I spent a fair amount of time photographing their students as well as talking to the teachers about if our services were helping their students. 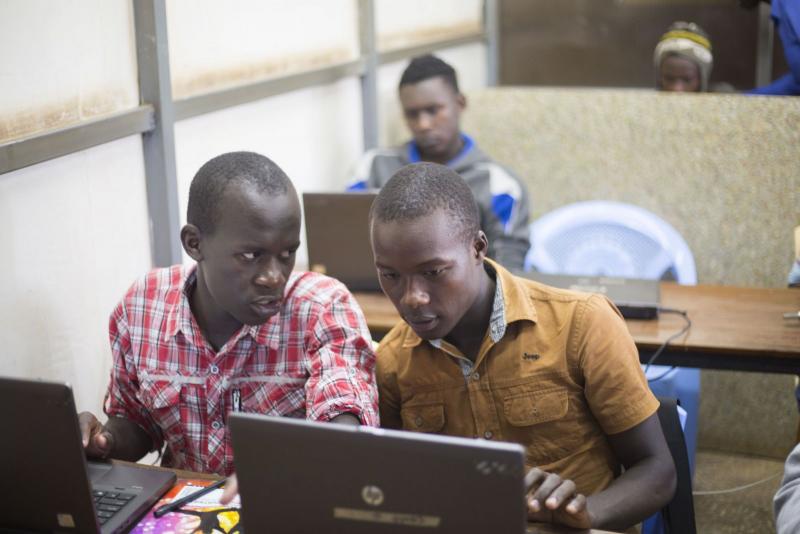 Here are students in one of the computer classes at the KTC.

I also had a lot of photography assignments for the project. I’m very conscious of photographing in Kibera for a few reasons. The first being that Kibera is a functioning place, and it is home to all the people who live there. Unfortunately, Kibera, and many other places like it, have become tourist attractions. “Slum tours” are offered, and the area is even rated as a stop on Trip Advisor. It’s not uncommon for people to walk in and shove their cameras in people’s faces; therefore many people who live there are very wary of getting their photo taken.

As a foreigner my goal is to be as respectful as possible, and to document the area as more than just a tourist attraction. I want to document the people who live there as whole beings. One way I did this was by documenting some stories from clients of the KTC - people who offered to be photographed who use the services regularly - but the most fun subjects were the kids in the area.

I also found myself approaching groups of children to ask for a picture. As a non-Kenyan, it is very obvious that I am not from Kibera. As I stood outside there were often stares, and children would ask “how are you?” or come up for fist bumps. Most commonly they simply remark either to me or their friends that I am “mzungu” – someone not from the area. However, once the camera comes out, a lot of their hesitation goes away. The kids will pose and smile and then crowd around the camera and ask to flip through the photos and laugh at their faces. Peace signs are often raised, and fingers shoved in front of the camera lens, eliciting rounds of laughter. 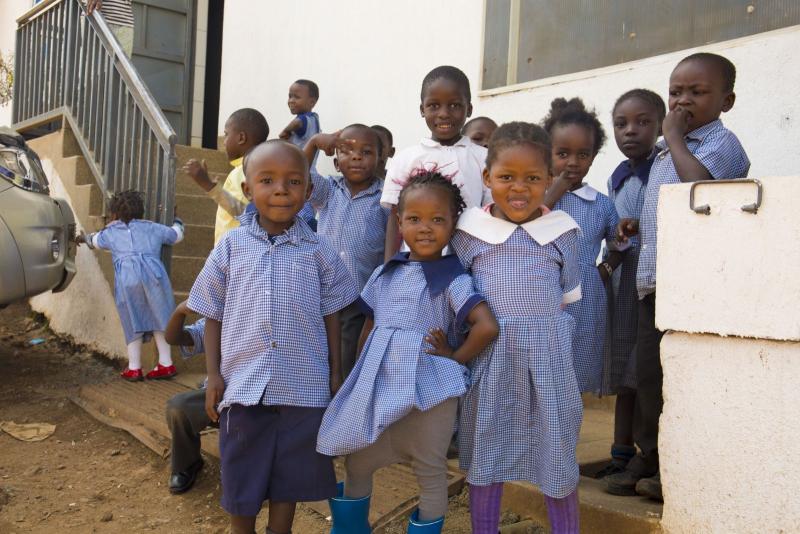 Here are some awesome kids posing in front of the bathrooms and showers at the centre. This is before they all crowded to see how their poses looked on camera.

Of course, being in Kibera is not all fun and games. Discussions about the lack of resources, government corruption, police brutality, poor sexual health, and poor living conditions are not easy to have. People continually asked if I felt safe, and I was discouraged from walking around by myself. On my third day, a man tried to commit suicide in front of the centre, and another volunteer and I who are both EMT-certified spent a majority of our afternoon attempting to treat him and take him to a clinic.

Despite all of the bad, there is an incredible feeling that comes from being in Kibera. It is always loud in the best way – music playing from different speakers and people attempting to preach. When the children get out of school around 3pm the noise is amplified; I quickly identified some classic Kenyan songs that I would hear every day. I spent one afternoon in a truck bed attempting to promote “Kibera’s Got Talent,” a giant talent search held by the town centre. We drove through Kibera’s thirteen villages with speakers tied to the back of the truck, playing music and yelling into microphones in an attempt to get people to come to the KTC and audition. I got the opportunity to watch the first day of the talent search, watching amazing rappers, acrobats, dancers, and musicians of all ages from Kibera. Many people who live in Kibera mentioned the incredible sense of community, demonstrated by the fact that every time I walked around with someone from the area, tons of people paused to say hello and have small conversations. 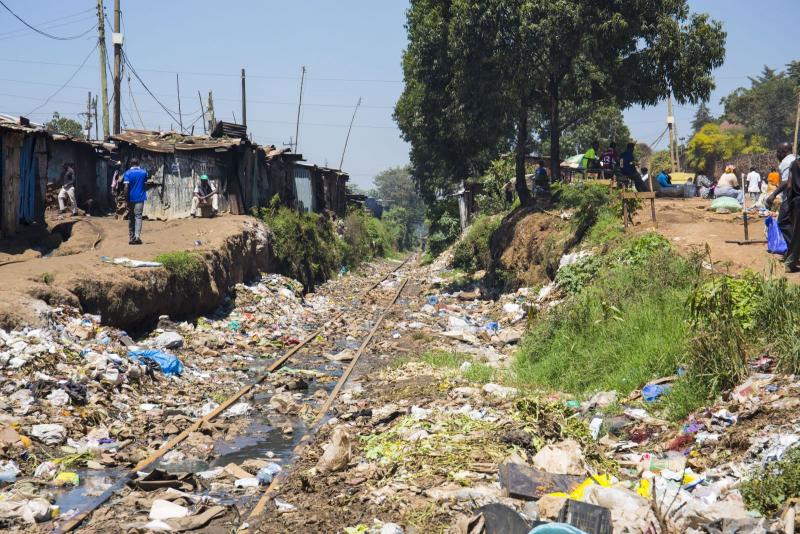 This is all of the trash on the railroad. As an American I am always shocked by how this looks, but it’s a matter of life in Kibera. Despite this, people constantly cross here, and there’s always things going on right outside. The centre is about 50 feet away from where I took this photograph.

Getting to spend this short amount of time in Kenya has been absolutely wonderful. From the USA, it is often hard to view the small interventions as life-changing for those who live in Kibera. But speaking to people whose lives have been positively changed by the centre is so completely amazing, and I am so proud to work with an organization that attempts to empower the people who live in Kibera. I’m so excited to get to go back to help out with the KTC, as well as to write my thesis on the area.

An amazing aspect of being a Yale student are the international opportunities. I have traveled abroad with my a cappella group, and now with the support of Yale academics. My peers have spent summers studying abroad, heading to amazing places during breaks with their classes, and traveling with tons of extracurricular groups. While I wasn’t actively looking for international experiences when I chose Yale, it is something I have been so grateful to have while at this school.