Did I mention that Hockey’s #1?

The Yale Men’s Hockey team is off to another incredible season.  For the first time in the program’s 116 year history, they’re indisputably ranked #1 for the nation.  Wow.

I have the chance to follow them every step of the way as the Yale Precision Marching Band plays at their games throughout the winter and spring. Though as a marching band our primary focus is on football season in the fall, we keep playing Pep Band style at sporting events throughout the spring, with Hockey as one of the favorites.

How do you even describe it?  Yale Hockey is poetry. Brutal, violent poetry that slams people into glass walls. 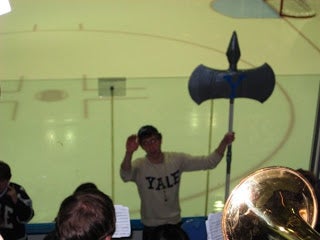 So clearly, the only appropriate way to conduct a band at such an event is with an enormous battle axe.

But the whole experience of a home game with the hockey team and YPMB becomes so much more than that. We pump up the crowds to a fever pitch with our music, anything from Lady Gaga’s Bad Romance to an amplified electric guitar solo backed up by an enormous brass band in our version of Smells Like Teen Spirit. Between songs, we keep the crowd going by leading enormous cheers (“You have knives on your feet… USE THEM!!”) Words can’t convey the level of adrenaline at these events. 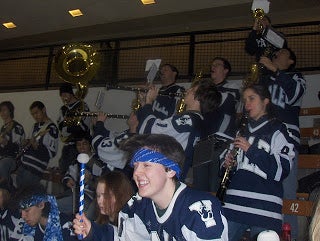 The band plays at all the home games and got funded by the Athletics Department to travel with the team to Worcester, Mass, to cheer on the team as they attempted to make history in the NCAA Playoffs last spring. The team spent most of the season ranked around #5 nationally, and came out on top of the East Coast Athletic Conference Hockey League, scoring them a spot in the NCAA Playoffs.

Last year, we were a single game off from making the Frozen Four, but even going that far was an incredible experience. Sports aside for one moment, there’s nothing quite like conducting your band in an arena nearly filling its 15,000 seat capacity, broadcast live over ESPN. My phone wouldn’t stop buzzing with texts from friends on campus, relatives, people from home, gushing about how loud and powerful the band sounded on national TV.

I’m excited for this year to be even better.  We still have an incredible offensive line, and we’ve come a long way to shore up some of the weaknesses that hurt us last year in defense and goal.  Our current goalie, senior Ryan Rondeau, has carved out a phenomenal record this year.  This is the sport that’s consistently selling out the 3,500+ seat capacity of The Whale (the arena more properly referred to as Ingalls Rink), with an enormous outpouring of support from the students and broader community there to cheer on the team.

I’m keeping my fingers crossed that come April, I’ll be hopping on a jet to fly to Frozen Four finals in Saint Paul, MN, yelling myself hoarse and blasting out the fight song for the boys.