It’s 11:54 pm on Halloween night and thousands of costumed Yalies are packed into all three levels of Woolsey Hall. The opening musical acts have wrapped up their sets, final stage adjustments are being made, and the energy radiating throughout Yale’s largest seated auditorium can only be described as electric. The screams and cheers of the crowd intensify as the clock inches ever-closer to 11:59 pm, the famed starting time for one of Yale’s most anticipated annual events – a performance by the Yale Symphony Orchestra (YSO).

“Orchestra concert!?” you might be thinking. The YSO Halloween Show is definitely not your standard Halloween party, but it’s one of the many reasons why Halloween at Yale is so unique.

Yalies are typically known to be a creative bunch, but we take creativity to an entirely new level when tasked with celebrating Halloween. Whether it’s themed desserts in the dining halls, attending a Shades performance at the President’s House Halloween party, or discussing the week’s reading in seminar with the likes of Batman, Sandy from “Grease,” and a ceiling fan (don’t ask), All Hallows’ Eve is nothing short of epic here on campus.

Halloween starts with the costumes. There’s absolutely no shame in wearing your costume all day – even to class. Hey, your professor might dress up as well! Whether your costume is witty, ridiculously realistic, or just plain bizarre, it has a home here on campus. Among my favorites this past year were:

What did I dress up as? Take a look for yourself: 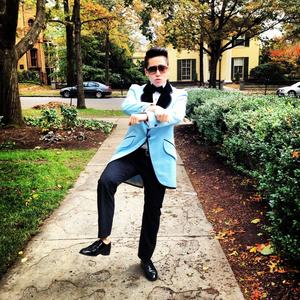 As a proud Korean-American, I had no choice but to kick it Gangnam Style and pay homage to the man, the legend: PSY. Alas, there were many other PSYs roaming around campus as well, but I like to think that my friends in Timothy Dwight and I were the best of the bunch: 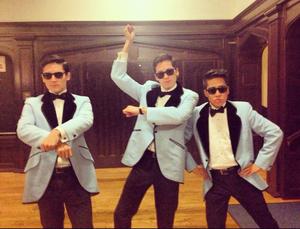 When Halloween night rolls around, groups of friends gather together in anticipation of the YSO Halloween Show. As one of Yale’s most celebrated campus traditions, the YSO Halloween Show is the second most-attended Yale event –  the first being the annual Harvard-Yale football game. Tickets for the show sell out just a few days after they go on sale, which is pretty amazing considering Woolsey Hall has over 2,700 seats. The show itself is a silent movie filmed in the months prior to Halloween, while the orchestra accompanies the film with a live soundtrack.

The movie is new every year but always draws roars of laughter and cheers. There are frequently appearances by our beloved administrators, the occasional celebrity cameo (Woody Allen, anyone?), and orchestral renditions of songs both old and new.

This year’s Halloween show was simply spectacular. The Lost inspired storyline unfolded alongside music by Schubert, John Williams, and yes, Lady Gaga. I’ve had the chance to perform in the YSO as well as see the show as an audience member, and I know from experience that as long as you’re in Woolsey Hall on Halloween night, you feel the amazing ambiance of it all.

YSO Halloween Show and costumes aside, I realized this year just why I love Halloween at Yale so much. I always like to say that people here at Yale have their priorities set the way I want to set mine, and that becomes so evident in the spirit of Halloween. My peers are extremely hard-working, driven, and intelligent, yet also understand that college is a chance to let your hair down, have lots of fun, and enjoy every moment and experience you have with some wonderful classmates. Everyone on campus follows their academic and extracurricular passions, but they’re also completely willing to let loose and show off their inner quirkiness. After all, there’s something pretty awesome about seeing that girl from your seminar give a presentation dressed as a hipster Disney princess!