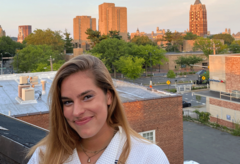 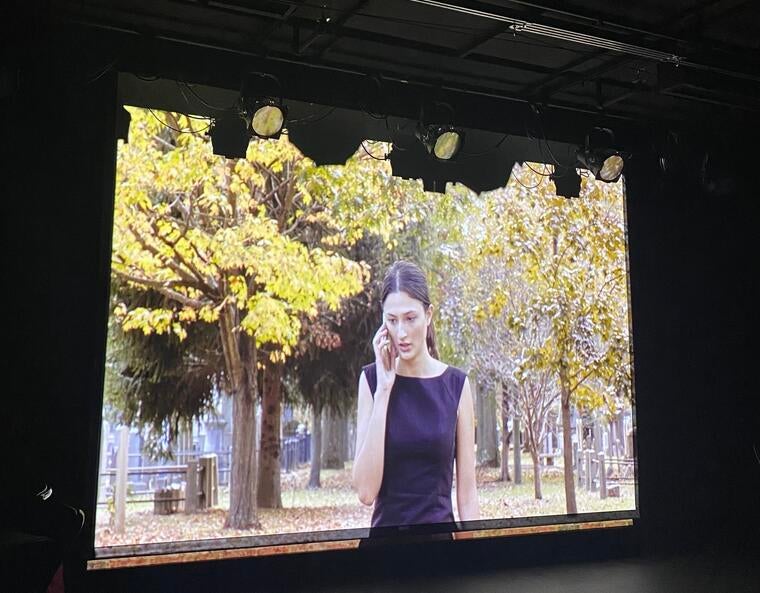 When I wrote my “Senior Thesis Film: Director’s POV” blog post, we had just wrapped our four-day Fall Break shoot. To me, this had been the “fun part”, and it was now time for the part of post-production that I was not-so-secretly dreading… dun, dun, dun…the editing. The thought of editing my Senior Thesis, the culmination of my Yale education, intimated me! After we wrapped, I gave myself a week or so away from the project to decompress and focus on other schoolwork. Once I began going through the footage; there was SO much of it. I don’t know why this surprised me, because I of course was on set and knew how many takes of each scene and camera angle we filmed.

The thing about editing is, it’s incredibly tedious. For some people, this might be enjoyable. I imagine it’s a lot like coding (though I know very little about Computer Science) because it is a lot of trial and error, and a lot figuring out little pieces and finding ways they best fit together to create the big picture. Once I had a rough cut of my film, I found a First-year, Molly, an editor-extraordinaire, who not only fixed my editing hiccups, but did the color-grading and sound design – basically what turns the raw footage into something that looks like an actual movie. Saying Molly simply “did” this is an understatement, she’s a real wizard when it comes to special effects and movie magic. Another Yalie, Caroline, composed a beautiful and emotional original score for the film. Remember the name Caroline Ho, she’s going to be up there with the likes of famous film composers such as Hans Zimmer and Danny Elfman.

It was time for the big film premiere. As a dramatic person, I enjoy hosting events and making a big fuss. Covid, however, doesn’t allow for huge events. We had to keep it pretty small and of course, masked. I picked a date, December 17th (my self-imposed deadline to turn in my Thesis), ordered a huge cake from Claire’s Corner Copia, and invited my closest friends, plus all the cast and crew. 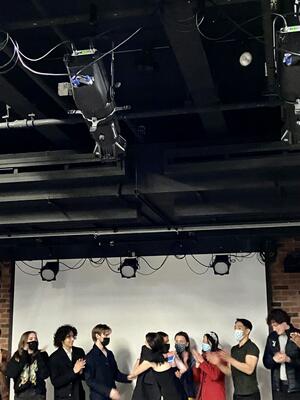 The Premiere was exhilarating. After sorting out some technological problems that just had to happen (thank you, my tech-savvy friends!), the room went dark, and the film began playing on the big screen in the Hopper Cabaret. I got to experience a room full of people watching my work for the first time ever.

As the credits rolled, I brought the entire cast and crew up next to me to stand in front of the audience. We were met with applause and love. I thanked everyone for coming, for supporting me, and the cast and crew for their dedication. Julia, my producer, gave me flowers. I felt sort of famous - I’ve joked that this was my 13 minutes and 42 seconds of fame, because that is the length of JUNE - and it was gratifying, exciting, and special. I started tearing up, but I don’t think anyone really noticed because I was wearing my mask. 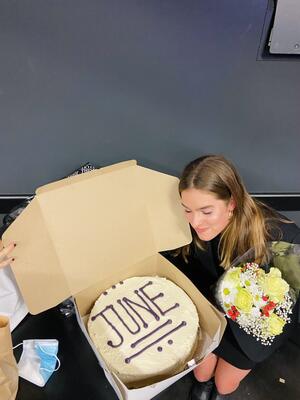 One of my goals for 2021 was to be really proud of my Thesis. Check! I am really proud of myself and everyone who helped make this happen. It was a test of resilience – that was solved through gratitude and encouragement and having fun.

And with that, that’s a wrap! 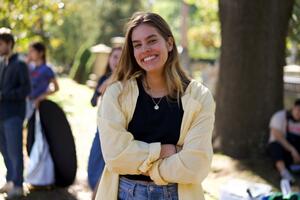 A picture from set. Do I look legit?