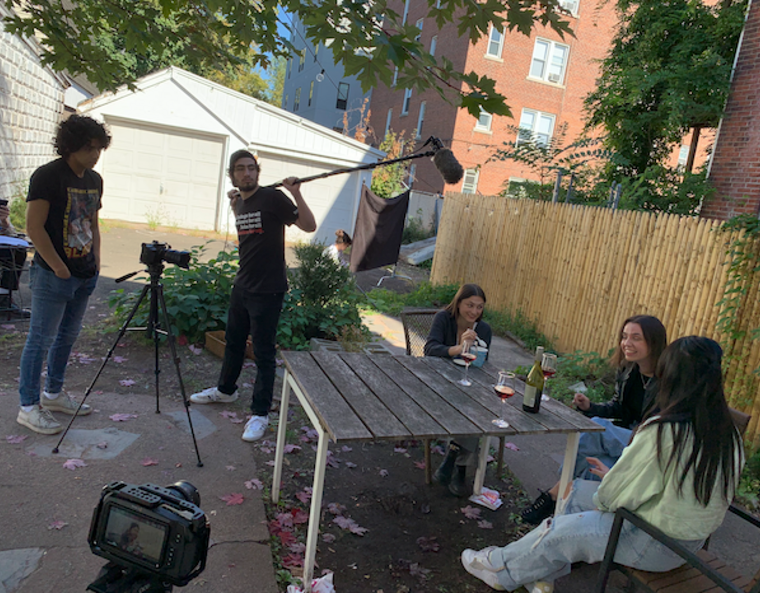 Guys! I made my acting film debut during fall break!

Who could’ve predicted that I’d finish my own senior thesis for the Theater major and then leap into someone else’s thesis right after? I had the great pleasure of acting and production assisting (PA’ing) for Charlotte’s senior thesis film for the Film & Media Studies major. Charlotte just so happens to also write for the admissions blog. Check out her post here, which contains the answers to the questions I had for her about this experience! 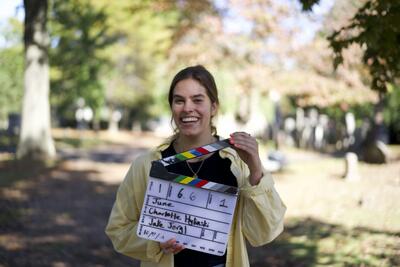 Charlotte, director and writer, is amazing!

1. What is this film about? What was your inspiration?

2. How did this experience differ from other sets you’ve worked on?

3. What were you most nervous about going into this project as a first-time director?

4. Is there anything you wish you did differently on set or throughout pre-production?

5. What did you learn about yourself as a director through this process?

7. What did it feel like to watch a cast and crew bring your words and vision to life?

8. What were some of the challenges you faced in pre-production and on set, and how did you overcome them?

9. Is Cassandra a good actress? (her ego can’t take it if you say she’s not, so choose your words wisely)

10. Future projects/dreams/career goals? What’s next? (We both graduate in Dec… see you out in LA???)

And here are my answers to her questions, which you can find in her blog post! 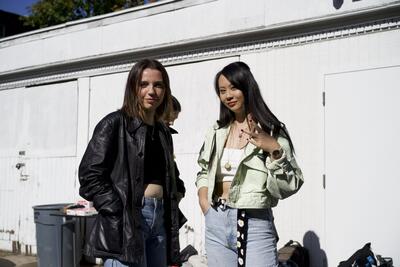 My co-star and I on set!

1.I love the experience of stepping into another character’s shoes. I get a break from being Cassandra as so many people in her life know her, and get to be a Cassandra that few people know. I think it’s a natural extension of my passion for writing; even as I write, I tend to murmur each line of dialogue under my breath, saying my characters’ lines, feeling the emotions they’re experiencing. I also love bringing a fictional character to life.

2. This is my on-screen debut! I love that I got to play Gigi, a character who is stylish and the life of the party. 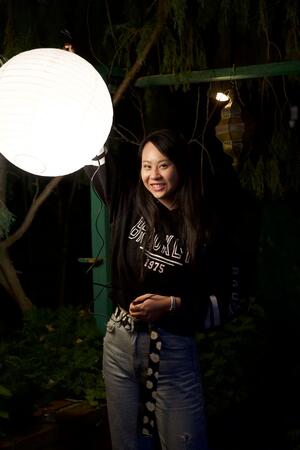 Working as a PA & learning what it means to be a lighting gaffer!

3. I think the two are very different worlds. I think I love both, equally. In theater, you have to be “on” for a much longer period of time; the audience is watching you the entire time you are on stage. If you make a mistake, you just have to go with the flow. The show must go on. Alternatively, in film, you’re acting in much shorter chunks of time; however, because so much goes into the setting up of a shot, you have to be ready to be “on” at a moment’s notice. I realized this especially when we filmed in the graveyard; with the sun, the tree shadows, and the clouds constantly shifting, the set was constantly changing, whether it was the camera position or position of a light diffuser. There’s thus a lot of pressure to get all your lines right for that shot, otherwise all that time in setting up that shot might go down the drain if the lighting conditions have changed once more. 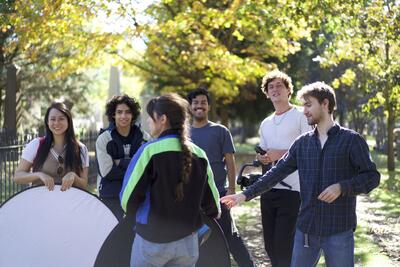 Shooting in the graveyard. 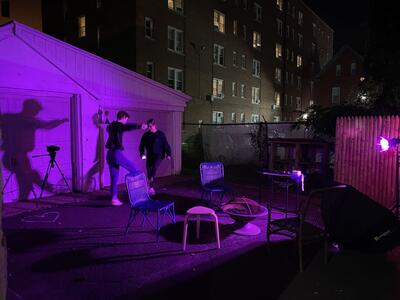 Our DP and Charlotte dancing on set.

4. So many things! I loved the energy of this particular group of people. This was my first time meeting a lot of people from the film community here at Yale, and wow, everyone’s so rad. I admired their knowledge of their craft and their desire for excellence in every shot. I loved all the time we spent in the graveyard, Grove Street Cemetery, which I pass every day to class. Now I can check it off my bucket list. I loved shooting the dance party sequences–we filmed in a backyard with purple/pink lights. My character had to “start” the dance party; I’ve always wanted to be that girl who can effortlessly and gracefully dance on the dance floor like no one is watching (see: Angelina Jolie dancing in Mr. & Mrs. Smith). The reality of filming this was very different because I had to dance in some takes without music, which was extremely awkward but ultimately provided a lot of laughs. I learned that Timothée Chalamet had to do that on the set of Call Me By Your Name, so I’m basically Timothée now. Shoutout to Dunkin’ Donuts’ donuts and Donut Crazy’s chai latte for sustaining me through the three long days of shooting. 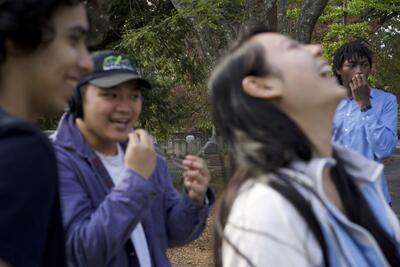 We clearly had a good time on set.

6. I loved learning how to PA: yelling “striking” when turning on lights, holding up a mic boom and angling it just out of frame, setting up flags to block sunlight, acting as a sit-in for other actors during a shot set-up. My respect for filmmakers, especially below-the-line crew, has shot up exponentially after this experience. So much hard work goes into what is captured on camera! 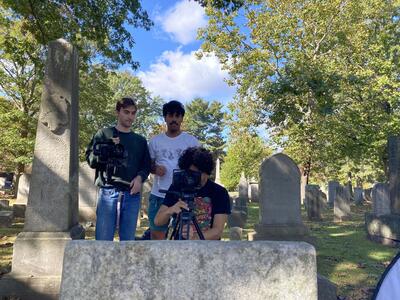 7. Charlotte is an excellent director. I was shocked to learn that this was her first time directing; I would imagine a first-time director as way more stressed out and frantic. Charlotte had a chill energy to her and never made me feel stressed as an actor or PA; I could also see that she knew when to make the executive decision in order to keep us on schedule. She knew when to compromise and when not to compromise. Her excellent leadership was also reflected in the group of people she pulled together from our camera operators to sound to lighting. I also know that she had to change things in her script last minute due to COVID restrictions, so I admire that flexibility and fast turnaround. It was an honor to make my acting debut in her directorial debut! 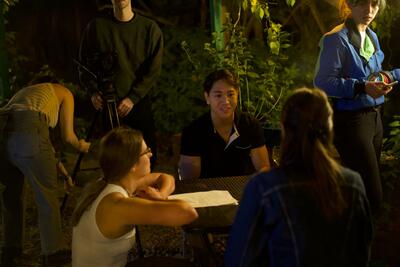 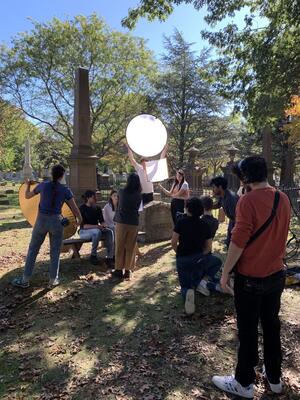 Hopefully… TV writer’s assistant in a room out in Los Angeles, my hometown! Eventually work my way up to TV writer and perhaps one day a showrunner. Would love to continue acting should the opportunity arise. Currently working on a half-hour comedy pilot about an unconventional superhero as well as a rom-com feature film script.