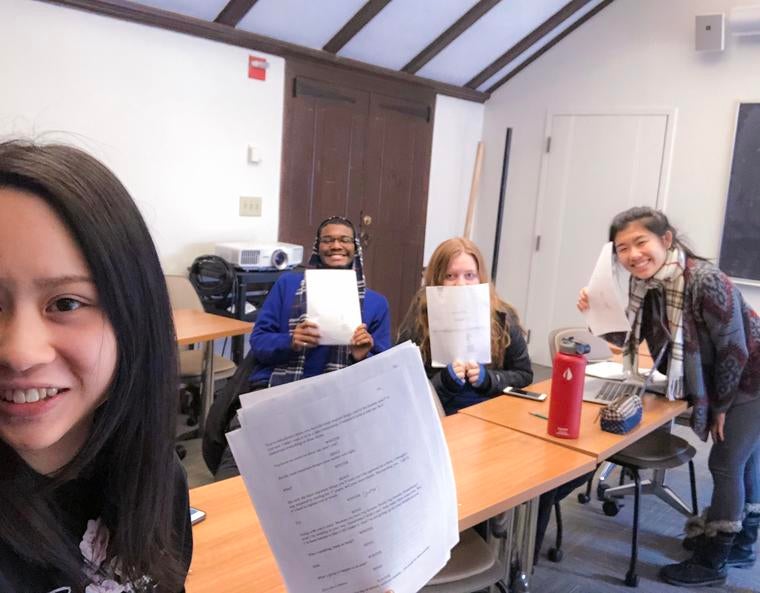 Me and my co-star, stage manager, & director for “Winter’s Tale,” one of the three one-acts.

I have said it many times before, and I’ll say it again: there is MAGIC in seeing your words leap to life. It’s inexplicably wondrous to see something you create in the depths of your imagination crawl out of the darkness and into the light–in this case, the stage’s spotlight. Snappy dialogue, lush settings, lovable characters–all of this materializes through the work of talented directors, producers, cast and crew. In the past, I’ve had the honor of witnessing non-profit theater production organizations produce my one-acts across the country. But this semester at Yale, I won’t need a professional production company to bring my work to life.

All it takes to create theater at Yale is a little faith, trust, and pixie dust–and by pixie dust I mean a team of passionate students. To make art on campus, you do not have to be a Theater Studies Major or part of any particular student organization. Anyone can put up a production. Upon entering Yale, I took this to heart–I didn’t need years of experience or training to pursue my passion. So, last semester, I embarked on a journey to bring my dream to fruition: I wanted to put up a festival featuring three original one-acts in a production called Sonder.

It started with sending mass emails into the void, hoping for a response. I stalked Yale College Arts looking for students who previously worked on productions in stage managing, set design, lighting design, sound engineering, etc. I reached out to fellow artists and friends asking them if they would do me the honor of directing my one-acts. I sent messages to students of all backgrounds and artistic experience, emphasizing my goals for this production: to create a diverse production both in terms of race as well as experience. I also wanted to be transparent about the “behind-the-scenes” action–should an actor want to learn lighting design, I would gladly facilitate the learning process.

After a semester of team-building through countless meetings and emails, I finally had myself a crew–and a group of new and old friends. Their prior theater experience ranged from working in professional companies to absolutely nothing. One of my directors has never directed before–but her passion for the project and her personal connection to one particular character as an Asian American woman made her the right person for the job. Newcomers to lighting and sound design signed up, eager to learn from the experienced student mentors from the Undergraduate Production, a Yale support system for theatrical productions.

Now it was time to cast. Because there are so many shows year round, the Yale Drama Coalition (a student-run organization) holds four casting cycles–two in the fall and two in the spring. All the productions for a particular cycle will hold their auditions within the same weeks–actors can go out and audition to as many productions as they want. On Casting Day, the producers gather to negotiate actors and their schedules. Veni, vidi, vici: we had our cast.

The last step of this pre-production process was to apply for the Creative and Performing Arts Awards (CPA), which would determine our production budget and location (Yalies have access to more than 20 different performance spaces, including many housed within residential colleges). Students can also use CPA funds for dance shows, films, concerts, visual art projects, spoken word nights, and even literary publications. I wrote up my vision in a proposal and outlined my proposed budget to the CPA. Just last week, we got the news: with a $1,500 award, we’re officially scheduled for March 28-30 in the Cabaret in Grace Hopper College. Sonder is becoming real.

As rehearsals gear up, I am sure we will face exhausting late nights and scheduling nightmares and logistical challenges. But I also want to pause in the middle of the flurry and say that I am proud of the progress we have made so far. Our cast and crew feature over 70% students of color. Many of them have never done theater before. Our upcoming months speak of frustrating stumbles, but also new friendships and creative art. There is beauty in the possibility of our failure, and there is beauty in us trying anyway. 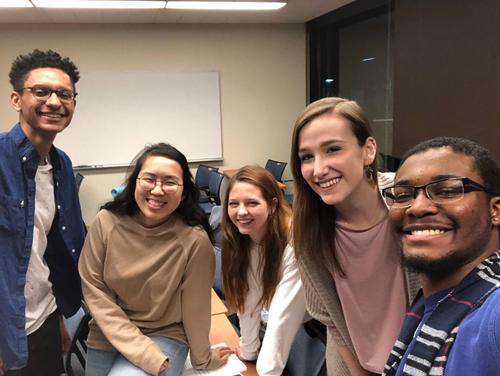 Cast and crew of “Supermarket of Lost,” one of the three one-acts. 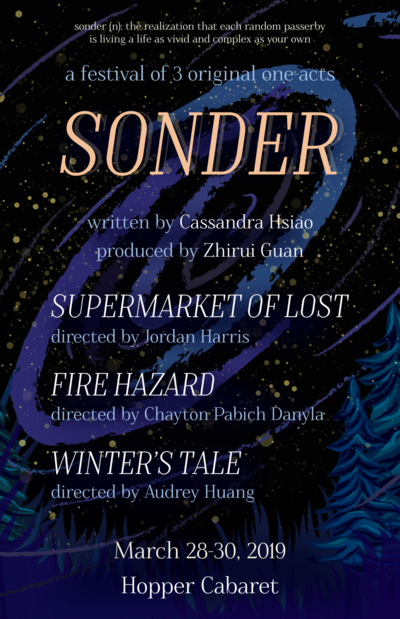 Stay tuned for more updates on bringing Sonder to life.