Shop Til You Drop 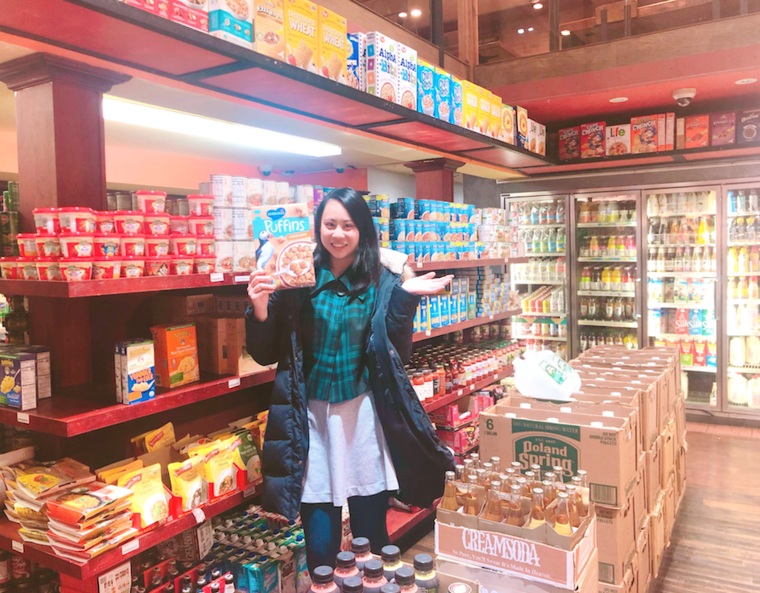 Cassandra with cereal at Good Nature Market, a tiny grocery store on campus.

One of the culture shocks foreigners encounter in the US is the cereal aisle. The sheer number and variety of cereal that line shelves from end to end, each box designed to scream for your attention, colors popping, cartoon characters dancing across the cover. Unfortunately, for a first-time cereal shopper, there’s no way to know which cereal brands they’ll end up liking–their decision to grab a certain box is most likely informed by word-of-mouth reviews, attraction to the grinning tiger on the front, or the promise of a toy buried in the cereal. In a perfect world, the shopper would be able to pop open boxes down the aisle, reach in, and try a fistful of every single cereal before buying. Alas… that’s not possible. Also, gross.

But sampling is possible in the Yale experience of “shopping.” For two weeks at the top of every semester, Yalies are conducting taste tests of their own as they hop from class to class, squeezing their way into a seminar, standing at the back of a lecture hall. We enthusiastically “Bluebook,” or comb through Yale’s 2000+ courses online, an activity that merits its own “Bluebooking Parties” thrown by cultural centers and clubs across campus. As we walk down the proverbial aisle of classes, we also keep ourselves in check by thinking about our budgetary restraints: one can only take so many classes per semester after all.

I can’t imagine having to choose my classes without first getting to know the professor in their element. Knowing what you don’t like is just as important as knowing what you do–shopping period is an effective way to eliminate options. During shopping period, I discover that though attractive on paper, some classes are just not the right fit for me. Alternatively, other classes I think will be boring because they are irrelevant to my major ultimately grab my attention like no other–a professor’s enthusiasm can make all the difference. In fact, some of my most interesting classes that didn’t count towards my majors became my favorites. Astronomy 130: Origins and the Search for Life in the Universe, for example, sent me into an existential crisis as I marveled at the size of the observable universe; Directed Studies: Philosophy sent me into a different type of existential crisis as I pondered my own existence. I realized just how silly and narrow-minded I was to think that my interests were limited to my majors.

While liberating in its endless possibilities, shopping period can also be a stressful time. Much of it does involve waiting—for smaller capped classes, students often enter a lottery or must apply by writing an email to the professor. It’s disheartening to hear you’ve been denied, and frustrating to hear you’ve been put on the waitlist (as now you are on edge the rest of the week, doing what one does on a waitlist: wait). Shopping period made me realize that I adore routine; I like knowing exactly what I’ll be doing tomorrow at 1:30pm. But during this uncertain period, everything is up in the air.

And I’ve learned to be comfortable with the unknown. More importantly, I’ve realized that with so many possibilities, it’s impossible to “go wrong” with my choice of classes. This semester, I had applied to an astronomy class I desperately wanted to take because of the sheer gusto the professor displays at every lecture. The class roster was published as a series of numbers–I checked my Student ID and could not find my ID on the roster. I was crushed. But my schedule began to shape up in my head with the back-up course I planned to take to fulfill my math requirement; everything was going to be okay. I could always take this course another semester. Ten minutes later, I took a closer look at my ID and spotted another series of numbers written at the top. I checked it against the list. I had gotten in.

Though overjoyed at being in the astronomy class, I realized my life was also going to be a-okay either way. It wouldn’t have been the end of the world. As shopping period wraps up, I gaze at what’s in my cart with joy. With a variety of classes from Creative Writing to American Fascism, my schedule is gonna Snap, Crackle & Pop.