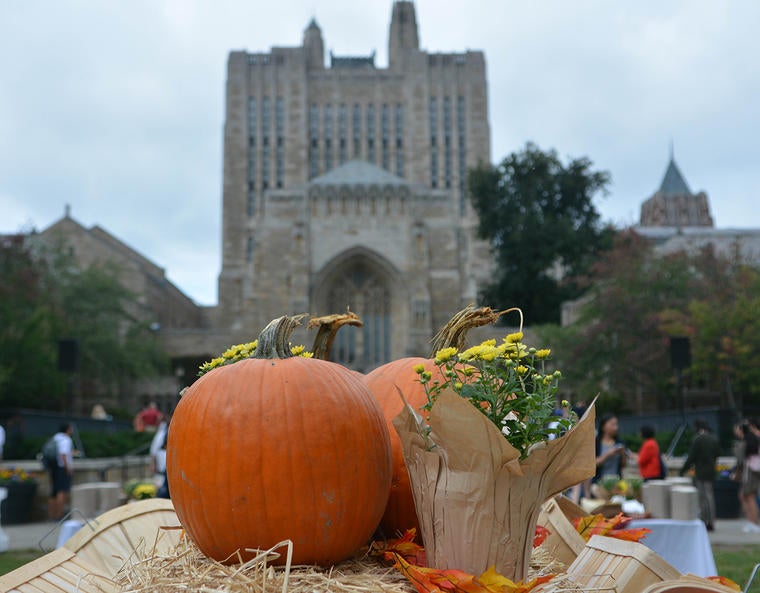 “Why didn’t you go home for Thanksgiving break this year?” you might ask. And my answer to that would be: “November was weird this year.” To elaborate, Thanksgiving always falls on the fourth Thursday of November, as you probably know. This year, November began on a Friday, so the fourth Thursday fell much later than usual. This caused there to be only one week of classes after Thanksgiving break instead of the usual two, and flying home for a week just to come back to Yale for a bit and then fly home again at the end of the semester just felt like an inefficient and unwise financial decision.

Luckily for me, Yale residential colleges remain open during Thanksgiving break, and up until the holiday itself, a few dining halls are still serving food as normal. It’s mostly business as usual, except for the fact that over half of the students have gone home. For some, the deserted campus may look lonely and depressing, but I love it. After living in New Haven for three and a half summers already, it’s fun to be here and kind of feel like I own the place, wandering around the gothic architecture and living like it’s my personal estate for a week. But when I do want to see people, I usually have some friends around to go adventuring with. With one international suitemate and other friends from the faraway lands of Texas and California, I’m never fully alone on campus. 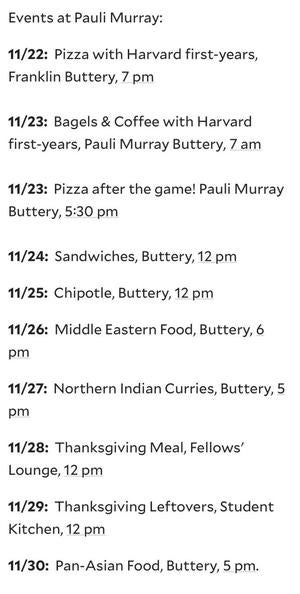 With all of this going on in Pauli Murray during the break, I definitely didn’t go hungry even after the dining halls closed.

I can also never become a true hermit during empty times on campus because of the events my residential college hosts. Over this past Thanksgiving break, the Pauli Murray GAs made sure we were well fed even after the dining halls closed. They hosted a Thanksgiving lunch complete with a whole turkey, stuffing, and all of the sides. (GAs are Graduate Affiliates: grad students in various Yale departments who are associated with the different residential colleges and help to host events for the undergrads in the college). Because there weren’t many of us around, there was usually enough food left over for me to take back to my suite for a midnight snack. Eating a full Chipotle bowl that’s been refrigerated for a while at 2 am is quite an experience. 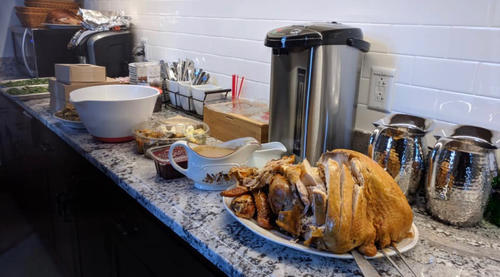 For Thanksgiving dinner, it was Zipcar to the rescue again as two of my friends and I headed over to Milford (that suburban town mentioned in a previous post) to dine at Cracker Barrel, one of the only restaurants open that day. We feasted on breakfast for dinner and then headed back home for some good sleep before Black Friday shopping.

Thanksgiving isn’t the only time I’ve stayed on campus when it’s mostly empty. For the past two Spring Breaks, one of my best friends from home, Carli, has come up to visit me at Yale and hang out with me and my friends. We’ve known each other since third grade, and since Spring Break falls around my birthday, my birthday present is her plane ticket up here. We’ve visited New York for a day, gone to the Art Gallery, and just adventured around New Haven. While it’s different enough to experience Yale when it’s nearly empty, it’s also unique to vicariously experience it for the first time through a friend. Combining those two experiences helps me see the campus in a new light, and I appreciate it a little bit more each time. 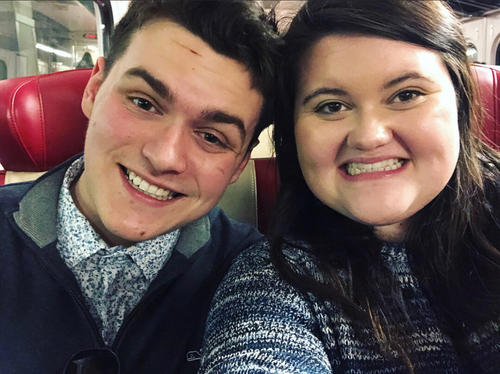 Best friends since third grade, on the train to New York for the day (2 hours one way, and a $39 round trip on the MetroNorth New Haven line.)