My Semester as a Music Major 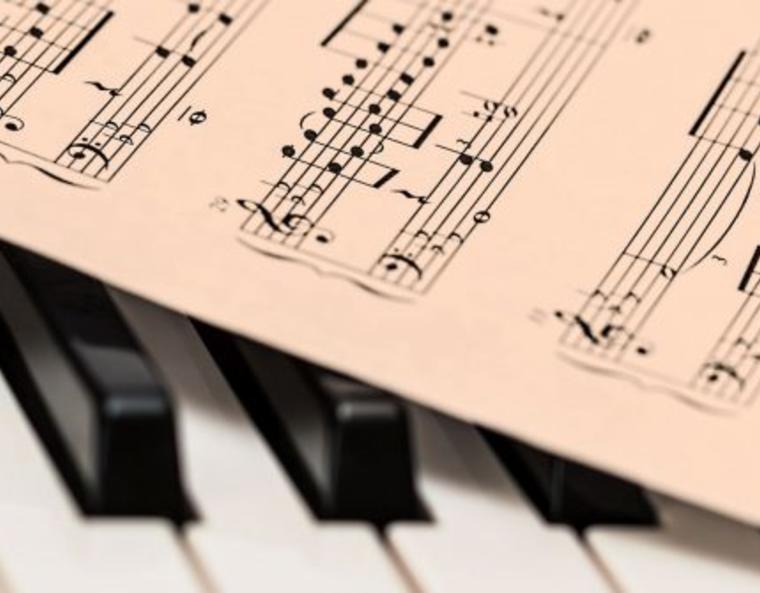 Marching band, and all of the events and travel that went with it, pretty much ate up my life during middle and high school. After starting out in sixth grade on the saxophone, abandoning it after two weeks and switching to the percussion section, where I stayed for the next six years, I was hooked. So much so that by my senior year of high school, I had successfully become one of the band’s two drum majors. All of my best friends were in the program, and I can’t imagine my life in high school without it. 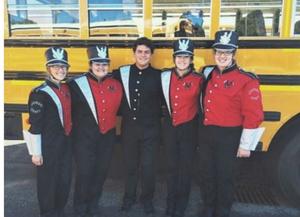 So why didn’t I decide to join the Yale Precision Marching Band, or any other musical group, for that matter, when I started at Yale? It’s not like there was a lack of them to choose from. In short, I just felt like I had done everything I could do in a marching band. It was time to move on. As far as other musical pursuits, I did rush some a capella groups during my freshman year, but I didn’t get tapped by any. I know now that these groups, especially the more well-known ones, were looking for a specific type of singer: the kind that you hear in Broadway shows, who really enunciates and sounds almost classical. At the time, my voice was more organic and a bit raspy: not better, not worse, just not the kind of voice that gets tapped for a capella groups.

At that point, I pretty much decided I was done being a musician. I really put my energy into doing research in the lab that I worked in at the time, and building up my CV. Until one fateful day during the shopping period of my junior year’s spring semester. I had three courses on my schedule, and I needed one more “just for fun” class to bring it to the acceptable four credits. On a whim, I decided to visit Music 110: Introduction to the Elements of Music. The syllabus said “Intended for students with no music-reading ability.” “Well,” I thought, “that isn’t entirely true for me, but there’s a chance I could’ve forgotten a lot in three years.” 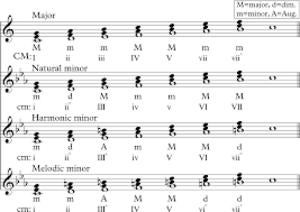 Roman numeral analysis, one of the many new things I learned in Music 110.

What followed was my discovery of one of the most fun classes I’ve taken at Yale. Roughly the first third of the semester went over things I already knew from my previous life as a musician, and I often was able to help other students understand some of the more complex concepts. By midterm, the course material had successfully exhausted all that I knew about music theory and continued into uncharted territory that I soaked up like a sponge. I was mesmerized by the different types of chords that one can create simply from moving a finger on the piano, and learning how to identify intervals by ear. After finishing the semester with a well-earned “A” in the course, I knew I wanted to continue. 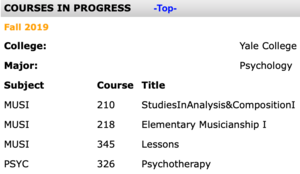 This semester’s course schedule. What would you think my major is?

So here we are now, in the first semester of my senior year. If you took a look at my schedule without knowing who I was and tried to guess my major, you would most likely guess Music. There are four courses, three of them in the Music department (and the fourth is in my actual major department, Psychology). In one course, we study sight-singing, more advanced interval and triad identification, and written dictation of pieces of music. In another, I’m learning how to reductively analyze pieces of 18th-century classical music, and write my own compositions using concepts from the period. And in my third music course, I work one-on-one with a graduate student in the Institute of Sacred Music, learning classical singing techniques and how to use my voice more effectively. I joke with my friends about how these lessons are causing my singing voice to lose its originality, but the truth is that I can just use it in different ways. If I had known how to sing like this three years ago, I may have even been chosen for an a capella group! Regardless of how that could have played out I’m happy that things turned out the way they did, and I’m so glad that Yale’s academics allow me the freedom to do intensive study in a subject that isn’t my major. I feel like my knowledge has been broadened by this semester of being a “fake music major”, and I look forward to seeing what else is in store with it during my final semester.