One of my favorite classes this semester was Neurobiology Lab. It was a complementary course to the neurobiology lecture course I was taking, and it was highly recommended on Yale’s course review server. My lab partner Kamran was a graduate student in Mechanical Engineering who was interested in learning some biology for possible robotics applications. I am a math major, so both of us were taking it as a class outside our normal curriculum. This made a fun combination for the semester. 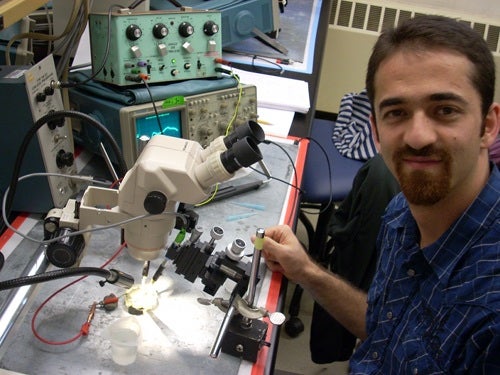 On the first day of the lab, we were instructed to shock ourselves with an electrical stimulator. There was little explanation given, other than not to turn it too high, and to keep the settings on alternating current, or we might die. Afraid for our lives, we turned up the stimulator volt by volt, wincing in anticipation but never feeling anything. About 20 minutes into the experiment, a student was brave enough to turn up the stimulator to about 50 V and felt a slight shock.

Our professor then explained a few lessons from our short experience. The first was never to bring preconceptions into scientific experiments, which might cloud our interpretation of results. Because we were so afraid of dying, most of us kept the stimulator around the 1-2 V range, never dreaming that anything less than 30 V wouldn’t get past our thick skin. The second lesson was that experimentation involved a lot of waiting, and to expect stalled progress until a breakthrough is found. “What was the most important thing that happened in lab today?” he asked us at the end of the class. He answered his own rhetorical questions: “Nothing. Most of the time you were just sitting around.” 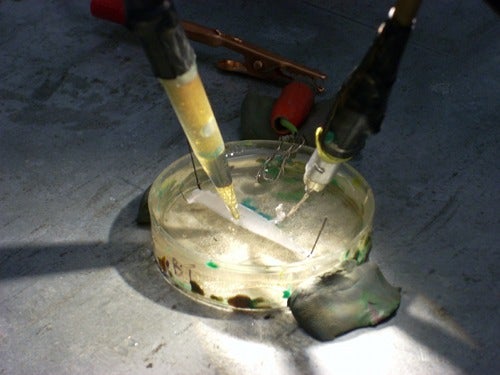 Later on in the course we moved on to more primitive organisms than ourselves. Nerves communicate by firing electrical action potentials down the axon connecting nerves, and we took advantage of this by placing electrodes on a variety of organisms and measured the shape and duration of the action potential. For example, in one experiment we placed a recording electrode on a frog leg muscle and a stimulating electrode on the nerve attached to the muscle. When we fired a shock to the nerve, the muscle contracted in response, even after being dissected from the frog. This experiment is a version of a classic experiment that taught us much of what we know about the connections between nerve and muscle. The experimental setup is shown above, and the response on the oscillator below.

There were many other experiments as well. Probably my favorite experiment took place with grasshoppers. We placed hook electrodes around nerves in the neck that carried specialized neurons that carried visual information. We then hooked the electrode to a speaker. When we waved our hands in front of the eyes of the grasshopper, we could hear the electrical response almost immediately. It was cool to discover how precise the responses were– the eye would respond to a single flick of a finger as well as a wave of the whole hand. 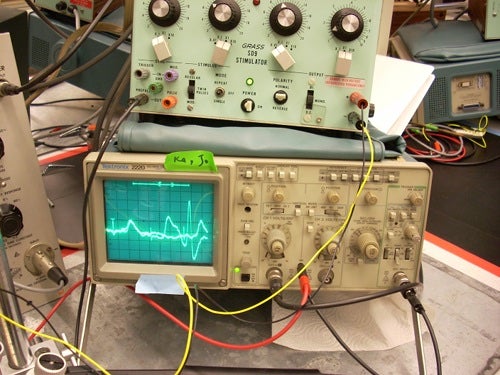 Overall, I was pleased with the quality of the instruction. I thought the instructors were very helpful and very patient as well– some of the experiments would cut into dinner time. Also, I had way more fun doing the experiments than I thought I would :) I hope this piques your interested in how science classes are taught here, if you have any questions you can leave them in the comments below.