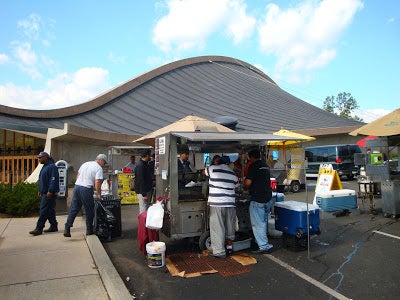 Our friend Martin wrote about the trek up science hill a few days ago. In his post, he mentioned the food carts that line Prospect Street, and the way starving science students huddled around the delicious food like “vultures.”

Well, I am one of those vultures. The smells of the food cart can just be too tempting sometimes, and when my stomach grumbles during genetics lecture, there’s nothing else I want more in the world than some grilled chicken and Pad Thai. So today, in honor of my addiction, I’ve decided to take you guys on a little investigative journey into the world of science hill food carts.

Many changes have taken place in the food cart scene since my freshman year. Back then, there were only a few Thai and Mexican carts lining Prospect Street. Now the number of carts has increased, as well as the diversity of the cuisine, including carts that prepare Bengali, Ethiopian, and Mediterranean lunches. The quality and prestige of the food as also gone up; full fledged restaurants are now capitalizing off the food cart scene by opening satellite carts with lunch offerings inspired by their restaurant menu. The Ethiopian cart I mentioned is an offshoot of Lalibella, a popular Ethiopian restaurant, and Caseus, a local cheese store, has also jumped into the fray by offering gourmet grilled cheeses and soups.

The location of the carts has also changed. While a few carts still remain on the street, most of the carts have taken over the parking lot of Ingalls Rink. With brightly colored umbrellas and the buzz of shouting vendors and hungry students filling the air, the lot almost has the atmosphere of a state fair. Now that they are face to face, competition between the carts has become more personal as well, resulting in better deals for the diners.

When I wandered over with my camera on a lazy Tuesday afternoon, I came too close to closing time to snap shots of the post-lecture hullaballoo that characterizes the lot. Instead I found vendors cleaning up their utensils, packing up their products, and serving the last few customers before they closed up shop. 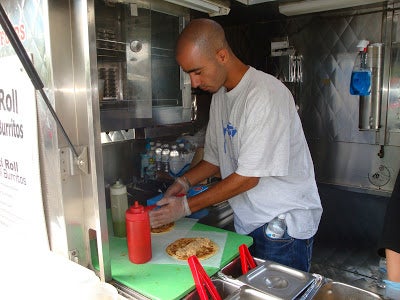 One of the carts was still open. Kati Roll, which specializes in Bengali burritos, is usually plagued by a long line of customers thanks to its $5 combo, which nets you two burritos and a free soda to boot. When I asked them to pose for a photo for me, only the woman behind the cart responded—the man was too busy making himself a delicious lunch. 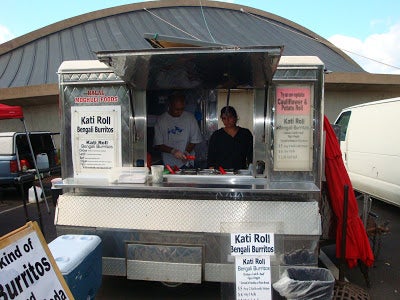 Another cart, Ali Baba, was serving its last customer of the day when I walked by. The chef efficiently prepared a chickpea dish over rice, and drizzled it with tahini sauce. I sheepishly asked the customer if I could take a picture of him with his food; turns out he was a Yale graduate student, and he readily agreed. 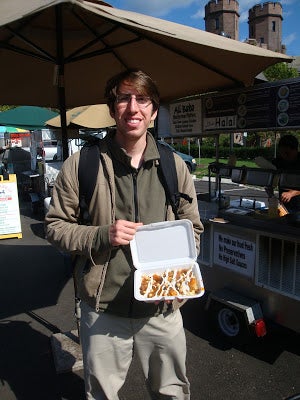 Since I had already eaten lunch that day (a bag lunch prepared for me by the dining hall, featuring a turkey sandwich, carrot sticks, and cookies), I decided not to partake in any of the tempting offerings. Walking back and reviewing the pictures I took, a part of me regretted that I didn’t get here earlier and take pictures of the full lunch crowd. But who knows, maybe if any of you decide to visit New Haven, you can experience first-hand the tantalizing smells and excitement of the food carts on Prospect.